Constant WaPo solvers may notice a bizarre number of themes that center around the idea of “home.” This time, however, the clues hold the master key to the front door.

THEME: Theme clues are phrases with “home” in them, and they’re reimagined in a literal sense. 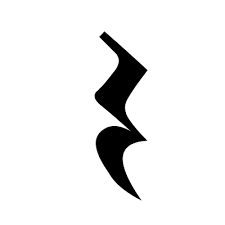 Sheet music is “home” to this kind of rest

Another straightforward offering that didn’t pose too much of a challenge. This is a great puzzle for people looking to get into crosswords. It’s consistently clued and easy to grok. The balance of zany/tricky/straightforward themes allows solvers at any level to dig in to a WaPo with a solid chance of it being on their wavelength. That being said, I’m suspecting there will be a curveball next week since we’ve had over-the-plate ones the last few Sundays.

The themer that took me the longest to see was RESTAURANT clued as [Starter home?]. It feels like a stretch, and with it placed in the NW, it’s the first one I uncovered. In a simple theme like this, I think I would’ve preferred it switched with LOS ANGELES so the theme presented itself more clearly from the get-go.

75A [Nintendo product with aerobics minigames] WII FIT. I tried it for about 10 minutes. Maybe burned a calorie or two. 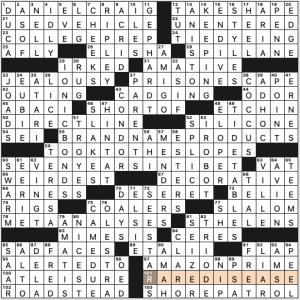 It’s that rarity, a themeless 21x puzzle. Frank Longo can wrangle wide-open spaces with the best of them, and so he’s managed to get corners with stacked 11s and 9s, plus tons of entries in the 7- to 17-letter range.

Fave fill: DANIEL CRAIG, TIE-DYEING, a Shawshank PRISON ESCAPE, SPILLANE, BRAND-NAME PRODUCTS (I have my loyalties), SEVEN YEARS IN TIBET (didn’t see it), scientific META-ANALYSES, AMAZON PRIME, and RARE DISEASE (I’m a big fan, can’t get enough of the rare diseases—well, actually, one or two is more than enough to have).

Much of the fill is ordinary stuff, with some clunkers like the ELOPER and MENDERS, crosswordese-type stuff like ERNES and SAAR and AMAH (which is a word my Asian mother-in-law actually uses! but she also does a lot of crosswords …).

Now, the main fun of themeless puzzles, for me, is locking wits with the constructor, battling through tough clues. When you bring the clues down to Sunday-puzzle difficulty, but there’s not a good wordplay theme to engage the funny bone, it’s perhaps less entertaining than one hopes for. 3.5 stars from me.

I usually like Gail’s puzzles, and this was no exception. It was an enjoyable solve for a cold, wet Sunday. Or any other Sunday. The theme answers all have “un” added to the beginning of an ordinary phrase. 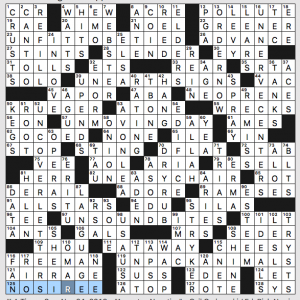 All the base phrases are solid and all the theme entries are amusing. I like it when there are theme answers going both across and down; for some reason, I find that very pleasing.

What I didn’t know before I did this puzzle: that Corinne Bailey RAE won a Grammy. I’d never heard of her, which was my loss. This song won Best R&B Performance in 2012.