An easy-breezy rhyming Monday. I thought this was Daniel’s debut because we didn’t have a tag for him, but it’s apparently his third NYT puzzle. 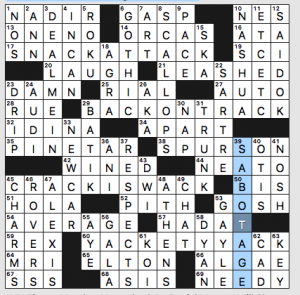 What I didn’t know before I did this puzzle: that NASHUA is New Hampshire’s second-largest city.

Happy Monday, everyone! I hope this holiday week will be one of great joy and tasty food (or at least the will power to avoid as much tasty food as we’d want!). Let’s dive into this puzzle: 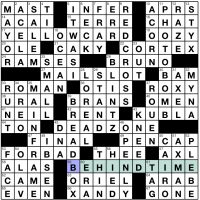 11D: PHOTO BOMB [Sneak into the shot]
17A: YELLOW CARD [Soccer ref’s formal warning]
27A: MAIL SLOT [Letterbox access]
35D: MAIN FRAME [iPad’s giant ancestor]
45A: DEAD ZONE [Area where cell phones don’t work]
59A: BEHIND TIME [Later than expected … and where the ends of the answers to starred clues may be found]

The second half of each theme answer follows time: time bomb, time card, time slot, time frame, and time zone. Solid early week theme and lots of grid real estate dedicated to the theme – not bad! Some of the extra theme real estate might have caused some of the fill to be less than ideal, but it was still quite the doable puzzle.

My only grumpy moments solving were things like FORBAD, the plural BRANS, ORIEL, and ROUEN. Oh, also Joan of Arc is the only woman referenced anywhere in this puzzle or grid, though plenty of men are referenced. Thumbs down there.

Our theme is SHADES / OF GRAY (37a [With 40-Across, distinctions that are neither good nor bad…], 40a […and a hint to this puzzle’s theme]). The other theme phrases all start with a word that is a shade of gray. 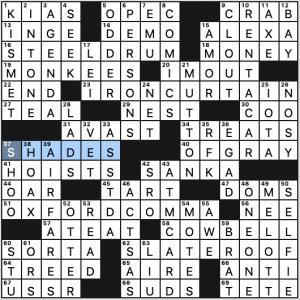 For whatever reason, I never knew there was such a thing as Oxford Gray. (Shouldn’t that be “Grey”?) Apparently it’s a very dark gray.

Interesting way to employ a 12-letter theme revealer across the center of the grid. Fortunately it breaks up easily into 6 and 6. This avoids having this uncommon length of a revealer in the 13th row which causes a fair amount of constraints to have to contend with. Of course, it’s less than ideal to break up a revealer at all, so you just have to pick your poison. Overall, this worked well and resulted in a fairly clean grid.

Faves in the fill include KISMET, MONKEES, RENTACAR (I wanted RENTAL CAR), MUTTON, COWBELL, and SELFIE. Goodies like these helped me fly through the grid, but I could’ve done without crosswordese INGE and SRO and weird plural DOMS. It was interesting to see fully-named MEL OTT in the grid, though.

Straightforward but accessible theme and a smooth, clean grid. 3.75 stars.

Another lovely and clean Patrick Berry contribution to the New Yorker tradition of publishing the best themeless puzzles around. This grid has exciting 9-letter vertical triple stacks in the NW and SE, paired with 8/8/7 stacks in the NE/SW, and the cluing was excellent as always. 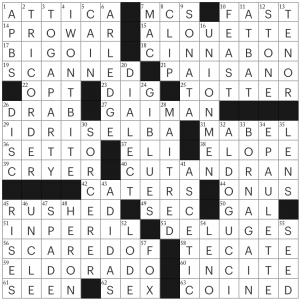 For that northwest stack, I was was hesitant to put in TOGA PARTY because I felt I had *just* seen it in a New Yorker, but turns out that was actually fellow New Yorker constructor Aimee Lucido’s NYT from last Thursday (and a Tracy Gray NYT in October). Interestingly, those were the first uses of TOGA PARTY in the NYT since 2013; I guess it’s in the zeitgeist this fall? The NW stack also featured my favorite entry of the grid, I WON’T BITE. Berry is so good at incorporating these colloquialisms that are nonetheless absolutely captured by his clues (“You needn’t be so nervous”). And the stack finishes off with TRICORDER, the mysterious multi-purpose Star Trek tool. Lovely.

The southeast stack was also fabulous, with ALDO GUCCI / BORN AGAIN / EPAULETTE making up the long entries. My only question here is whether the crossing entry CUT AND RAN (in the past tense) is a thing. I don’t know that I’ve ever heard it used, and googling it mostly just leads to crossword sites, so… idk. (And also the clue on CLIP – Cut out – is duped by CUT AND RAN). That said, the rest of the grid is just as shiny and clean as those corners, so I won’t hold an errant tense change and minor dupe against the puzzle!

All told, that’s a bunch of stars from me. Happy almost-Thanksgiving, all!

Will Nediger’s Universal crossword, “To Be in the Sky”—Rebecca’s review

THEME: AIRBNB – each theme answer is a double-b in the sky 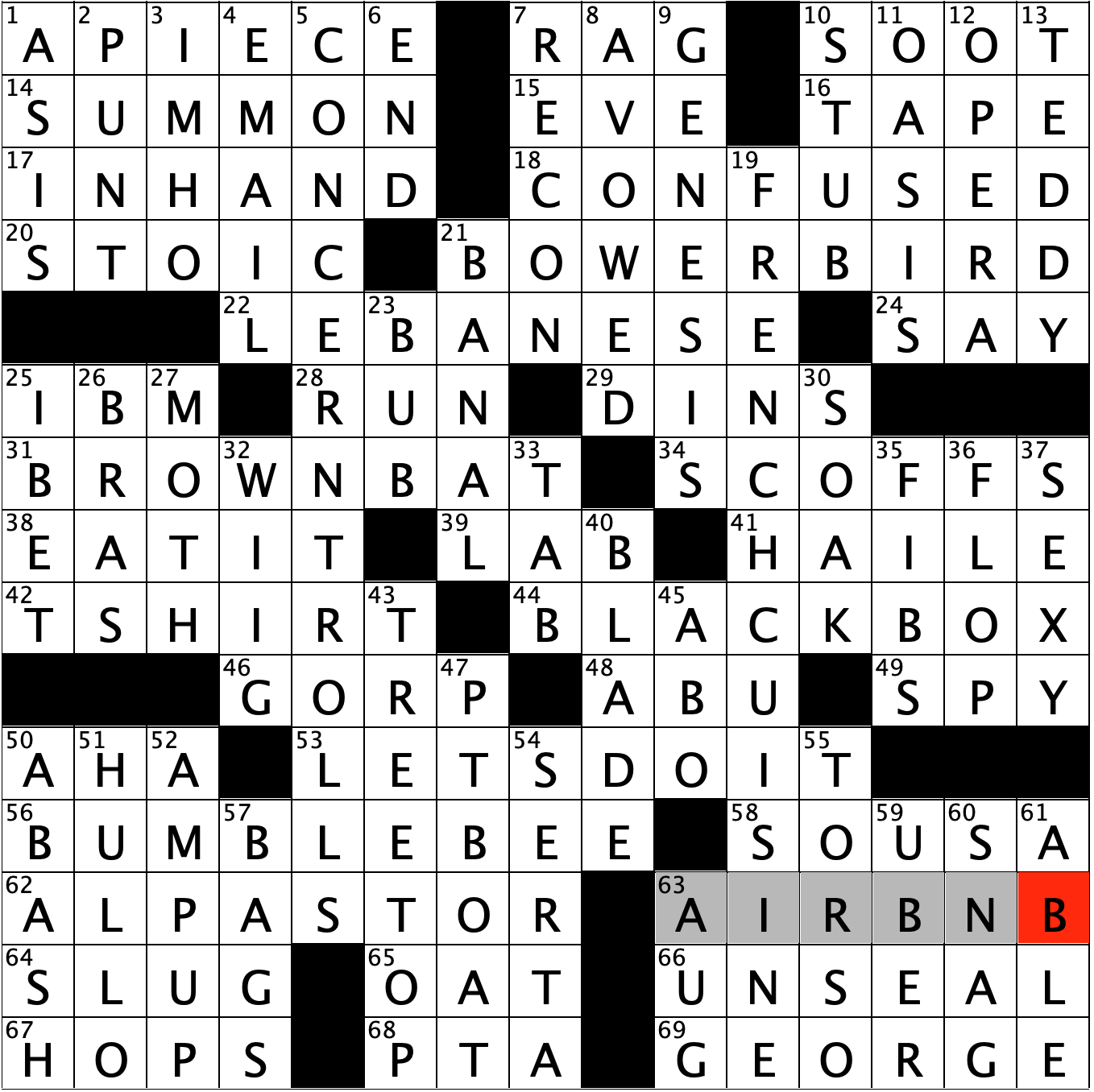 Great way to start the week. Noticed the Bs fairly early on, but the AIRBNB revealer was unexpected and a great way to tie it all together.

Great long downs with CONCERN TROLLS and FRENCH CUISINE, with some other fun fill throughout – WIIG, LET’S DO IT, TREE TOP, and SCOFFS.

Clue of the day goes to FRENCH CUISINE [Child’s expertise?].