Someone pointed out that last week I posted an incomplete grid. I thank the gentleman. 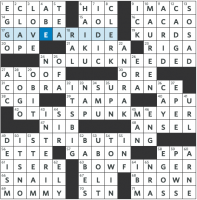 This week we’re looking for certain parts of the body. That seems both vague and specific.

The first step I saw right away. Each of the six themers hides a body part, like thus:

At this point I put the puzzle away and had to go to a work dinner. When I got home, I took the puzzle out again, and mentioned to a solving pal that I wasn’t seeing anything else that could lead to a solution. “There’s something else in the grid,” she said — and that was enough to get me to the next step — the Part Two suggested by the title — which was finding body-part words that corresponded to the parts in the themers encrypted in other entries:

For the final step, take the leftover letters from those entries to spell GLANDS — which are certain parts of the body and our answer. (Message from another solving pal: Do you have GLANDS? Me: I got plenty of glands, what’s it to you?) It might’ve been easier to find the second set of body parts had the extra letters all been at the beginning or end of the entries and not in the middle, but we can’t have everything.

[60d: “A-Hunting We Will Go” composer]: Thomas ARNE also composed “Rule, Britannia!” Here is Sarah Connolly singing it for the BBC’s Last Night of the Proms in 2009, and she has the glands to wear a Napoleonic War-era British Navy costume, and some bloke with even more glands is waving a pirate flag in the Hyde Park outdoor audience: