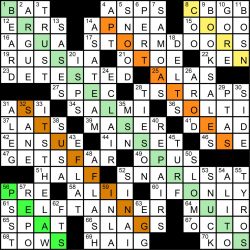 Hello there, everyone! Hope all is well with you as we quickly approach the end-of-year holiday season. (Honestly, how is it the month of December by the end of this week?!?)

As you all get ready for Thanksgiving, here is hoping that today’s crossword offering gets you in the mood to have some good, home-cooked meals. There is only one actual theme entry in the grid, SIDE, but that answer indicates everything that’s going on with all of the circles going diagonally (30D: [On the ____ (and how this puzzle’s Thanksgiving dishes are served — bon appêtit!)]).

After finishing the grid, I immediately looked back up at the northeast corner and to the COO entry, as I’m trying to think of all of the times that I’ve ever come across “bill and coo” outside of the old-time movie about a whole town of birds that did human-like tasks and actions (8D: [Bill’s partner]). I now know it’s a term used to describe romantic talk and actions, which, I guess, make sense. As much sense as a whole society of birds that drive taxi cabs, wash clothes, etc.

If all of the references to food failed to leave you fill, there’s SALMI (34A: [Highly-seasoned stew]) that you can dine on before having an ECLAIR for desert (24D: [Slender cream puff]). Loved the entry IT’S THE LAW, especially since the Crash Test Dummies (Larry and Vince…?) commercials of yesteryear have popped into my head (33D: [Phrase that follows “Buckle Up” on driver safety signs]). I know that the slogan that I’m thinking about is “You Could Learn a Lot From a Dummy: Buckle Your Safety Belt,” but I couldn’t help thinking about those commercials regardless. And I guess this time of the year, where celebrations are in high number and alcohol consumption will definitely be a part of those celebrations, to be extra, extra careful on the roads and how much you consume! A great holiday season is also a safe one.

“Sports will make you smarter” moment of the day: GORE (10D: [Clinton’s vice president)]) – Yesterday afternoon, current Buffalo Bills running back Frank GORE passed the legendary Barry Sanders for third place on the all-time rushing yards list in NFL history. The 15-year pro out of the University of Miami now has amassed 15,289 yards on the ground, only trailing Cowboys great Emmitt Smith and Bears icon Walter Payton on the career rushing yards chart.

Thank you so much for the time, people! Have a wonderful rest of your day and, as always, keep solving! Happy Thanksgiving! 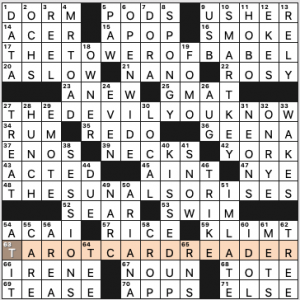 Short on time tonight, so a quick sum-up. Theme surprised me, as I won’t recognize the names of the various tarot cards out of context. Revealer is 63a. [One examining the starts of 17-, 27- and 48-Across], TAROT CARD READER. Those other three themers start with tarot cards:

Lively batch of phrases in the theme, and a little learning for those of us who don’t know our tarot.

The fill’s solid overall, on target for a Tuesday, and KISSED UP and SMART KEY are particularly nice.

Four stars from me, a good example of what a Tuesday puzzle ought to be like.

According to the constructor, the alternate title to today’s “Bottom Feeders” puzzle was “Colorful Characters” – let’s see whether those titles bear fruit: 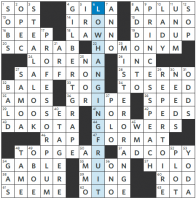 Each of today’s colorful themers features a fruit hanging at the bottom AND each fruit is one that would hang from its respective branch or vine, which feels like nice attention to detail. I really liked this theme! I loved the consistently strong / iconic pop culture angle to the theme entries, and plunking in the revealer made me smile. Also, any puzzle that features my icon and legend PRINCESS PEACH so prominently wins with me!

Other random thoughts:
– Look at the diverse, exciting slate of women represented in the grid! LORENA Ochoa, Tori AMOS, DAKOTA Fanning, Missy Elliott, PRINCESS PEACH, LADY, Queen NOOR of Jordan, Margaret Mead, and Yoko ONO.
– There was a slight inelegance with ADD ONTO crossing TO SEED but, otherwise, I have no GRIPE with this puzzle. Bravo, Ross! 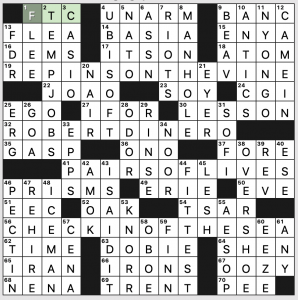 Matt is back with more puns, this time playing on a familiar phrase we all learned in like the second grade!

We have common phrases with the “I” and “E” switched around. It took me a minute to get the phrase referenced in the third one, but we are talking about pairs of Levis, a brand of jeans that I used to wear all the time 30 years ago, and I may need to buy a new pair! The best one is the last one, which is usually the way you want to line them up in a puzzle. Another job well done by one of the best. 4.4 stars today.

It’s a holiday week! Hopefully you have at least one or two days off this week! 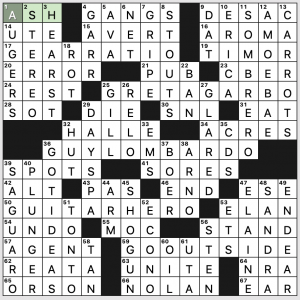 This is another byline I am not too familiar with, but that is OK! The last themer has the punny revealer:

Nice and neat! Not too complicated at all, which is how I like my Tuesday puzzles! I don’t have the time to do ALL the LAT puzzles (I am not Brian Cimmet!), so Kurt, if you have them on other days of the week, I may not see them all! But keep them coming! 4.3 stars for this one.

Everyone have a great holiday week!