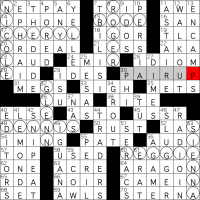 hello and welcome to episode #599 of matt gaffney’s weekly crossword contest, “Directors Meeting”. matt’s instructions this week tell us to look for a well-known movie of the 1990s. (more on this later.) okay, what are the theme answers? well, there aren’t any obvious ones in the grid—no long answers, and nothing explicitly clued as being thematic. but it didn’t take me very long to notice the first names of a bunch of people named MILLER in the grid:

so that’s four millers. are there more millers? should millers mean something to me? based on the title, i thought perhaps there might be a famous 1990s movie directed by two people named miller. i did some digging, but this does not appear to be the case.

more millers, though? sure. there are a whole bunch of other first names in the grid, and a second pass revealed some millers i didn’t know and some millers i just missed the first time.

so that’s eight millers, in four crossing pairs. in order from top to bottom, those crossing letters spell out OCNE. that’s intriguing—it’s almost ONCE and it’s almost COEN. the latter seemed more relevant, because there are two famous directors named COEN who were active in the 1990s. not only that, one of the other entries {Role for Bridges} THE DUDE is the main character of a different coen brothers movie (the big lebowski), and the entry {Cynical genre} NOIR is a frequent genre for them. could this be a nudge toward the right answer?

well, i googled list of coen brothers films and immediately found it: miller’s crossing, a 1990 coen brothers movie i just did not know at all. it has to be right, but i just wasn’t familiar with it, and the instructions had led me to believe that the answer would be a film that would be more universally familiar.

so, ok—this meta was interesting and good but not great. i wish COEN had been spelled out in order either from left to right (CNOE) or, better yet, top to bottom (OCNE), because that would have made more sense than … i guess it’s clockwise? i wish the answer had been more famous, or failing that, if “well-known” had just not been included in the instructions. i still don’t know if THE DUDE and NOIR are intended as hints (apparently miller’s crossing is indeed a noir) or just coincidences. (i also thought PAIR UP, located symmetrically opposite DENNIS, might be a theme hint as well.) some of the millers are more famous than others, and since it’s a very common surname, i think there’s some gray area in terms of which millers are famous enough to be theme answers. indeed, ANYA is in the grid, also crossing CHERYL, and i know somebody named anya miller (several of you do, too), although she is not (yet!) famous enough to be a meta theme answer. EPHRAIM is there in the same section and there are people named EPHRAIM miller, of course, although again, not necessarily famous ones.

so, some less-than-satisfying loose ends, but still an interesting meta. did you like it more or less than i did? let’s hear from you in the comments.