How many restaurants do you know that have a SECRET MENU? And what are your favorite items on that menu? The main one that comes to my mind is In-N-Out Burger here on the West Coast where you can order burgers and fries “animal style” (i.e. with added secret sauce). Can’t say I’ve ever partaken, though.

Anyhoo, that’s our theme today, brought to us by veteran constructor Christopher Adams. Each entry has the word “MENU” spanning two words 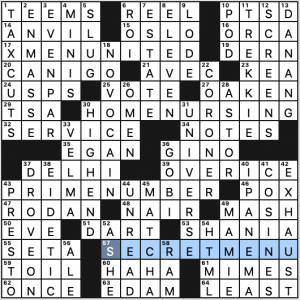 Only three main theme answers and one of them feels odd (to me, anyway). But then, there aren’t really any other crossword-worthy possibilities out there (I looked).

Only 72 words in this grid which is quite low for a themed puzzle. The fill is impressive given how low that word count is. Likes (in the grid): Geeky TREKKIE, RODAN, and ELEVEN [“Stranger Things” girl], NOVOCAIN, CORONER, EIDETIC (I think of actor Marilu Henner whenever I see this word), HIGH END, IPANEMA, TAX CUTS, MATCHA, “CAN I GO?” and VELMA (even though it’s not Scooby-Doo’s Velma).

Speaking of which, VELMA [Roxie’s rival in “Chicago”] belonged in a group of uncommon proper names that might be part of the reason this grid felt a little tougher than usual. Also in that group: GINO [Futurist painter Severini], NAIR [“Mississippi Masala” director Mira], and EGAN [“A Visit from the Goon Squad” author Jennifer], though I’ve been able to remember that last one from previous crossword appearances.

Fave clues: 7d [What you will] for ESTATE and 31d [We’re all in this together] for UNIVERSE.

Serviceable theme, but the fill is the star here with lots of goodies and few gunkies. 3.8 stars. And don’t forget to give us your SECRET MENU tips in the comments. 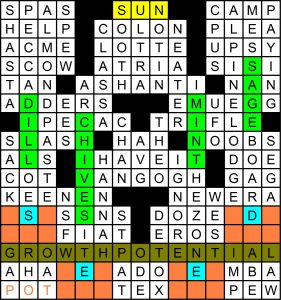 Visual extravaganza today, for which I expect the Orca for Best Crossword Review Grid. But I had help — Matthew and Jeff put a lot in here. We’ve got the SUN aptly clued as [Energy source for plants] up top, and a plant in each of the long downs:

2d. [Minor indiscretions], PECCADILLOES. Fun word, but if you’d’ve asked me to spell it cold I might have gotten it very wrong. Friendly crossings, though. That’s DILL growing inside it.

24d. [Declaration from someone on a hot streak], I’M IN THE ZONE. MINT. Excellent entry that desperately wanted a funner clue, like [“No one and nothing can stop me today!”] or similar.

10d. [Where trolls may lurk], MESSAGE BOARD. SAGE.

Next, we’ve got a circled S-E-E-D spelled out from the bottom letters of those four entries, which is a pretty big further constraint on the four main theme entries, and makes for a nice visual. And then finally we’ve also got POT in the lower-left clued as [Herb garden vessel … as depicted four times by black squares in this puzzle]. And as you can see, there are four pot-shaped clusters of black squares, each cradling part of the SEED. Nice touch! Pot…herb…I see what you did there…

The danger with a visual puzzle like this one, with many elements, is that they won’t play as one harmonious whole, but rather as a disparate jangle of aspects that compete with each other instead of complementing each other. We have quite the opposite of that here: You’ve got your pots, each with a seed (well, a part of a seed, but that’s nitpicky), and then each entry is a stalk with an herb growing up towards the sun. That’s a harmonious visual idea to my eye, and well executed with many constraints.

Two quibbles: 1) I find NYT puzzles are often curiously mistimed; I recently reviewed a puzzle here centered around curling that ran in early fall; why not dead of winter? And here we have a puzzle that’s all about springtime and we’ve got it running the day before Thanksgiving. Seems like a little more thought could be put into scheduling; on 95%+ of puzzles it won’t matter, so why not make it count on the few where it would? 2) Maybe asking too much, but everything wants to go up in this grid — you’ve got GROWTH POTENTIAL (which I forgot to mention) at the bottom, and the pots and seeds, and then the plant stalks of the long downs, and the sun pulling everything up into its warmth. So why not have the herbs themselves going up? Something like SHALL I DO IT for DILL, keeping the S in SEED but adding the visual of the herb itself also going upward. Maybe they tried this and it wasn’t possible, though. [Edit: wait, SHALL I DO IT wouldn’t work since the S still has to be at the bottom. Something like COLLIDERS then. Not a great entry, I know.] 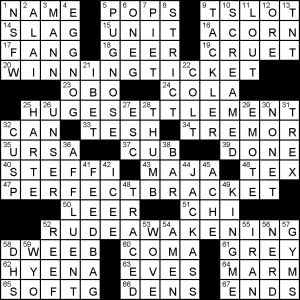 This puzzle comes straight out of sitcom melodrama. “Lucky” gets a WINNINGTICKET, a HUGESETTLEMENT (the idea that this is “lucky” feels off to me though), and a PERFECTBRACKET (lovely answer, that) only for a RUDEAWAKENING that it was “all a dream.” 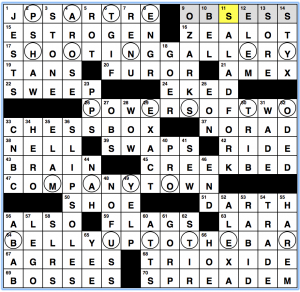 Hello all!  May you all have smooth travels to your Thanksgiving destinations.  Mine was…less than smooth, but one large nap later and I’m finally ready to tackle this week’s AVCX from Byron Walden.  Let’s poke at this theme to see what’s going on:

I’m going to be up front: I generally don’t like puzzles with the letters needed spread out across the length of the word, and this was no exception.  I also disliked J.P. SARTRE at 1A – John-Paul Sartre’s first name is spelled out everywhere online, and even if I dig down a few pages of a search, I can’t find somewhere that refers to the author of No Exit as “JP”.

Regardless, his name includes PÂTÉ, SHOOTING GALLERY includes HONEY, POWERS OF TWO has PESTO (which I think of as a particularly thick sauce rather than a spread, but whatever), COMPANY TOWN (Bilund, Denmark is the one for LEGO) has MAYO, and BELLY UP TO THE BAR has BUTTER.

I am unable to find a full version of “Mrs. Premise and Mrs. Conclusion visit Jean-Paul Sartre”, so please enjoy this other philosopher sketch from the Pythons.

This was a trickily clued grid – I liked how CREEK BED (“Streaming channel”) and SALAD FORK (“Napkin neighbor”) were clued in particular.

Happy Wednesday, all, and safe travels for your Thanksgiving.