See below for news regarding the fate of the Chronicle of Higher Education crossword. 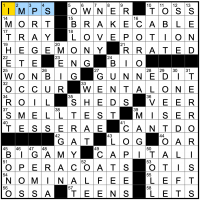 Hello F(r)iends, Amy is visiting family so you get me, tired from cooking all day and full of food and delicious beverages. I found this fairly chunky to solve (took way over my Friday average of about 13 minutes). But, I’m not in the best solving mindset at the moment, so [1d: “Ugh, totally my fault!”]: I’M THE WORST. Here are few interesting entries:

[2d: “Stay tuned!”]: MORE TO COME from the rest of Team Fiend as they finish up their Thanksgiving dinners (those who are in the US, one assumes; we Fiends are a global phenom). Hope the holiday has been delicious for you and yours.

Happy (belated) Thanksgiving, all! I’m grateful to have this space to ramble about puzzles I almost always love, and for the wider crossword community in general. I’m also grateful for Natan Last, whose puzzles are pretty much without fail the most on-my-wavelength of any I have the pleasure of solving. Today’s MASTERPIECE is no exception; it’s fresh and clever, and packed with that trademark New Yorker trivia. It’s also a fabulous grid design, with only 10 3-letter entries in the whole grid by my count (although I’m notoriously bad at counting, so if I missed some, let me know). 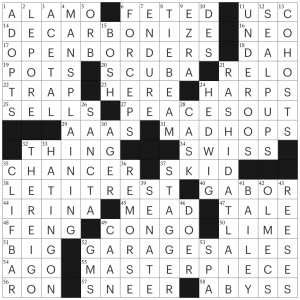 The long stuff really shines in this puzzle—all told, we have 6 11’s, most of which are pure joy. In the northwest, we’ve got DECARBONIZE and OPEN BORDERS (cue “this is the future liberals want” memes), and in the southeast we have GARAGE SALES and MASTERPIECE. The Down 11’s are equally fabulous: MANSPLAINING down the west and RASHIDA TLAIB in the east are both fresh and fun (although I suspect we will see some complaints about MANSPLAINING—this is the internet, after all).

Other fun longer entries include UNDEROOS (which I believe is a brand of kids underwear?), COHOSTS clued with Bodega Boys hosts Desus and Mero, CLIF BAR, and HATING ON. All sorts of good stuff packed in here, with very little junk.

The kitchen is clean! I came down this morning and all I had to do was empty the dishwasher and wash the pots we left soaking last night. I love having a helpful teenager.

I enjoyed this puzzle. Each theme entry is a familiar rhyme reversed for enjoyment’s sake. 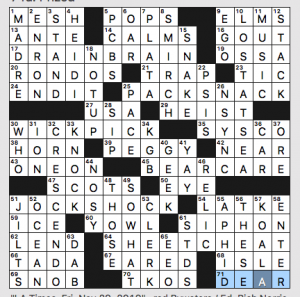 All the base phrases are in the language, although PICKWICK is one word and a proper name, at that, so it’s not completely consistent. I’m OK with that inconsistency.

What I didn’t know before I did this puzzle: I’d never heard of tholes. A thole is fitted to the gunwale of a boat to act as the fulcrum for an OAR. I’ve seen them, but didn’t know what they were called. They often look like this:

First, some unhappy news: CHE editor Brad Wilber made the following announcement a few days ago on facebook:

It is with great sadness that I report the Chronicle of Higher Education is discontinuing its crossword puzzle at the end of February 2020. After that date, print production of the Chronicle is scaling back to biweekly, and they tell me it will focus sternly and solely on news. A CHE dignitary who has championed the puzzle for years has recently passed away, and the shared vision of younger decision-makers (admittedly, partly survival mode for the publication, I think) says that the crossword strays too far from the mission.

You may wonder if a letter-writing campaign will save the puzzle. Their web team, in particular, has been thrilled not to have to deal with it this year, so my sense is your pleas will mean little unless you express willingness to subscribe to the publication or to the puzzle if it’s placed behind a paywall. If you do write, please be kind, and take care to remember that you have only had online access to it lately because one member of middle management agreed to turn a blind eye while I posted it myself. Here is the link with contact information for Michael and Liz, the editors, even if you just want to say thanks for enjoyment of the puzzle over the years:

Thanks to Crossword Fiend for both covering and hosting the puzzle … Thank you to the many crossword friends who have been valuable sounding boards, to previous editors Patrick Berry and Jeffrey Harris, and to the solvers who have let me know the CHE puzzle was something they relished and made part of their routine. It has been one of the most rewarding learning experiences of my life. Maybe I’ll have the chance to put editorial chops to use in some new puzzle venture before long. It would be a privilege to have constructors and readers follow me there. 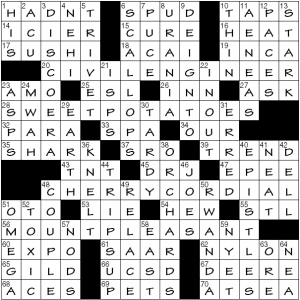 I will certainly miss the CHE puzzles, filling as they do a particular (vibey™) niche and with a distinctive editorial hand. A consistent bright spot in the crossword week.

On to this week’s crossword.

Nice indeed. A nice, easy theme for those in postprandial addlepatedness or torpor.

Nice how the first two begin with the synonym and the second two end with it. All two-word phrases, by the way.