Synonyms for “speed” are found in the circled letters spread across two entries with an added “bump” in the middle. 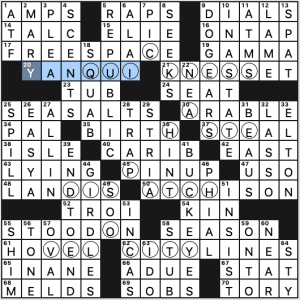 The synonyms in question are QUICKNESS, HASTE, DISPATCH, and VELOCITY. The first one is a rather drab choice, but it’s made up for by its interesting components: YANQUI and KNESSET. The LANDIS / ATCHISON combo is also worth noting.

I think this would have been a lot more fun to work out without the circles, providing the solver with added ambiguity and therefore more of a challenge. Maybe if this grid ran on a Thursday we could have had it in such a way. But now I see that HASTE would have been difficult to find since its components are not long entries.

My toughest moments in the solve were the ELIE / PIC crossing since I have never heard of Lebanese fashion designer ELIE Saab and [Shot] is an ambiguous choice for PIC. The other tough entry for me to parse was END-TO-END (clued as [In a tight row]). Needed every crossing before the light came on.

Fave entries include DOG-EARS, SEA SALTS, GIRDLES, FREE SPACE, SQUAB, REPUBLIC, and BUCKEYES (as an entry, not as a team).

And that about does it. The circles took most of the challenge out of this making it more straightforward than it needed to be. As it is, there’s just not a lot to grab your attention. 3.25 stars. 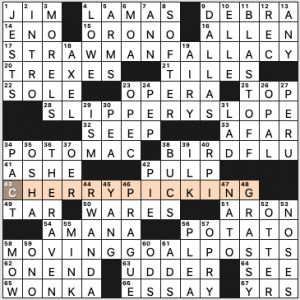 Many the types of logical fallacies (hello, definist fallacy!) don’t lend themselves to any sort of playful approach at all. The constructor’s chosen four that use familiar things in them, and clued them in a literal way that also works as an example of the logical fallacy in question, I think. The puzzle really needed a title, and maybe a replacement for STRAW MAN FALLACY so “fallacies” could have been in the title. Feels more like a Chronicle of Higher Education crossword sort of theme (but alas! the Chronicle will be discontinuing its crossword next year) than a newspaper puzzle theme.

Bechdel glimpse: male vibe to JIM, LAMAS, ENO, Marx Brothers, Odysseus, Lincoln, ASHE, Elvis, Willy WONKA, LOWE, BUCS, and Sean ONO Lennon; female vibe to DEBRA and ANN Landers. 12 to 2, that’s a –10. Bzzzzzt! Wild to go with a less famous man rather than his mother Yoko ONO. ALLEN could have been clued as actress Karen instead of the wrench.

Always nice to see THE RAVEN, BLAST OFF is good, and I like having PRAGUE here since a friend just moved back there. Overall, 3.25 stars from me. 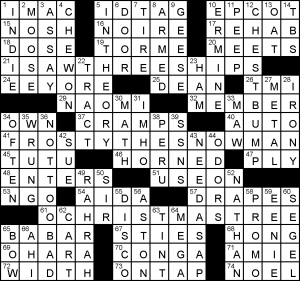 Christmas creep means it’s considered normal to blast these songs on the 4th of December. At first it just seemed to be three Christmas/winter songs: ISAWTHREESHIPS (just weird lyrics that one), FROSTYTHESNOWMAN and OCHRISTMASTREE which is pretty thin gruel. The bonus that ties it together is very clever though – they are NOELS with NOEL (no ‘l’) in their titles.

My favourite moment was [Summer songs?] for DISCO, given a few of the other short clues being somewhat thematic this was a fun fake-out.

Lastly, I’m not sure I’ve heard of a >CHEST<BUMPthough I think I can visualise it.

THEME: A puzzle of intrigue today, with each theme answer ending in a SCHEME 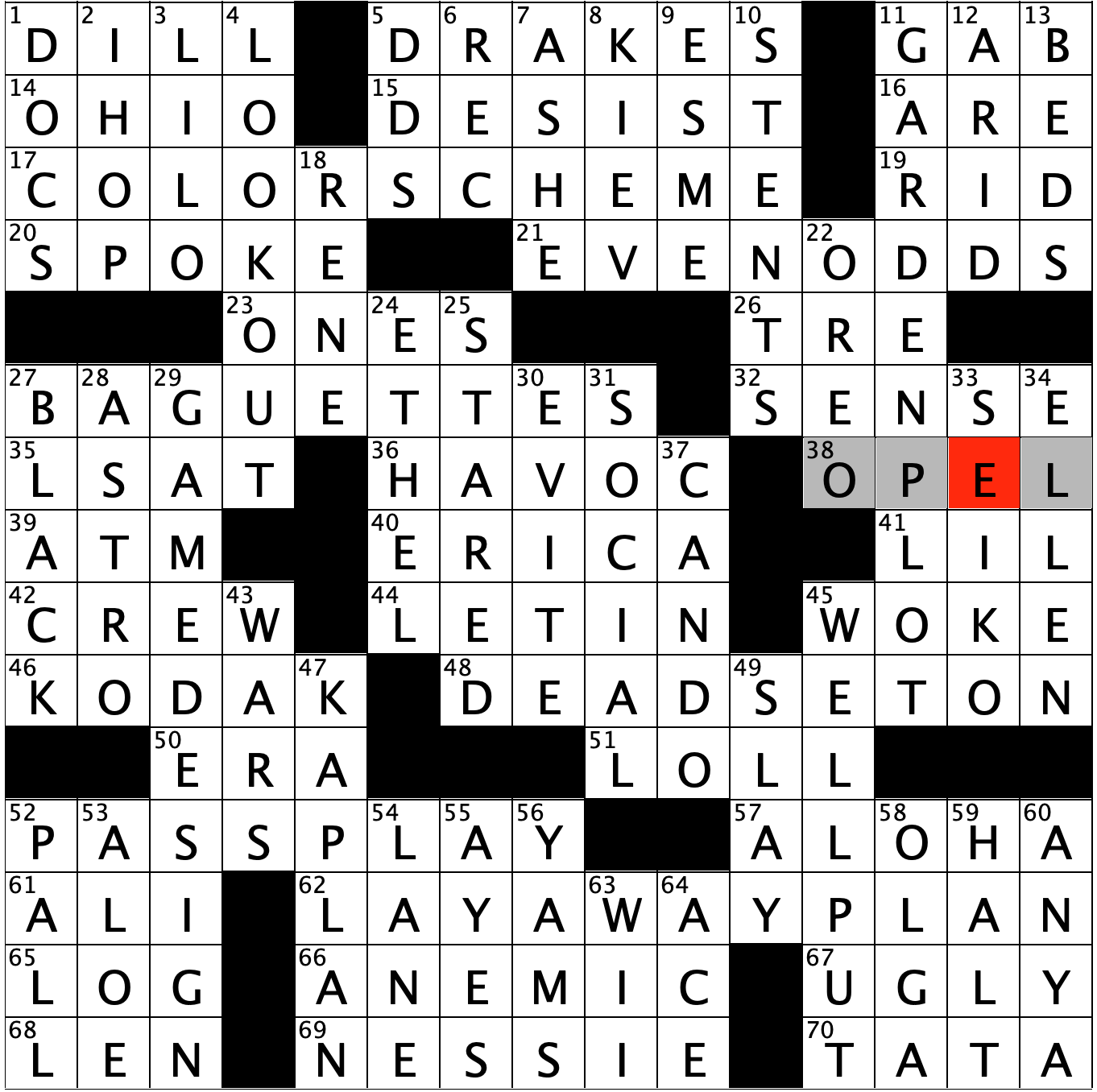 This puzzle was a joy to solve. I see the theme while solving, but thought it was well done once I finished. Really nice mix of of unrelated things coming together.

The fill on the puzzle is fantastic – DEAD SET ON, CAN DO, WELL PUT, and LOOK OUT were my personal favorites, but this was so incredibly smooth all over and really a lot of fun.

Some great clues I have to mention as well – TRE [Amount past due?], CREW [All hands on deck], and ALOE [Vera’s leader?] were all fantastic to come across while solving.

Some ETHEL Merman for your evening 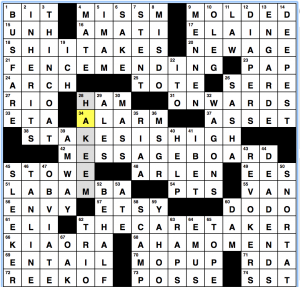 Howdy!  Thanks to back-to-back meetings, this is going up late, but better late than never.  This week’s AVCX from Ben Tausig clicked nicely with my music-inclined brain, though I understand why an easy remix got sent out to make things clear.  Here’s the revealer:

Well, when I think of ’80s songs that involve A-HA, there’s only one I think of – “Take on Me”.  Appropriately, there are exactly 3 spots in the grid (which were neatly marked with circles if you selected the easy remix) that illustrate that song title:

And of course, AHA MOMENT contains the ME needed for that final representation of “TAKE on ME” in the grid.

I’m leaving things there, but one fun piece of trivia to fill out one of the clues: as noted in 51A, LA BAMBA (specifically, the Los Lobos cover) is “One of three Spanish-language songs ever to reach #1 on the Billboard Hot 100”.  The other two?  “Despacito” and “Macarena”.  I’ll leave you with this moment of zen – happy Wednesday!