TURNED THE TABLES (57a, [Reversed an unfavorable situation, and what you did in the theme answers]) is our indicator that the long Across answers have kinds of tables in them and that those kinds of tables are turned in the Down direction. 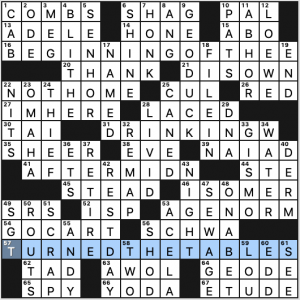 End table, water table, night table. I feel like I’ve heard “night stand” far more than “night table” in my life, but that may just be me or a regional thing. Google’s Ngram viewer puts the two phrases on an even par. There are a great many kinds of tables though (pool, periodic, round, coffee, etc.), so I would have preferred a more universal choice.

I definitely needed the revealer because on my first pass I had entered all the table words as rebuses.

Fill-wise, NOT HOME and I’M HERE make for a humorous stack in the West while that grouping in the East (NAIAD, ISOMER, AGE NORM) should satisfy you highbrow types.  I liked seeing GEODUCK (pronounced “gooey duck”) which is popular in my neck of the woods (Pacific Northwest). And a REST DAY sounds good right about now. BLITHE and LIVID also make for a good contrast of not-s0-common words.

In the “Huh?” department, I question the spellings of GISMO and GO-CART both of which look wrong to me. Maybe they’re British.

Nice puzzle with a Thursdayish vibe, solid fill, and some good cluing. 3.8 stars.

This is the last Fireball of 2019 and it’s a good ‘un. The title tells us there’s something going on with birds. It took me a while to figure it out, and it was worth the wait.

Each theme answer has a rebus square that is a DUCK going across and a SWAN going down. 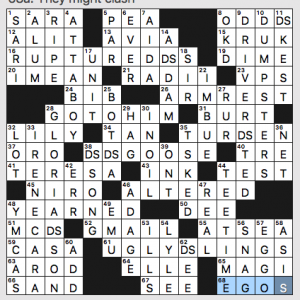 And to tie it all together: 61a [Awkward youths who mature beautifully (and a hint to this puzzle’s transformations]: UGLY {DUCK}LINGS crossing 62d [Al Jolson standard], {SWAN}EE. (That’s the George Gershwin tune, not to be confused with the Stephen Foster standard “Old Folks At Home,” familiarly known as “Swanee River.” And yes, I did confuse the two a few weeks ago. Thanks to janie for setting me straight. The Gershwin song is featured in the movie “Swanee River,” just to add to the fun.)

Back to the theme: original, challenging, fun, and solid with the one minor exception noted above. Thanks to Andrea and Mark! 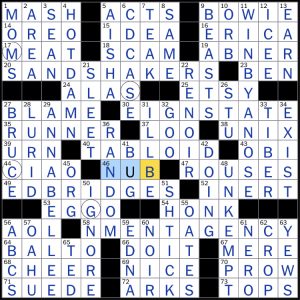 It’s Thursday!  Let’s solve the NYT.  Neville Fogarty constructed today’s puzzle, and it has four theme entries, each near a circled square, that don’t quite make sense on their own:

It all snaps into place once you think about the circled squares being OVER each answer:

I thought this seemed relatively breezy for a Thursday, but I didn’t mind, since it felt well-constructed.  I didn’t expect to see HOT DAMN in the grid (stepping it down to HOT DANG until I realized BLANE needed to be BLAME and RUNGER was RUNNER), and I liked both WIN BY A NOSE and ANNABEL LEE elsewhere in the down fill. 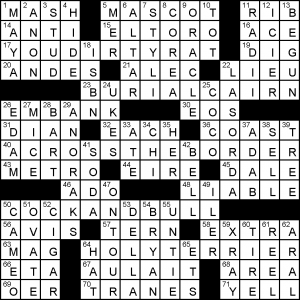 Interesting premise: “___ Terrier” dog breeds found at the end of words. I have two issues with the execution though.

Firstly, and less critically, BURIALCAIRN is pretty desperate as answers go, though how else would you get CAIRN in your puzzle. ACROSSTHEBORDER and YOUDIRTYRAT are more colourful. The latter I only know as an alleged Cagney phrase from Fawlty Towers. That and articles pointing out he didn’t say it, ironically. COCKANDBULL is surprising, since isn’t that actually BULLSHIT just shortened?

The bigger issue is HOLYTERRIER – not a real phrase – and clued in reference to Batman but “Holy terror, Batman!” is not a classic Robin phrase. It’s not here: LINK. Rather baffling.