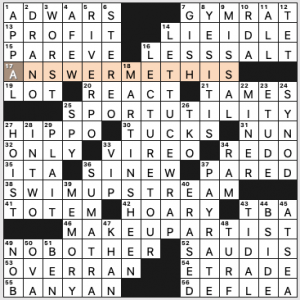 Andrew’s 68-worder deviates from his frequent “stagger stack” vibe … no, wait, it doesn’t, the stagger stack is just vertical instead of horizontal. Those three 11s in the middle cross a quartet of spaced-out 12s.

Fave fill: “ANSWER ME THIS,” LESS SALT (it’s a lifestyle), SWIM UPSTREAM, MAKEUP ARTIST (it was a makeup artist who found my new phone and returned it to me! he deserves every one of the stars tattooed on his head), a BANYAN tree, “YES IT IS” (because now I’m thinking that yesitis is the condition wherein you say yes to too many things), LETTUCE WRAP, MARTIN SHEEN, and PLAIT (because of all the plaited breads on Great British Bake Off).

Not keen on the British spelling APPAL (GBBO be damned) and DEFLEA (which is a word, but ick).

I maintain that there is no simple pleasure in this world that measures up to solving a themeless Erik Agard puzzle while drinking coffee first thing in the morning. Although I suspect some solvers may bristle at the youthyness(™) of this puzzle, crying out MAKE IT MAKE SENSE! while trying to parse SHE/HER/HERS and “Thanks, I hate it,” everything about this puzzle makes puzzling exciting for me. 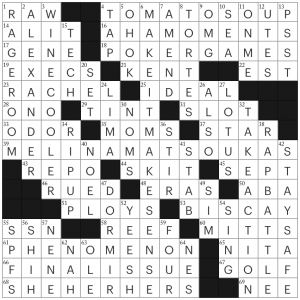 For starters, recognizing that “Queen & Slim” director MELINA MATSOUKAS is a perfect 15 and sticking her right in the middle of the grid is prototypical Agard, as is a cluing ALEXANDER as the author of “The New Jim Crow.” And now that I’m counting, we also have NENE Leakes instead of the famous crosswordese Hawaiian bird; GOLF clued for Ko Jin-young, the 24-year-old LPGA star; and FOUR clued as the number of women in a Nina Simone song. Erik’s mission of highlighting women of color and other underrepresented crossword demographics just makes my heart happy. (And we also have our second NYer in a row featuring a RACHEL, make of that what you will).

Overall, this is a near-perfect themeless puzzle. All the stars from me.

Also! USA Today recently announced Erik as the new editor of their crossword puzzle, so I think we at Fiend may need to add a new puzzle to our rotation? I’ll take it up with management. 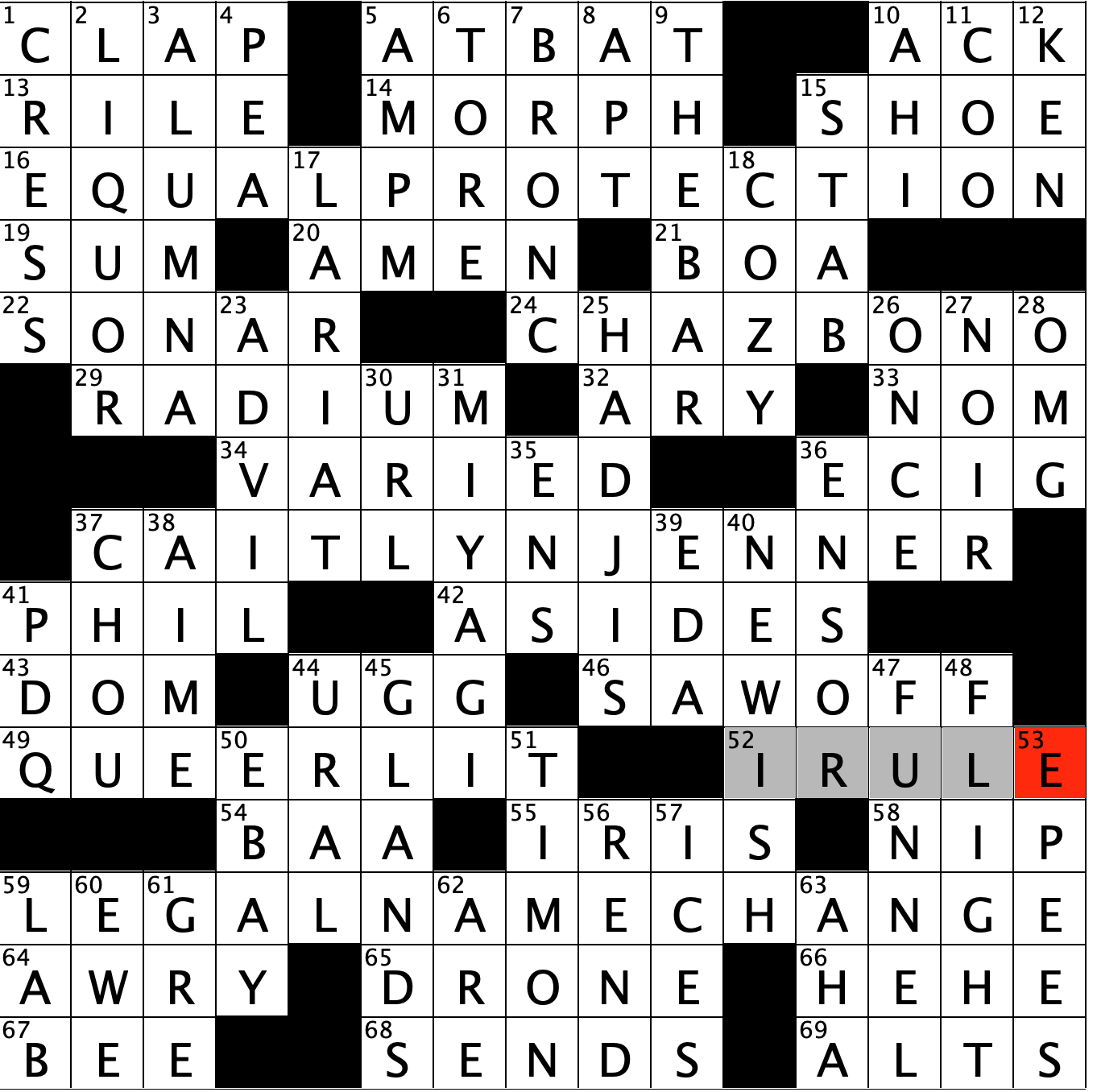 No matter how high my expectations are when it comes to an Inkubator puzzle, I find I am consistently impressed – and this week was no exception.

This theme is so well executed – the consistency of the cluing, plus this answer set that manages to be fresh and fun, while having a clear message – made this a really enjoyable solve. The mix of high-profile celebrities with the more political action answers, made it exciting to come across each new theme answer as I made my way through the puzzle. The set also feels really complete, as I cannot come up with any other trans+another word words that would work here.

The fill and the cluing here is great as well. Favorite cluing moment was the pair of sub-clues with SONAR [Sub detector] and DOM [Sub commander?] that use very different definitions of that word. The clue for KEN [Toy made with no plastic junk?] was also absolutely perfect.

I also loved that the clue for URL [www.happybirthdaymarsha.com, for one] ties into the theme as well, pointing to a site with a movie about transgender activist Marsha P. Johnson. Trailer here: 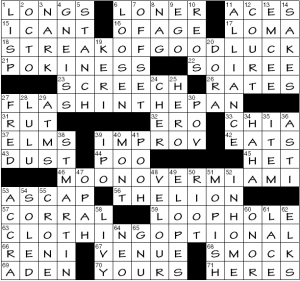 It took me a while to figure out what was going on with the theme. This is not a complaint. I enjoyed the puzzle and the revealer not only explained the theme but amused me.

Each theme answer takes a base phrase and changes a sound. 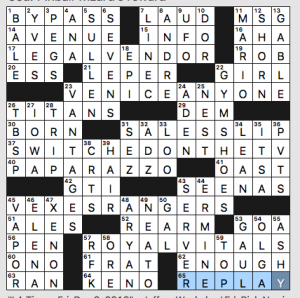 And the revealer, which spans the grid in the center: 37a [Got ready to binge-watch … or a hint to phonetic changes in four puzzle answers], SWITCHED ON THE TV. Each theme answer puts a V sound where the base phrase has a T. All the base phrases are solid; the revealer’s a stretch (the sounds are switched, not switched on) but I’ll take it.

What I didn’t know before I did this puzzle: that PAPARAZZO is the singular form of PAPARAZZI. The puzzle is untimed because I spent a long time searching for the error. It helps to look at the crossings.

THEME: CHEESE BALLS four circled cheeses can be found within the grid 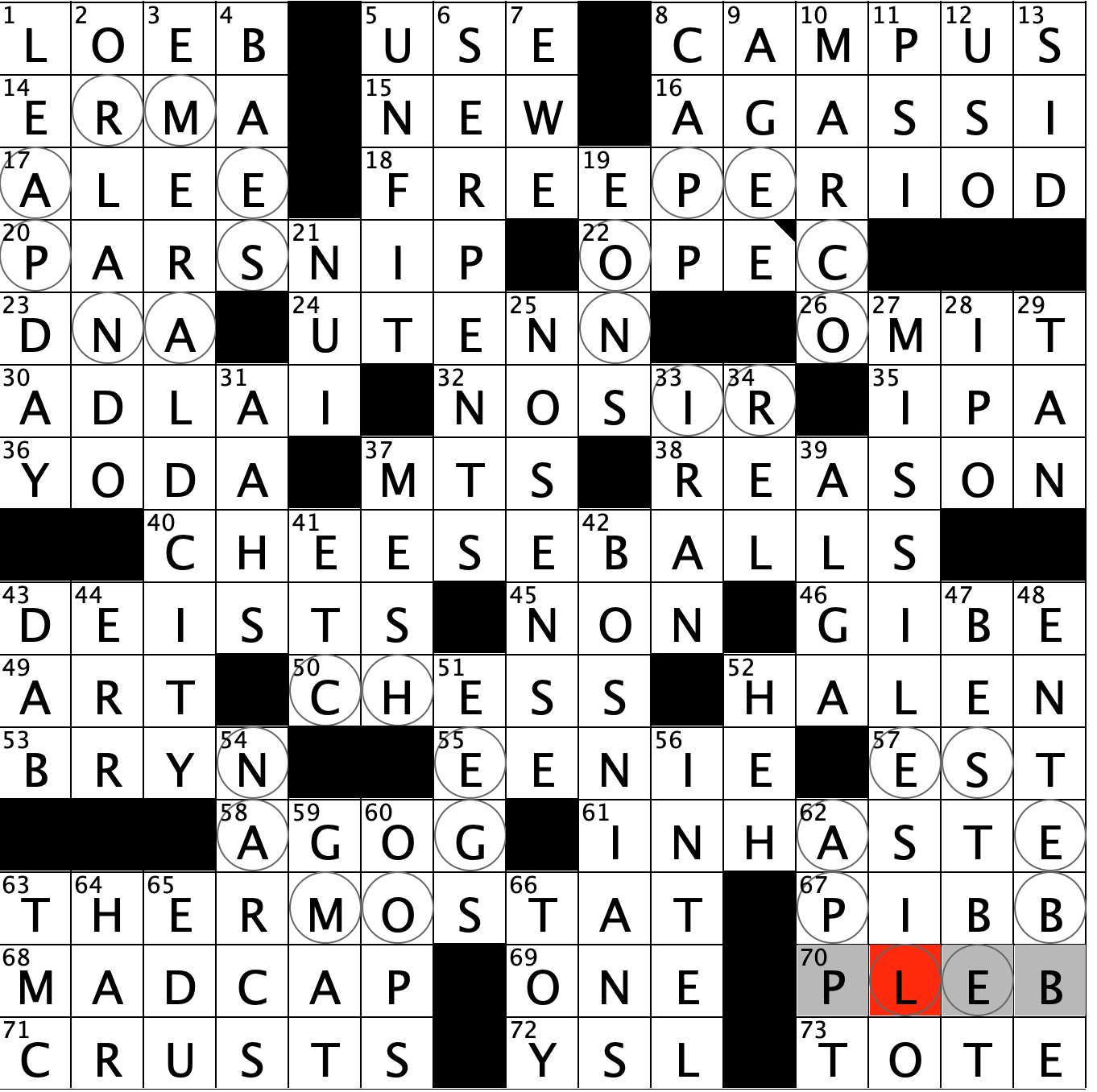 I really like the idea for this puzzle, but am less sold on it’s execution here. This puzzle would’ve been a lot better if all solvers could see the circles – but so much of the theme needs those circles that it’s unfortunate that so many won’t get it’s full effect. I was also completely unfamiliar with BEL PAESE so I struggled for a bit with that southeast corner – which felt so much harder than the rest of the puzzle.

Without the circles, this does make a decent themeless, with beautiful answers like EMERALD CITY, FREE PERIOD, BEST BET, LEAP DAY, and MADCAP scattered throughout the grid.

NUI crossing ADLAI was another sticking point for me, with the I being a guess I made after running the entire alphabet in my head.