The theme today is a list of common phrases featuring a body part and an action that sounds unpleasant if it were done literally. Despite the title, these phrases are clued straight (that is, as the phrases are normally used) not as part of some sort of crosswordian torture chamber. 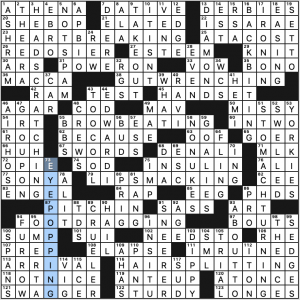 This is a pretty good and lively list, but “dragging” and “scratching” don’t quite fit in my mind as they aren’t as unpleasant as the rest. There are a great many of these types of phrases (I know, because I made my own list once) so there are plenty of alternatives to choose from, such as KNEE SLAPPING, SPINE TINGLING, TONGUE TWISTING, HEAD BANGING, ARM TWISTING, JAW DROPPING, etc. etc.

And cluing these straight is perfectly fine, but it feels like a missed opportunity to do something more imaginative and fun, like the aforementioned crossworder’s torture chamber. However, I expect an imaginative clue for something like EYE POPPING—while I love it—might not pass the breakfast test.

In the end, we’re left with a nice themeset, although I wanted something more from it.

Anyone else have trouble with that NW corner? I was slowed down trying to parse RED OSIER which has an unpleasant crossing with EBRO. ASHRAM, THE ERA (also tough to parse) and 80’s song SHE BOP added to the challenge especially when you throw in ARS, MACCA, and AP BIO. This is what happens sometimes when you cross themers, and we can probably blame those Hs at the start of HEART and HEAD for constraining the fill. The SE fares better, but we still have RHE, IT ON, and LONG ES to contend with.

Elsewhere the fill is stronger with the likes of POWER ON, TAKEOUT, GROUPON, YORKIES, NO NUKES, GOALIES, TOO COOL, PITCH IN, DENALI, INSULIN, DIAMOND, and a desperate “I’M RUINED!” HANDSET is good, too, but it probably shouldn’t be there given the theme.

And there are still plenty of gluey bits, and not all of it short: GOER, SNEERER, NEEDS TO, ABOUT TO, OMERTA, AGAR, IRT, RGS, etc.. And given all the gerunds in the theme, I could’ve done without ING even if it is clued as the financial company. And VIG [Bookie’s charge] is not a word I’ve ever heard before.

This puzzle came straight down the middle for me. Some good stuff, some not as good stuff. The themeset is lively, but I wanted more liveliness in the clues. 3.5 stars. 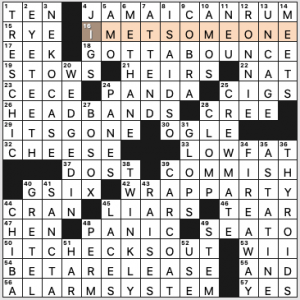 Aaaah! I was enticed by the double byline, two all-star constructors, and they did not disappoint. The puzzle kinda kicked my butt, took me quite a bit longer than the typical Saturday NYT, but I enjoyed every minute of it. Sometimes a hard puzzle annoys me with things that feel too arcane or oblique, but this challenge was fun.

First up, the highlights: JAMAICAN RUM. “I MET SOMEONE” (they’d better be worthy of you). “GOTTA BOUNCE” with an extra layer in the clue, [How a security guard might say goodbye?]—bouncers are basically security guards. HEADBANDS, a largely female-associated term, with a tricky clue, [Do loops?] (give me more HEADBANDS and fewer TTOPs). A sports (or trivia!) league COMMISH. A theatrical cast’s WRAP PARTY with a misleadingly orthopedic clue, [Setting for a plastered cast?]. “IT CHECKS OUT.” “TRES CHIC.” WEDGED IN. [Really hit one’s stride?] as the clue for CLOMP. “FIRE AWAY.” TWINKLY. OGLE clued via [Exhibit a male gaze, perhaps]. Sports trivia that may come in handy some day: [Mascot of the W.N.B.A.’s Mystics, e.g.], PANDA (recall that Erik wore an Elena Delle Donne Mystics jersey for his ACPT championship). So much twinkly fill, so many tricksy clues. Love it!

Check this out: the grid’s got one abbrev (SEATO) and no partials (unless you count I SAID SO as a “because” follower, which, really, we should because I SAID SO on its own isn’t really a thing). A smattering of foreign vocab, nothing out of place in a Saturday grid. And the difficulty arises from the twists in the clues more than from hard vocab or obscure trivia. Let’s call this a good 4.75 stars. 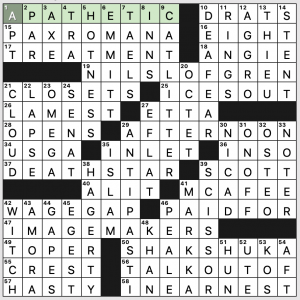 I remember solving Stella’s puzzles from many years ago, and I know I am not alone in saying I enjoy having more of her puzzles appearing once again. This one didn’t play too difficult from a clueing standpoint, but there is an entry or two (or three!) that the solver may not be familiar with, but in most cases the crossing entries gave a lot of help. A couple of such entries, in my opinion, do actually cross each other, but the options for what the correct answer is somewhat obvious. (I’ll explain below!) All in all, a good themeless that, if I had my preference, would be clued just a tad tougher! 4.4 stars for this one. 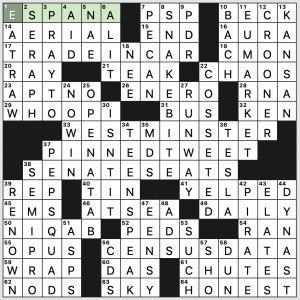 Sorry this is late; it’s been a day!

This one Stumped me. Well over 20 minutes for me. Some of these answers just weren’t coming at all. I found the entire left half of the puzzle extremely difficult, with maybe a slight nod to the SW corner as being the absolute worst. Here’s hoping next week’s puzzle is a tad easier. I feel bruised after this one.But it’s the weekend, so I have time to recover! 4.3 stars for this toughie.