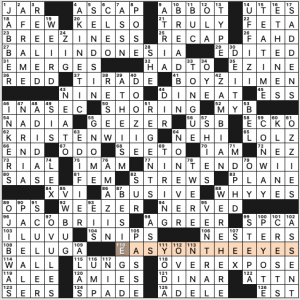 Sorry the post is late—we went down to Little Village to celebrate my son’s girlfriend’s birthday at El Milagro. I tell ya, I wish more Mexican restaurants served tacos with rice, beans, and a vinegary cabbage slaw on ’em, with milanesa de pollo as an option. I first went to El Milagro when I had jury duty at the Criminal Court building—Chicagoans, don’t try to dodge jury duty at 26th and Cal, because you can get a great lunch down the street.

When I hit the second long answer in the puzzle with two successive I’s, I thought I’d figured out the theme. But when I reached the revealer, I discovered I’d missed a layer: 110a. Good-looking … or a phonetic hint to a feature found five times in this puzzle], EASY ON THE EYES. Each instance of II has the letter combo EZ sitting on top, “EZ on the II.” That parsing of the phrase had never occurred to me, so the theme brought a little surprise.

The theme pairs are found in BREEZINESS atop BALI, INDONESIA; EZINE atop BOYZ II MEN; GEEZER atop KRISTEN WIIG; NEZ atop NINTENDO WII; and WEEZER atop JACOB RIIS. I enjoyed the pop culture content in half of these thematic entries.

Moving along to the “five more things” space:

Entries I wasn’t keen on include the ERs (AGREER, NESTERS, EDIFIER, SCULLER, INKERS), NINE TO, ODO-, rarely seen AKINETIC, and STEP A. BREAD BIN was new to me, too—I had BREADBOX first. Better: UFFIZI, ATHEISM, JABBER.

This is a cute-ish theme that would have been better in a daily-sized puzzle with an egregious dupe and some seriously marginal fill. On balance, not a great puzzle.

Every theme answer includes a place to sit, and right above that part of the answer are the letters CAT. 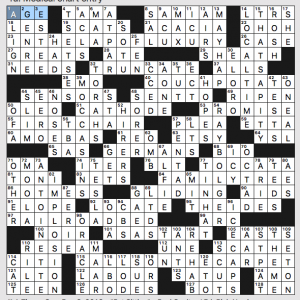 And a revealer: 114d [One of six hidden in this puzzle, each sitting on an apt location] is (say it all together now) CAT.

It’s kind of cute, and I would have enjoyed it more with three cats instead of six. This is one of those themes that is an impressive feat of construction but not so much fun to solve. And it got a lot less fun when I ran into 24d [Ate] right next to 28a [Put away], which is ATE. The answer to 24a is HAD. I can think of three other clues for HAD off the top of my head, and I’m neither a constructor or an editor. There’s no reason for that.

There are a lot of three-letter words in this grid, so we get OF A, TBA, ACU close to ICU, REO, AES, crosswordese ODA, OMB, EMO, and ETO, among others. Too much. Waaay too much.

What I didn’t know before I did this puzzle: that Shaquille O’NEAL was the NBA Rooie of the Year in the ’92-’93 season.

Constant Solvers are likely delighted to see WaPo’s unofficial mascot make his return, this time in the medical field. I’m wondering if other solvers, like me, have a visual in their head as what Captain Obvious looks like. For some reason, I can’t help but picture Captain Underpants, but that can’t be it! Maybe Evan should hold an illustration contest. 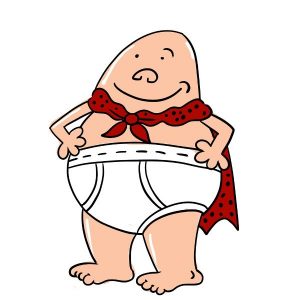 This can’t be what he looks like! Someone come to the rescue and draw Captain Obvious!

A playful, charming puzzle, as one can expect from the occasional Captain Obvious appearance. It’s best not to overthink these and just have fun with them. Like the word SHOT in SHOT IN THE DARK changes meaning from the base phrase and GO UNDER THE KNIFE already has a medical connotation before Captain Obvious gets to it, but the blatantly literal analysis by the newly anointed doctor is pretty funny. I just started watching the Netflix series “Atypical,” and this feels like the sort of puzzle Sam would appreciate.

Fill was fairly straightforward today. No real hiccups and I was able to move steadily from north to south, occasionally getting hung up on unfamiliar names like LUE, TYCHO, and ARMIN. For those, I needed all the crosses and still triple checked to make sure that I couldn’t have possibly had any typos. That said, crosses were more than fair.

Already looking forward to the next time we see the Captain!