This played a smidgen harder than an average Monday for me, in part because I have never watched “The Office.” The theme answers are all place + color. If there’s a specific pattern or meaning to the colors, I missed it. 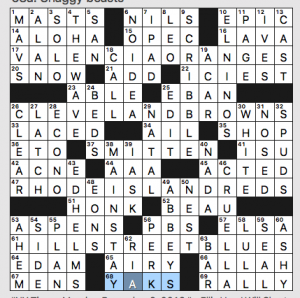 Four 15-letter theme answers that are all solidly in the language and consistent, and appropriate for a Monday. Impressive.

What I didn’t know before I did this puzzle: in addition the Ed and the source of the oranges, I didn’t know that ISU sports teams are the Cyclones.

This looks to be Sid Sivakumar’s WSJ debut. Congrats! Sid had a nifty AVCX grid a couple months ago if you’ll recall.

Today we’re given theme entries in the Down direction, each with some circled letters at the top. 30d is clued [Partly, and a hint to how to read the circled letters]. Answer: UP TO A POINT. 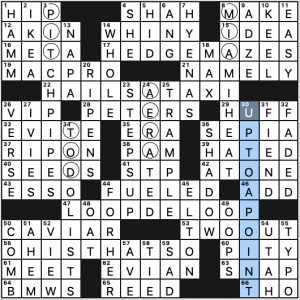 It took me a while to realize these were all synonyms of “point” where the meaning of “point” changes from entry to entry. Nice. I like it. But it feels pretty esoteric for a Monday. For me anyway.

Beautiful fill though, eh? NAMELY, we get HEDGE MAZES, HAILS A TAXI, “OH IS THAT SO?,” LOOP DE LOOP, CAVIAR, STEPS UP near to TRAMPLE, SHADOW, MAC PRO, TWO OUT, HYENAS, and Bernadette PETERS. That’s pretty great stuff for a Monday when a constructor has less leeway in filling out the grid. Oh, I also liked FOR HER clued as [Gift category]. That was a nice touch.

Being a Monday, cluing is pretty straightforward but I can relate to [Pain in the neck, at times?] as the clue for TIE.

Nice theme, even though it eluded me for too long, and delightful fill. A well-crafted grid. Four stars.

I leave you with my favorite Bernadette PETERS moment: her duet with Steve Martin in The Jerk.

If I hadn’t known today’s puzzle was by Natan before solving, I’d have figured it out by the time I hit the center of the grid, where REFUGEE CAMP occupies the central squares. The viewpoint that Natan brings to his puzzles is always strong and often highlights his work in refugee and immigration advocacy. It’s awesome. 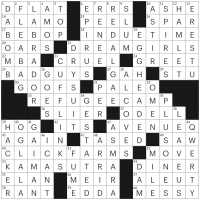 I (as usual) loved this puzzle, although I have a couple of nitpicky minor things that keep it from being my absolute favorite. First, the good stuff.

Anyways, overall, still loved it. My favorite thing about these New Yorker puzzles is that they really allow the constructor’s voice to shine through, and Natan’s puzzle voice is one of my favorites. Lots of stars from me.

I finally got caught up on the Peloton commercial controversy- literally just before opening the puzzle- having been in the dark most of the week. So 1-Across was no problem whatsoever for me! You can always count on BEQ for uber-current entries.

I was shocked at how easy the SE was- not needing a single cross for the lovely stack down there (MADAM I’M ADAM, AMAZON PRIME, SPRINGSTEEN). That’s a rarity for me.

And in case you haven’t seen the follow up ad: 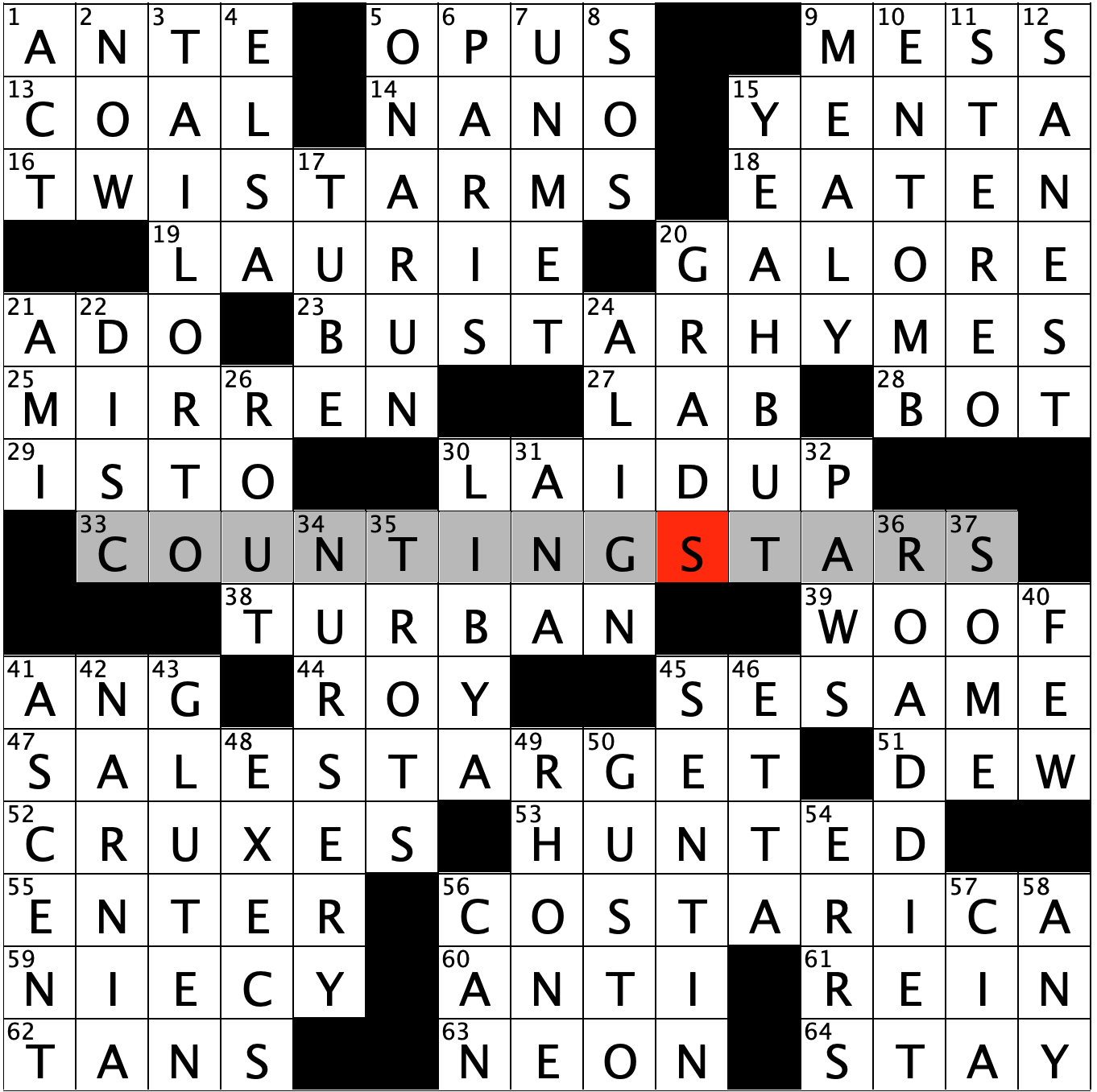 Cute puzzle to start off the week. I liked the theme – and thought this set of answers was a lot of fun with a really nice range. The only one that I didn’t love was TWIST ARMS which is valid, but just felt like not the part of speech that is normally used here.

Some fun fill here as well – I was unfamiliar with ROAD DIET before but it’s a great entry – and I like seeing NARNIA show up – especially this time of year. Also going to give points here for MIRREN, ON A RUN, YEAH BUT, and TAILOR TO.

For those unfamiliar with the song this puzzle is based on: 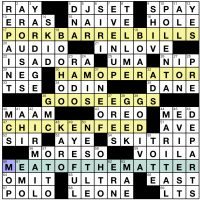 Each of the themers starts with a type of meat, but I’m not sure what the “matter” part of the revealer is supposed to indicate. It feels like this puzzle could have had any meat-related revealer to me, which makes it seem less elegant. Also, HAM OPERATOR uses the term ham in a completely different way than the meat meaning, while the other themers’ meats reference the meat/animal itself. Finally, pork and ham are the same meat, right? Two pigs and two birds, but no other animals/meats. Was this puzzle supposed to be focused on white (or the other white) meats? It’s all okay, but it didn’t feel as solid and enjoyable as some other puzzles I’ve done in the LAT lately.

The fill in the puzzle was largely straightforward and uneventful, aside from the odd ONE OF [___ a kind] and HOLE [___-in-one: golfer’s ace] dupe. ERES [“___ to you, matey!”] also felt a bit dodgy. Otherwise, a quick solve! It was nice to see women like ISADORA Duncan, UMA Thurman, and Lady GODIVA in the puzzle. Yes, MA’AM!