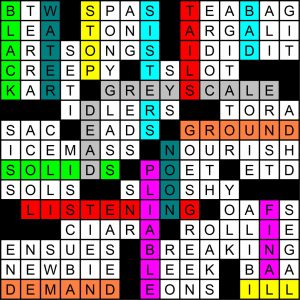 Title: “How Contrary!”
Prompt: The meta for this puzzle is a famous band.
Answer: Coldplay

Final Muller Meta of the year…or we get one more, right? I always get that mixed up. Someone enlighten me in comments, please!

Spent about a half-hour on my first pass at this one, with no success. Then tonight I sat down with it and managed to figure everything out, and it’s a nice one.

First insight, very easy: there are sixteen clues that end with parenthetical numbers. Insight 1b: these sixteen numbers consist of eight pairs, the numbers 1-8 inclusive. Insight 1c: they’re not all both down or both across or one of each, so acrossness or downness within the pairs appears not to matter.

I circled all these sixteen in the grid and guessed (correctly, as it turned out later) that there was no other relevant info in the grid besides these sixteen, because a) that’s a lot and b) this looked like about what a top constructor would come up with if they had to fit these sixteen entries into a 15×15: the SISTERS/GREYSCALE/TAILS configuration is efficient and knocks out 3 of your 16 pretty quickly.

So assumed we were working with just these 16, the arranged them by numbered pairs, in clue order (all acrosses, then all downs):

Played some word association games, trying to see if any synapses in my brain fired as my eyes scanned these words. Nothing happened, but then I remembered: look at the title! How often these sage words of advice can get a stuck meta-solver unstuck…

“How Contrary!” suggests opposition, I thought and then…

Second insight, this meta’s nice core element: Take an antonym (or some kind of obvious near-opposite) of each half of these word pairs and you can form the name of a well-known band. SOLIDS / BLACK is what did it for me — Stripes from pool and white yields the White Stripes. The full list is:

The White Stripes. Order of the two words is not given (or at least not that I could see); you just have to suss it out.

Air Supply (supply and demand is the second one)

IRON MAIDEN. Tough one, for me at least. I had 7 of the 8 extracted letters so was able to submit my entry with confidence, but had to e-mail the author to tell me this one, even though I knew one of the words had to start with I. “Iron” as in “unyielding” and “maiden” as in a ship’s “maiden voyage.” I spent 4-5 minutes trying to find a band whose first word was “Initial.” Trust me, there isn’t one.

LIVING COLOUR. Notice what a clever touch it was to use the British spelling “greyscale” here, since the band’s name is “Living Colour” and they’re British. Well done.

Third insight: Line up all those bands and the first letters spell WARM TOIL:

Perform the meta trick one last time on Warm/Toil and you get Cold/play, who indeed qualify as a well-known band.

I thought this was an outstanding meta. Clever main mechanism that took me quite some time to see, but then was so obvious in retrospect. And a bunch of nice touches along the way, such as the final eight extracted letters not yielding the answer itself but rather forcing the solver to jump over one more elegant hurdle. 4.60 stars.