This week, we’re looking for a cartoon duo. Gathered together from the cosmic reaches of the universe, here in this Great Hall of Justice, are the most powerful forces of good ever assembled…. 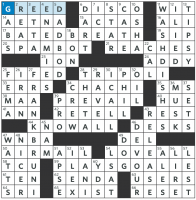 At first glance, after solving the grid — not much stands out. But there are five clues with interesting stuff in them:

First thing I noticed: The entries with the “(d)” clues correspond to pairs of verbs in the past and present tense:

Meanwhile, back at the Hall of Justice …. l Solving a meta is best done with friends — and my friends are … super. So I sent out for a lifeline to super solving friend Jeremy K., who used Twitter DMs to suggest that I take another look at the four longest entries. And, as it turned out, the past tense verbs in the pairs are contained within them:

… but not all of them. WIN/WON is not. Could that pair be the key to our cartoon duo? Did it ring a bell? It did not. Think late 70s/early 80s, Saturday mornings, Hanna-Barbera, Jeremy suggested. Could Laura use her memory of the junk culture of her wasted GenX youth to solve the meta? 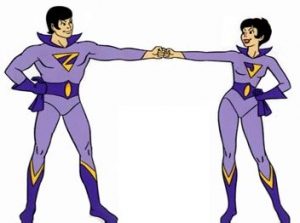 The Wonder Twins, Zan and Jayna

Our cartoon duo is the WONDER TWINS, Zan and Jayna. Technically, they’re a trio, with their space dog, Gleek, but who’s counting? Zan, Jayna, and Gleek debuted on The All-New Super Friends Hour in 1977. By touching their fists together and shouting “Wonder Twins, activate!” Zan and Jayna could transform themselves into, and bear with me on the logic of this, some form of water and any animal, respectively. So Zan would say “Form of … an ice helicopter!” and he would become, like, an ice helicopter, and Jayna would say, “Shape of … an octopus!” and she’d become, natch, an octopus. Gleek didn’t necessarily have powers, but he did have a prehensile tail, and he would carry Zan — in the form of … water — in a bucket, while Jayna, in the shape of … a giant eagle, would fly them places to help the older Super Friends fight the Legion of Doom.

Minutes later, in the group DM, Jesse confirmed our answer. Not everyone was satisfied with the answer, though. solving friend Austin told Jesse he’d had quite enough of our 70s nostalgia: 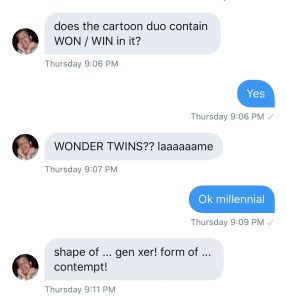 I suspect this meta will have a similar polarizing effect on solvers; for every Mister Mxyztplk who enjoys it, there will be an equal and opposite Klptzyxm. I was only a little disappointed, though, that the cartoon duo was not Worker and Parasite.