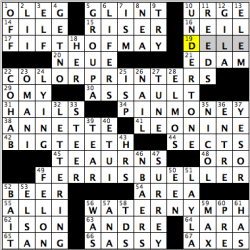 Hello there, everybody! Hope all is well as we continue to wind down the days left in 2019!

Today’s puzzle includes six wonderful theme entries, all of them starting with a word that also can precede the word “wheel.” Let’s give the wheel a spin and look at all of these entries, shall we?

When I filled in NEUE, I thought to myself that that was also the name of a country, but then realized I was confusing it with Niue (20A: [Modern, in Bonn]).  Here is hoping you have come across our constructor’s calligraphy skills on the Crossword Nation site, so seeing LETTERING was awesome as somewhat of a nod to one of Liz’s many talents (32D: [Calligrapher’s activity]). It’s paralleling entry in the grid, UNDERTONE, was probably my favorite fill of the day (10D: [Subtle quality]). Anyone on here ever use COHAB in conversation before (22D: [Roommate, slangily])? I know I have not, outside of inputting it in a crossword, but maybe you might have used it in conversation before and I’m curious about that.

“Sports will make you smarter” moment of the day: NICOL (35D: [“Excalibur” actor Williamson)]) – The English soccer club Liverpool FC is currently undefeated in its current Premier League season, and that development might remind many diehard fans of great Liverpool teams of the 1980s — ones that featured one of the best defenders of the time, Steve NICOL. Between 1981 and 1994, Nicol played 343 games for the Reds, helping the club to five league titles, three FA Cup titles and the Champions League title (called the European Cup) in 1984. Nicol eventually applied his soccer acumen across the pond as the head coach of the New England Revolution of Major League Soccer, ending up as the longest-tenured head coach of one team in MLS history (2002-2011).

It’s time for another Tuesday WSJ. Let’s dive in and see if we can get “The Big Picture”: 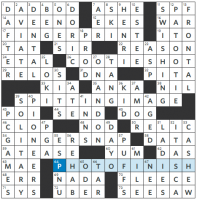 The second half of each theme entry is a synonym for photo: print, shot, image, and snap. Nice! I appreciate that most of the themers used the photo word in an alternate use that didn’t involve a likeness at all, and I wish that SPITTING IMAGE had done the same. Otherwise, this feels like a solid theme set and fun revealer.

What I really liked about the puzzle was how fresh it felt. Not only are all the themers fun (especially COOTIE SHOT), but much of the puzzle’s fill was also vibrant and interesting, including: DADBOD, SWISHING, PATOOTIE (to match nicely with cootie!), PC GAMES (especially as clued as [Some Steam downloads]), and Amy Winehouse’s REHAB. I also appreciated the women included in the grid, like Jennifer Aniston for AVEENO, ITO Midori, MAE West, LADIES, and the late Amy Winehouse. Finally, I really liked the paired clues like [Denver elevation] for MILE paired with [Elevated verse] for ODE and also [Bit of crime scene evidence] for both FINGERPRINT and DNA. I appreciated the fun callbacks. All in all, a fun puzzle! 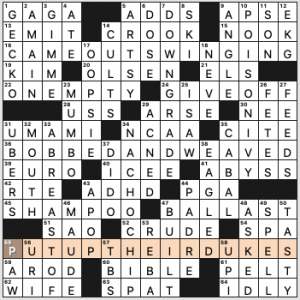 The theme takes three pugnacious, pugilistic phrases and clues them as if specific sorts of people at a brawl were doing those things literally:

Abbrevs felt rather plentiful in this 76-worder. USS NCAA RTE ADHD PGA EKG TBS UPI? Now I’ve got a hankering for a bowl of Alpha-Bits cereal.

3.25 stars from me. I liked the theme, but hoped for more smoothness in the fill. 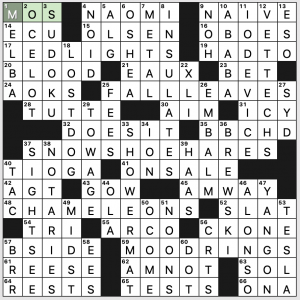 Since Matt has to come up with a puzzle weekly (and has done so for YEARS), I often think about how the brainstorming process goes. With this puzzle, it seems quite clear that this time of year has to have had at least a small role in the inspiration of this puzzle, and the idea was pulled off well. Here are the thematic entries:

Very nicely done! Do you see what I mean in how this puzzle was likely inspired? Also, that fun face about the snowshoe hare was interesting; I may or may not have heard that before, but still a fun fact. More info found here. The result is another fun Jonesin’ puzzle. 4.6 stars.

I will stop there! Another Jonesin’ coming next week. Still closing in on puzzle #1000! 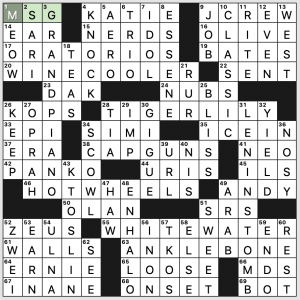 You may have to think a bit about this theme even after it is done. Here are those theme answers:

Is the revealer clear enough? All of the themers first words can follow the word white (white wine, white tiger, etc.), and all of the second words can follow water (water cooler, water lily, etc.). Maybe a little complicated, but still a rather neat theme idea. Or maybe I am just a little slow with this one. Often when you solve quickly you have to go back and examine what the theme is, and this certainly merited a little scrutiny upon completion. But all in all, a nice Tuesday puzzle. 4.2 stars today.

THEME: Common food phrases reimagined as if they’re a mission

Three of the five of these work really well. One feels a bit off. And one feels just plain wrong. The latter is CURE PASTRAMI. That’s definitely not a stand alone phrase that I’m familiar with. And Googling it in quotes yields a mere 482 hits. CURE(D) PASTRAMI does a bit better at over 20,000 hits. FIX SOME EGGS, FREE BREADSTICKS, and NURSE A DRINK, on the other hand, all make sense as stand-alones. DELIVER PIZZA feels weird too. I think PIZZA DELIVERY sounds more in-language.

Fill is fine here… no major stumbling blocks… though in my English class I try to dispel the myth that a HAIKU must be 17 syllables.

I mostly liked this, but those two rather forced entries left a bad taste.