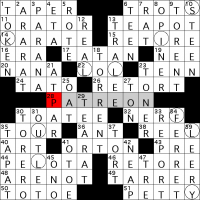 hello and welcome to episode #601 of matt gaffney’s weekly crossword contest, “Going Off-Site”. i solved this one without the instructions, as i often do on week 1 puzzles. the only theme answer in evidence in this 13×13 puzzle was the central across: {Website I’ll be using for MGWCC distribution and subscriptions as of January 2020 (page goes live later this month; full details next week)} PATREON.

interesting news, and that explains the title, as well as, perhaps, dave sullivan’s retirement as mgwcc webmaster (an occasion we observed with a guest puzzle a few weeks back). so what’s the meta answer? it turns out that almost all of the entries in the grid are made up of just the letters of PATREON. i’ve circled the exceptions in my screenshot; read in order from top to bottom, they spell out SKILLFULLY, which seems like it must be the meta answer. indeed, the instructions say that the answer is how MGWCC solvers handle metas.

i think SKILLFULLY is a pretty cool answer, and one of the longest apt words that doesn’t use any of the letters in PATREON, which includes six of the nine or so most frequently occurring letters in english among its seven letters. as is often the case with these reduced-alphabet themes, some of the fill matt had to resort to was not very good; examples include the unusual partial EAT AN, the unfamiliar brand-name fragment TATO, unusual -er formations TARRER and OPINER, and the duplicate pair of TEAR AT/RETORE. but that basically comes with the territory with this kind of theme, which is not easy to construct. i think it was a good decision by matt to scale down to 13×13, as seeing only the same few letters over and over grows tiresome quite quickly.

that’s all i’ve got this week. i’m certainly interested in hearing more about the move to patreon!