Nothing too DEEP or tricky in this theme, just a little bit of repetition. 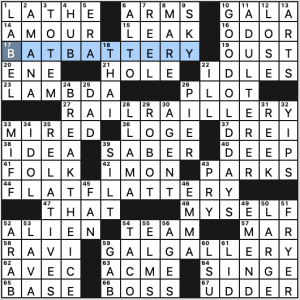 Good consistency in the theme in that none of the short words are etymologically related to the longer words (as far as I can tell). However, the repetition makes me feel this would have been better suited as an earlier-in-the-week puzzle.  But still, I don’t mind it.

The long fill is quite nice with ADULTERER, GOOD OLD DAYS (I wanted GOOD OL DAYS), and BREAK THE ICE. There’s almost nothing to complain about in the fill either (except maybe EMEND and YIPS). My biggest trouble came when I misread the clue [Number of vowels in “Deutschland”] as [Number of syllables in “Deutschland”] and wrote in ZWEI instead of DREI.

Cluing is pretty straight, but [Setting of the sun] for SKY is worth noting.

All in all, a light theme, but it’s executed consistently, and the grid is clean and sports shiny long fill. 3.7 stars. 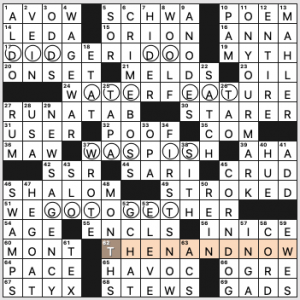 The theme revealer is 62a. [Phrase in an article on grown-up child stars, perhaps … or a hint to this puzzle’s circled squares], THEN AND NOW. The four themers are words or phrases that contain circled words that are past and present tenses of some basic verbs:

In the fill, FIRST SNOW angered me because Chicago, ridiculously, got way more than a dusting on Halloween, which is in October, people. So we’re 6 weeks into winter here, and it’s technically still fall. *sob* 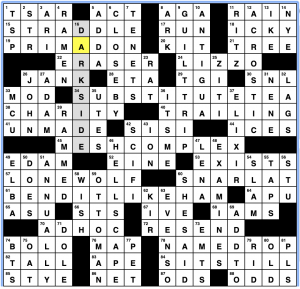 Happy Wednesday, all!  We’ve made it to the middle of the week, Friday is in site, and today’s AVCX puzzle by Aimee Lucido is pretty fun.  And it’s 17×17, so there’s extra fun to be had with the theme:

The revealer is a good hint to what’s going on with the parentheticals in each of the theme clues – a celebrity’s name has been dropped from each of the goofy phrases provided by those clues, and restoring it makes them common phrases.  PRIMADONNAS, SUBSTITUTE TEACHER, MESSIAH COMPLEX, and BEND IT LIKE BECKHAM.  All of them being musicians (as suggested by the clue) is an extra level of tidiness here, though there tend to be more mononymous singers than other entertainers.

If you’re not watching The Masked Singer, you are missing out on what is certainly television. 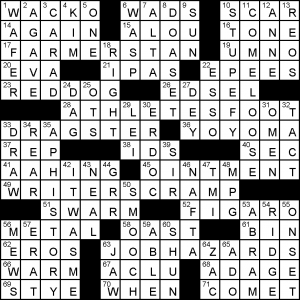 JOBHAZARDS is a dry technical revealer, but aptly describes what the theme is about: >JOB<‘s >MALADY<, 3 of them. FARMERSTAN may or may not be strictly a malady, but it is a colourful phrase. ATHLETESFOOT is a term for any ringworm species found on the foot. WRITERSCRAMP is self-explanatory.

Not a fan of several short kind of contrived phrases: CARAD, DOASET, UMNO, ERDOC. One might not attract too much attention, but four…