64a PUT ON AN ACT is clued [Pretend, and what you’ll find five times in this puzzle]. Sure enough, we find the letters PUT sitting above the letters ACT in five locations in the grid. 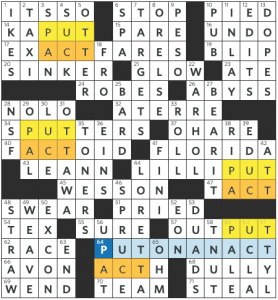 Most of these were fun; I especially liked KAPUT, SPUTTERS, FACTOID, and LILLIPUT. But EXACT FARES [Bus-riding requirements, often] sounds wrong in the plural, and ACTH is…well, what the heck is ACTH? It’s clued [Pituitary hormone, for short] and is apparently short for Adrenocorticotropic (or adrenocorticotrophic) hormone. Yeah, no. Not crossword fodder at all, in my opinion, though it’s appeared 21 other times according to the cruciverb database, sadly. Ugh. (Constructors, kindly remove that from your databases.) And crossing it with UP AT [Maugham’s “___ the Villa”] makes for a pile-up of unsightliness in that section. 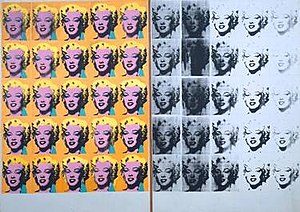 The “Marilyn Diptych” by Andy WARHOL

Other downers include DUADS [Pairs], ATERRE [Touching the floor, in ballet], starting the grid with awkward “IT’S SO,” and the mention of Betsy DeVos in the clue for EDUC. There’s also a six-letter partial in BEAR IT if you keep track of that sort of thing.

Trying to counter those, we find WARHOL, “OR ELSE!,” SINKER, OTTAWA, FLORIDA, LORETTA Young, and SPRUCE. Nice, but nothing longer than a 7, no doubt due to the constraints posed by the theme entries.

I don’t know if it would have been possible, but I’m wondering if this grid could be restructured in such a way to get rid of the crummier bits (especially ACTH) and allow for some flashier fill. The NE and SW corners aren’t being utilized at all, so I have to think there’s some potential there.

For the most part, I like the theme, but I think this one needed a bit of re-working to iron out the kinks. 3.1 stars. 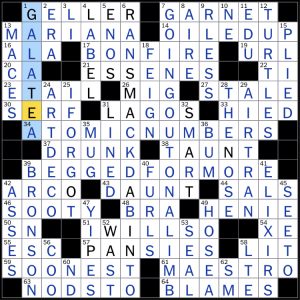 I respect this theme as a construction exercise, but this feels like the sort of theme that may be more fun to put together than it is to solve.  Ultimately, I felt like I was doing a worksheet in chemistry class, albeit a well-constructed one.  If your mental periodic table is a little rusty, you’re going to need a lot of help from the crossings here.

Some other notes on the grid:

This one had me at I’M ON A BOAT. I mean, great theme too… but that entry *almost* stole the show.

THEME: Foods that are tiny! 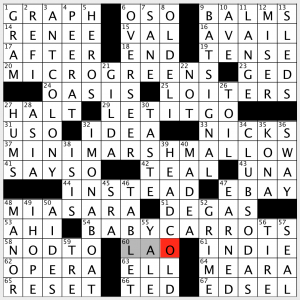 This is what I like in a Universal puzzle. Three solid theme entries, and great fill. This was totally enjoyable. Yeah, sure, the plural is missing on MINI MARSHMALLOW (it would be weird to see just one topping your hot cocoa!), but who cares? At 74 words, the grid has space to breathe and allow for fantastic entries such as the aforementioned I’M ON A BOAT, ANT COLONY, BAT SIGNAL, HEAD COLD, MIA SARA (I admittedly don’t know anything she’s done other than Ferris… but it was a fun enough name to infer), LET IT GO (thankfully clued sans Frozen reference), and CLUB SODAS (grumble, grumble over the plural here, which is just as weird as excluding the plural from the lone MINI MARSHMALLOW).

Love the consistency in the theme and the tiny 15×15 platter it was served on. Thanks, Emily!

I’d be remiss if I didn’t embed the NSFW video “I’m on a Boat.” If you’re offended, just check out some of Lonely Island’s other hits. Highly suggest the Michael Bolton one. But it has over 203 million views… so I hope it’s not new for you! 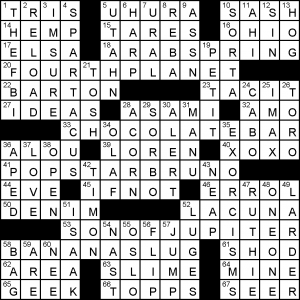 Blogging before our power is cut for “loadshedding”. At least it’s only two hours today. We’ve had nearly eight in recent times.

So often these definition themes fall short. Today’s subject is [Mars]. The POPSTARBRUNO is named for the FOURTHPLANET. Said planet is named for the SONOFJUPITER. So really that’s just one Mars repeated thrice. The CHOCOLATEBAR is different, belonging to one Frank C. Mars.

BANANASLUG over SLIME was a very snazzy touch.