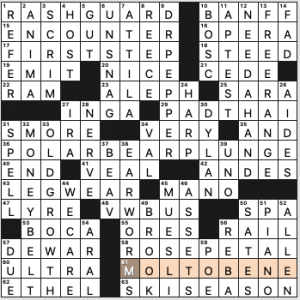 What a fun puzzle! This appears to be Ms. Rogers’ second published puzzle, her first solo—and it’s so polished. Among the answers I liked best were RASHGUARD, FIRST STEP, PAD THAI, the I-would-never-do-it POLAR BEAR PLUNGE (Chicago’s next one is January 25, mark your calendar), MOLTO BENE, seasonal SKI SEASON, OLD-GROWTH forests, EARWORMS (I am wildly prone to these), DR PEPPER, “NEED A HAND?”, and FREE RANGE.

The only thing that made me grumble was the Stumper-esque 22a. [___ home], RAM—since I wasn’t 100% sure that Jung’s thing was ANIMA and that the theater fabric is SCRIM, and that RAM clue felt rather oblique. As far as junk fill, well, there really wasn’t any. Which is always a nice treat.

The people in the puzzle are mostly women, in a 5/4 split: actress INGA Swenson, entrepreneur SARA Blakely, TV character ETHEL from I Love Lucy, athlete Gabrielle REECE, and country legend REBA McEntire go up against Bob DYLAN, the BEAV, ALFIE Allen, and Edgar Allan POE. You like to see it. There also aren’t a ton of names in the puzzle, which I know appeals to many solvers.

4.4 stars from me. Smooth puzzle with some interesting fill. 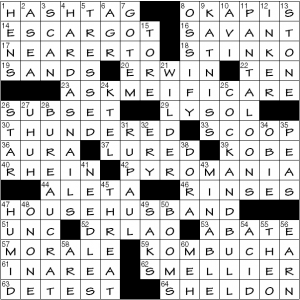 Ok wow, well, this puzzle took WAY longer than it should have. I’m going to blame the Nyquil fog I’m still coming out of (and the headcold it’s supposedly fighting for me), because the puzzle itself seems pretty great, now that I’m done with it! Although, actually, there were a few crosses that I think were unfair (I spent ~4 minutes hunting down an error). So I guess my verdict is actually that it’s a fun puzzle packed with great long and medium-length entries and a few ??? moments scattered about.

Those long across entries (ASK ME IF I CARE / HOUSE HUSBAND) are fabulous, but I haven’t seen Incredibles 2, and I stared at ___EIFICARE for far too long (again, blaming Nyquil), so they took some time to fill in. The long downs (COCK AND BULL / HARD AS NAILS / BUREAUCRAT / PANTALOONS) also took me too long, but again, I’m pretty sure that’s a me-problem and not a puzzle-problem. For all four of them, too, I had parts of the entires that just didn’t want to fill out (HARD-, PANT-, COCK-,B___RAT). (Looking at those partials together now, I’m wondering if maybe there was an x-rated meta going on here!).

My main error/maybe unfair cross came at GOT ‘EM/ERWIN. I had GOT ‘IM/IRWIN, which seemed totally plausible. Again, that may be a me-thing, but I doubt most solvers know Schroedinger’s first name, so with the ambiguous vowel in GOT ‘EM, I’d have preferred for that to be edited out.

Oh, the other entry I take issue with is MINABLE (With reachable ore). My brain just could not parse what “With reachable ore” could possibly mean. Like, is someone standing somewhere…with reachable ore in their hands? Even after I figured out the entry, I couldn’t make the two work together. I get it now, with some coffee and time, but “Containing reachable ore” would have been stronger, or just, maybe don’t use the word MINABLE?

Overall, this puzzle was stuffed with fun things that I was too brain-fogged to appreciate. Plenty of stars from me! 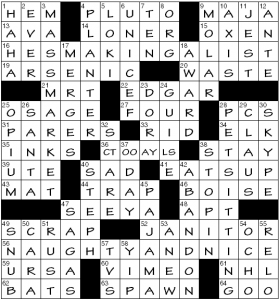 To accommodate the key phrases, the grid is pared to 14×15.

And sure enough, 36a is [Two possible stocking stuffers, covering the gamut of 56 Across]. How are we going to get two different things into the grid? A dilemma indeed. But thanks to 20aTNY [ ___ Schrödinger, deviser of a cat-based thought experiment] EDWIN, we can use his namesake formulation (as adapted for crosswords) to resolve that conundrum:

A quick swing around the rest of the grid:

nb: This is the only opportunity for the CHE to furnish a Christmas crossword, as it goes on break until 10 January, whereupon it will begin its final run of 8 puzzles before it’s retired.

THEME: ME has been removed from themers to create new, entertaining answers 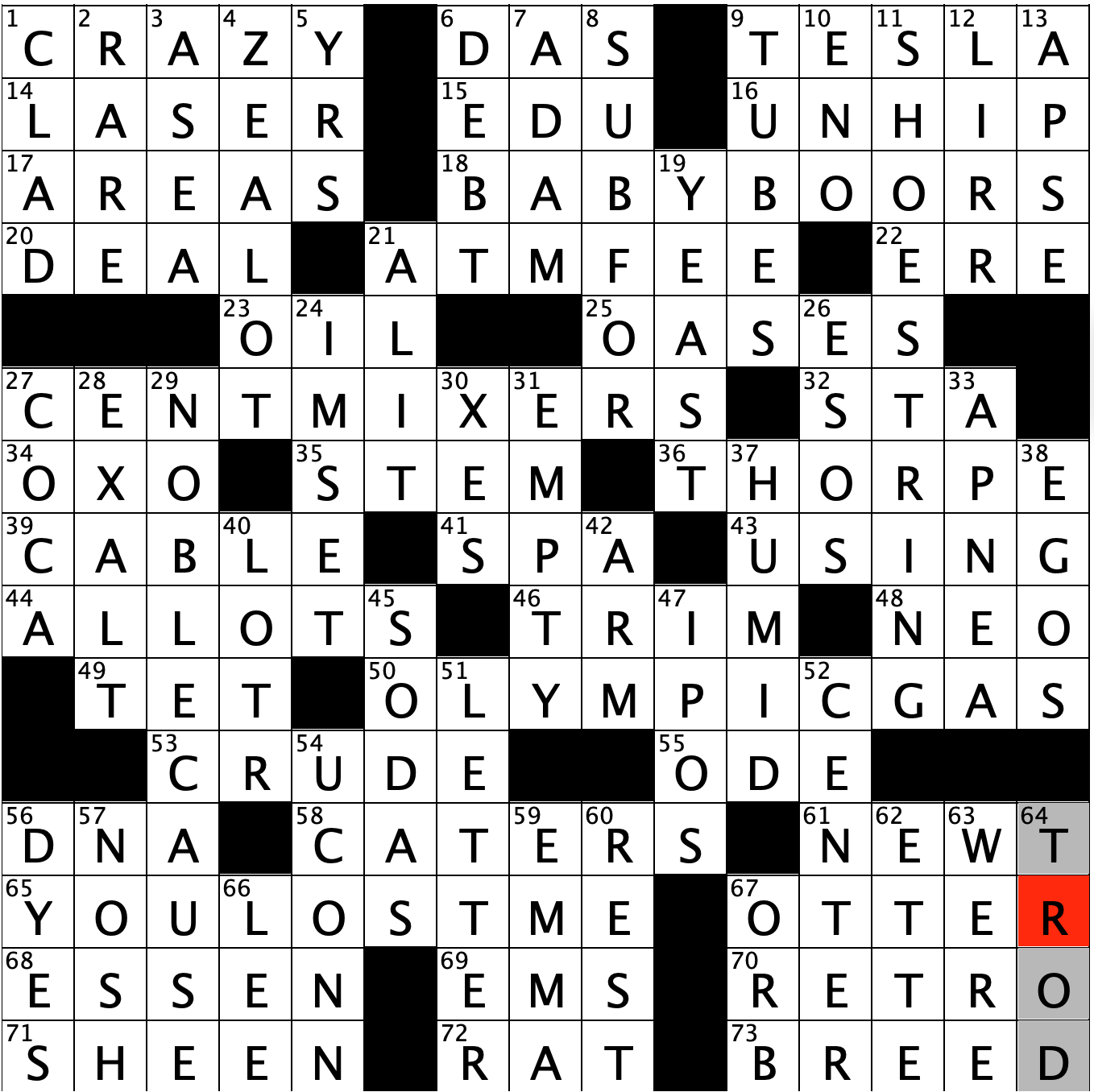 I loved this theme from the start with BABY BOOR such a great answer. All of the theme answers are great and the revealer is perfect. When I saw what was going on my first thoguht was something like “leave me out of it” but YOU LOST ME is fantastic here.

Really clean fill here too – I particularly liked SHOE STRING clued for potatoes over a budget and NOBLE CAUSE is a great long extra as well. The northwest and southeast are a little cut off, but both corners are really well constructed and fair so it didn’t bother me too much.

In honor of the title of this puzzle, here’s what comes to mind for me whenever I see the words “I’m Gone”

Very quickly, since Shabbat is upon us:

and the revealer: 60a [Do some holiday decorating … and what you need to do to four puzzle answers to produce familiar phrases?] is TRIM THE TREE. This is not entirely accurate. TRIM THE TREE would mean either reduce the name of the tree or add something to it. Each theme answer adds a letter to a word to create the name of a tree and thus make the wacky phrase. I liked the theme answers. The revealer ruined the theme for me.