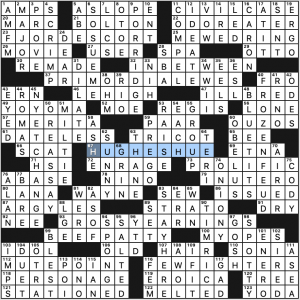 As you can see, my fears of a slog were unfounded. I liked nearly all of these entries which had good surface sense and a dash of humor here and there. A well-chosen themeset. Huzzah! 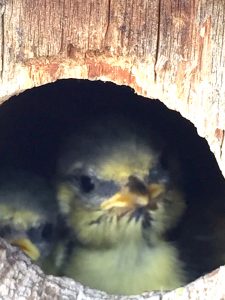 Blue tit chicks in my birdhouse

And the fill is praise-worthy, too. Highlights include CIVIL CASE, ODOR EATER, “SO SUE ME!,” PORRIDGE, IN BETWEEN, PROLIFIC, ARGYLES, BEEF PATTY, TIM RICE, “STAY HERE,” and BLUE TITS [Colorful Eurasian birds]. When I lived in England we had a family of BLUE TITS that would come and nest in our birdhouse every year.

ORE ASSAY [Miner’s evaluation] was the most challenging bit of fill for me but it made sense once I got most of the crossings. OBELUS [Printer’s dagger] is another one I hadn’t heard of. (It’s that cross-like symbol used to indicate a footnote.†) TRICOT [Underwear fabric] doesn’t exactly spring to mind either, but I must’ve seen it somewhere. HSI [Chu ___ (Chinese philosopher)] was a challenge as well, especially with that S crossing ORE ASSAY. (The name is also spelled Zhu Xi.) But it was the only thing that made sense. I wonder of Chu Hsi’s mother chose Jif.

A most enjoyable puzzle with an engaging theme. Some challenges in the fill, but the good far outweighs the bad. Four stars from me. 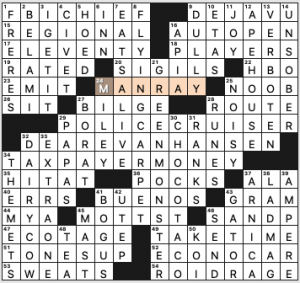 I had a hard time getting started in this puzzle, with the NW corner empty till I finished the whole rest of the puzzle. 1a is FBI CHIEF, though the job’s actual title is Director of the FBI. That crossed two French things—FRERES and BEL AMI—and it stopped me cold. Oof! 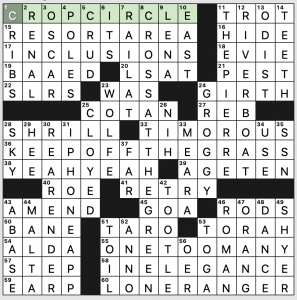 A little quicker this week! I updated my Black Ink software on my Mac, so maybe that is the reason! I’ve done a lot of Ed Sessa puzzles, and I don’t think I have ever met him in person. Perhaps someday! 4.4 stars today.

I must go take a nap now so I am ready for that jumbo NYT puzzle on Sunday! 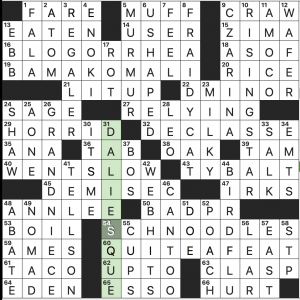 I struggled a bit with this one, but it wasn’t super hard. Actually, a time under 15 minutes is pretty good for me on a Stumper, and I did beat 15 minutes on this one. A couple of these answers made me smile, so all-in-all a fun solve. I’ll be next week will be a doozy. 4.3 stars for this one.

MAN [“Boy howdy!”] (?) It’s been a long time since I struggled with a Universal. This one put me in my place.

THEME: Songs by pop divas are found in common phrases, 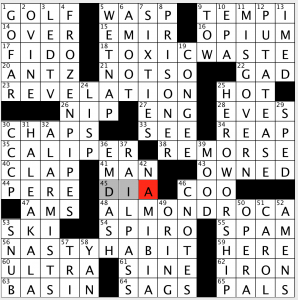 I’ve heard of all the songs, but I didn’t know their titles (HERO rang a bell, but that’s it), so the theme answers were harder for me than usual. But coupled with some of the difficult fill, it turned into a grind. I’m sure this puzzle is on someone’s wavelength. Just not mine.

Also, I was very distracted by the longer across answers that *look* like they should be themers, but aren’t. Namely, REVELATION and ALMOND ROCA. They’re both the same length as the other across themers. And neither one seems splashy enough to warrant the “we look like theme answers but we’re not” deceit. Other offenders are MISGOVERN, PUT AT EASE, ALARMISTS, and HALEAKALA (?). At 72 words, the puzzle has a themeless count, and it could’ve benefitted from a couple more black squares imo, especially with the theme answers placed as they are.

I liked RAIL PASS at least!