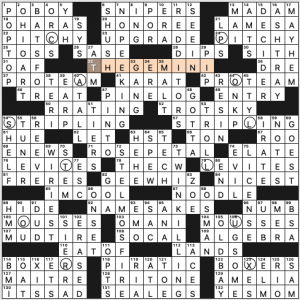 Unusual theme: Six pairs of repeated words appear in the grid, and each of those words has a circled letter to delete in order to get a word that fits the clue.

The letters taken from the answers on the left spell CASTOR and those on the right spell POLLUX. 32a. [This puzzle’s subjects, by another name] clues THE GEMINI (that THE feels weird to me). 72d. [Weather phenomenon whose double lights were said to represent this puzzle’s subjects] clues ST. ELMO’S FIRE, and I did not know that had a Castor and Pollux allusion. 73d. [Baseball double play, in slang … or a hint to understanding the 12 Across answers that have circles] clues TWIN KILLING, and that is not a baseball term I’ve ever encountered. But I don’t want to “kill” the circled letters, not if they represent people!

I like the CASTOR and POLLUX level to the circled squares, which elevates the theme, and the rule-breaking paired entries. 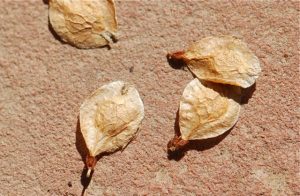 Elm tree seeds. How are these gonna “whirl,” exactly?

It’s already past midnight on the East Coast, so let me finish quickly here. Didn’t know MUD TIRE was a thing. I’d like to dispute 124d. [Its seeds whirl to the ground], ELM—elm seeds are small, wispy things that don’t whirl the way maple “helicopters” and ash seeds do. They waft. Weren’t ROSE PETAL and FRERES just in the NYT crossword yesterday or the day before? PIRATIC looks weird; I prefer piratical.

I slogged through this. Don’t know if it was me or the puzzle – I am feeling a bit sluggish this morning.

Each theme answer (helpfully starred) is a two-word phrase or compound word in which each half can follow “black” to make another word or phrase. 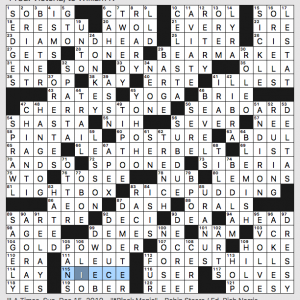 Not crazy about SEABOARD, which is pretty creaky, and I think GOLD POWDER is roll-your-own. It’s otherwise a solid theme and entirely Sunday-appropriate. I didn’t find it all that much fun to solve; I’m on record as preferring a bit of wordplay in my Sunday puzzles.

What I didn’t know before I did this puzzle: that Eydie Gorme recorded a version of ERES TU as “Touch The Wind.”

Argh. MULE DEER! Not MOLE DEER! Try as I might, I couldn’t figure out my error, so I eventually gave up on that square. I mean, MOLE DEER kinda works with the clue, right [Antlered creature whose name consists of two different animals]? And ROOTS instead of ROUTS kinda-sorta-but-not-really works for [Thrashes]. Ah well. It happens. 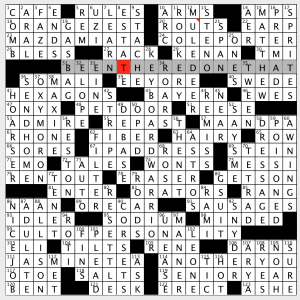 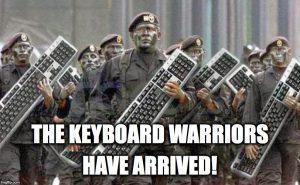 This one doesn’t feel as open as Evan’s other themelesses, but I liked it just fine. It played quite easy for me, my time being about my usual average for a WaPo. I do prefer a themeless with more teeth, but Evan has a wider audience to consider when constructing, and sometimes 21x themelesses are a tough sell.

Nothing much to scowl at. Just somewhat surprised at how much short fill it felt like there was. Happy Sunday!

THEME: Wacky “Headlines” where each of their words can be followed by “time”

This was fun for me to figure out. I like the wackiness of it, and the great title really fits. I was thankful for the nudge in the final themer in order to determine what was going on in the theme- but I glanced at the title and it all made sense. Often, when I don’t get the theme until after I’ve finished the puzzle, I don’t like it all that much. But this one was so much fun along the way that it didn’t bother me in the least, though a few of those “time” phrases (noted above) seem contrived.