This was a fun, seasonal Monday offering. 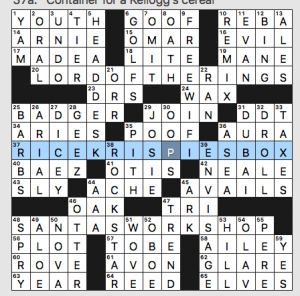 And the revealer at the bottom, where all good revealers should be: 65a [What the answer to each of the starred clues has]: ELVES. I only wish the Keebler Tree could have made an appearance.

What I didn’t know before I did this puzzle: that DUBAI is the largest city in the United Arab Emirates. I should have, but I didn’t.

Any time I see C.C. (Zhouquin) Burnikel’s byline, I rest easy, knowing it’s going to be a great puzzle. Let’s dive in! 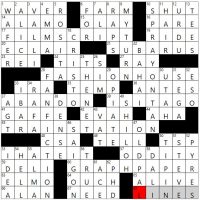 Clever! Each of the themers has LINES (spoken dialogue, clothing collections, railways, or lines on a piece of paper) in a different way. I also like that the clue for lines wasn’t just [What each of the themers has] – there was the extra bit of whimsy thrown in, which I enjoyed.

For a second while solving, I forget the constructor of the puzzle and then had a !!! moment when I got to 24A [Chickadee kin] = TITS. If this had been a male constructor, I would have a much different reaction to this word sneaking through the editors to the final puzzles, but I have no problem with a woman including it in her grid. A fun little jolt in the Monday LAT puzzle!

Other thoughts:
– I got a kick out of WAVER and WAFER crossing.
– If read / pronounced a different way, SUBARUS could be a type of dinosaur!
– Loved seeing gay [Mathematician Turing] ALAN in the puzzle. Also, how fun were FAN FICTION and SPRAY ON TAN?
– ALICE, EMMA, and ROSITA made for a woman-focused NW corner, which I dug! 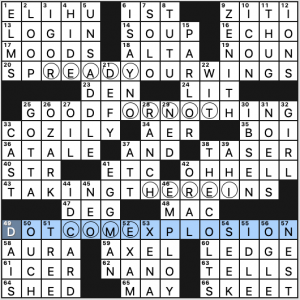 Despite the iffiness of the last one, I thought this was a fun theme. I’m really impressed Jeff was able to find phrases that fully disguised all the words, especially OR NOT, and then get everything to fit symmetrically. And then, on top of that, to get HIDE and SEEK to cross the first and last themers in symmetrical locations is a touch of serendipity.

ELIHU isn’t a great way to start your grid, but fortunately, things improved from there. My fave bits in the fill: “OH HELL” and “I SAY NO.” I thought THE COLTS got an unusual clue [Luck-less team, as of late 2019], and then I remembered there was a Stanford quarterback by the name of Andrew Luck. Did he perhaps go to THE COLTS and then leave them recently? Ah yes, he announced his retirement back in August. 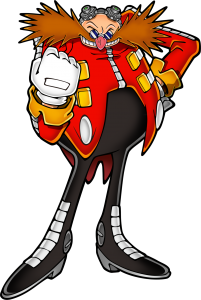 EGGMAN [Fellow mentioned in “I Am the Walrus”] was another fun entry. We would also have accepted [Sonic foe]. 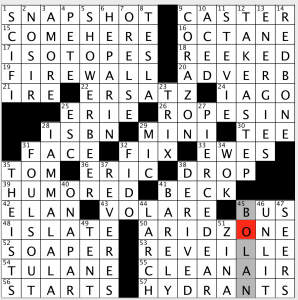 Even though I can’t claim a perfect solve, still enjoyed the heck out of this one. Got hung up in the SE with ARID . I entered ARID DUNE (which I convinced myself was a thing). DINA looked just fine (still looks more normal than ZINA!) and I was unfamiliar with the T. Rex frontman, Marc BOLAN, so BULAN didn’t feel too wrong either.

Other hiccups included MIDI instead of MINI and IRK instead of IRE, but they were easier to sniff out. Students in my study hall were eager to call out RED BONE when I asked for some Childish Gambino songs, but were silent when I asked “Who has an album named Hyperspace?” (“BECK!” one Googler finally called… ignoring my established house rules: You can ask other people around you, but no Googling!)

An unsuccessful finish, but nothing much to scowl at!

This was one of those puzzles that I loved because of the things I learned from it. There was plenty that was unfamiliar to me, but now I know them! Crossword puzzles, and especially unconstrained themeless puzzles, have such incredible potential to teach you things. What a fantastic hobby we all share! 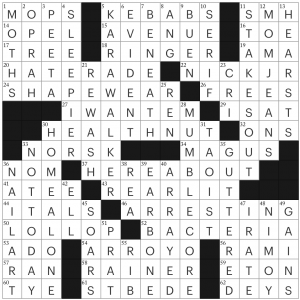 I started this puzzle on a tear through the NW, where everything from MOTHS to SHAPEWEAR (hate it) and HATERADE (love it) fell into place in a matter of seconds, but that momentum came crashing to a halt at KARA WALKER, whose name I didn’t recognize while solving, but whose incredible art, I now realize after googling her, I saw at the National Portrait Gallery last year. I love that she is in this puzzle and that I was able to re-encounter this artist whose work I loved but had not committed to memory. Have I mentioned how much I love crossword puzzles?

The K at the end of NORSK was my last square (when I realized it couldn’t possibly be KARA WALEER), and I also had a string of issues in the South, between ARROYO, LOLLOP, and RAINER, none of which I knew. Google tells me an ARROYO is “a steep-sided gully formed by the action of fast-flowing water in an arid or semi-arid region, found chiefly in the southwestern US.” LOLLOP is a fun new word for me, and is almost onomatopoetic. RAINER Werner Fassbinder was apparently quite controversial.  Learning!

Overall, I give this puzzle plenty of stars for its sheer educational value.

PS: I also want to pose a question to the commenters who take issue with the trivia bent of these New Yorker puzzles (and I am genuinely asking, not trying to call anyone out or even necessarily disagree): What else should a themeless puzzle emphasize if not trivia and new fun facts? These puzzles always have a few fun wordplay clues, but for the most part, a themeless puzzle by its very nature isn’t emphasizing fun wordplay. There’s no theme, so really the only thing giving a themeless puzzle its sparkle is its ability to make interesting or informative clues about sparkly words and phrases. Or am I missing something?