This week, we’re looking for an NFL player whose number was retired. I suspect I’ll be needing the google for this one. 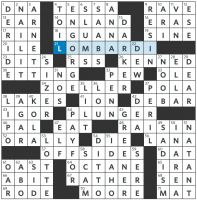 Not much stands out about the grid in terms of theme entries, except for two:

At first I thought I needed to take a “five-yard penalty” by moving five yards/squares back from some point “off” the “sides” of the grid, but, no. One merely has to figure out which letters go “offsides” next to the existing entries in order to make new words. A few entries have several options, but through trial and error, I figured out which letters not only make new words out of the entries but also spell out something that will lead us to the meta solution. I’m too lazy to type out every new word for you, forgive me, so here’s a pic of the grid I printed out and wrote on (and yes, I know that I need to replace the inkjet cartridge): 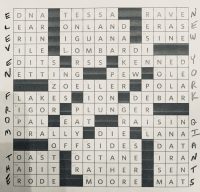 {Side note: Does DEBARK mean “to remove bark, as from a tree”? Or to somehow alter a dog so that it’s less noisy? [which seems sad for the dog]} The player we seek is ELEVEN FROM THE NEW YORK GIANTS. Is that someone who is so famous that I should know who he is, even if I’m not that into sports trivia? How many solvers, other than journalist Rich O’Malley, author of One Lucky Fan — a lovely gift for the sports lovers on your holiday shopping list — will know this without having to google or Wikipedia the answer?

Lucky for us, Wikipedia has a handy list of National Football League retired numbers, and we need do no more than scroll down to the listing of New York Giantses to find that retired #11 is Phil Simms, about whom I’ll admit a vague familiarity. We had a chat about this one in our group DM (that’s kind of like the comments section of a blog but private and ongoing) and not everyone felt that the domains of knowledge drawn upon for some recent metapuzzles were entirely representative of the breadth of human culture.

I can’t help but agree. I mean, I like to know lots of things about human culture — as the Roman playwright Terence once said, “nothing human is alien to me,” — but this one, especially as a newspaper metapuzzle instead of say, one out of many in a puzzle hunt or the like, where I’d expect to do some research, pushed my tolerance of trivia-based metas to the margins. I will express admiration for Mike’s skill in finding 26 entries that could become new words with an added first or last letter.

In any case, this one goes to Eleven.