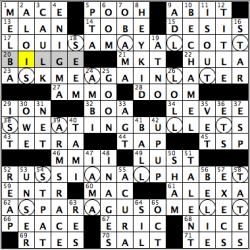 Good day, everybody! Exactly two weeks left until we put an end to 2019!

With snow in the forecast in a number of places at the moment, it is time to prepare yourself for it by, among other things, throwing out the rock salt to melt the flurries. Today’s grid literally spreads out the salt, with four letters in each of the 15-letter themed entries circled and, eventually, spelling out SALT (70A: [___ spreader (snow-melting equipment…and the puzzle’s theme!)

Any white sauce and/or dressing, whether its mayonnaise or tzatziki or anything else of that color, does not agree with me at all for some reason, though I have yet to try BÉCHAMEL (10D: [Versatile white sauce]). Given that previous sentence, however, don’t think I’m going to have it on a dish of mine anytime soon. Love learning new things, and getting to know the name ALOIS, as well as now knowing that the name of the disease is an eponym, was interesting to come across today (2D: [Dr. Alzheimer’s first name]). That (Alois) wasn’t too, too hard of an answer to get and be comfortable with since I finally have BILGE down pat and I remembered it in time for future crossword solving experiences (20A: [Hogwash]). Liked the fill of HEY KID, with it very eye-catching and, still to this day, very prominent in its usage (8D: [Oldster’s call to a youngster]).

“Sports will make you smarter” moment of the day: VET (35D: [Animal doc)]) – In contrast to the state-of-the-art stadiums with all the bells and whistles that have been built over the past couple of decades, many sports stadiums that were built in the early 1970s were so-called “cookie cutters,” circular in structure and ideal for hosting multiple sports/tenants. Probably the most (in)famous of those arenas built back then was Veterans Stadium in Philadelphia — known colloquially as The Vet — home to the Eagles (NFL) and Phillies (MLB) from 1971 until 2003. Many memorable Eagles and Phillies teams took the field during that stretch, but the stadium was mostly remembered for its dangerous and uneven Astroturf playing surface and the presence of unruly fans, so unruly in fact that there was an in-stadium courthouse installed inside of it for Eagles games during the 1990s. Judge and all. Overall, I love Philly fans, and they get somewhat of a bad reputation. But some are indeed off the rails! :-) 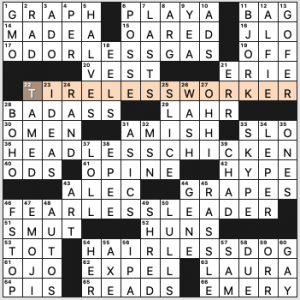 Cool theme. Five familiar phrases that start with ___less words are clued via apt phrases that can have the letters in those ___ words deleted from them:

Five more things from the puzzle:

Four stars from me, and here’s Sam Cooke to play us out.

Ross Trudeau has been so fantastic with collaboratively constructed puzzles, that I was secretly hoping “Two-Part Harmony” might be one of them! All the same, let’s dig in: 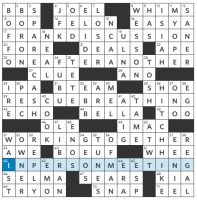 17A: FRANK DISCUSSION [Heart-to-heart]
23A: ONE AFTER ANOTHER [Back-to-back]
39A: RESCUE BREATHING [Mouth-to-mouth]
51A: WORKING TOGETHER [Shoulder-to-shoulder]
62A: IN PERSON MEETING [Face-to-face]

Wow! This puzzle includes five 15-letter theme entries in a way that doesn’t make the rest of the puzzle’s fill garbage (when the worst the puzzle has to offer is ELIDE MYOPE LIBRAN, you’re in a good spot!). And, I love the consistency of the [Body part-to-body part] clues that reference specific American English idioms. If they were the correct numbers of letters, I could see switching the clues and fill for the theme entries, but I absolutely understand why Ross approached this grid the way he did. It was an enjoyable solve for me!

A few other thoughts:
– Will we ever be able to clue 13A OOP as [“And I ___!”]? It was, after all, the gif of the year for 2019!
– [Cry to avoid a green bean?] for FORE is wonderful cluing! 58A [Befitting a queen] for REGAL is also a great example of more inclusive cluing!
– It was nice to see FUBU and both MELs of the Spice Girls in the grid!
– Having [Belt setting] WAIST in the puzzle at this time in the holiday season feels hilarious and cruel (this writer says as he shoves holiday snacks into his mouth!). : )

With the anticipation of a snow day, my friend came over last night- a novice solver- and was determined to solve this puzzle sans help from me. It was very difficult to stay mum, but she hacked her way through most of it over the course of a couple hours, only asking toward the end for a couple of nudges. It was interesting to realize how much crosswordese is in a grid that I’d consider relatively clean, like this one.

THEME: Words/phrases that have types of vehicles at their ends. 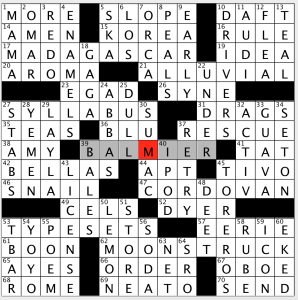 Things that I wouldn’t think twice about tripped up my guest solver. Those included YEMEN, T-BAR, DYER, SRO, ACT IV, CELS, EKED, PEALS, TOREROS, AYES, and BOON (amongst others). Maybe SRO and EKED strike me as solidly crosswordese. Perhaps DYER too. But to her, a lot of these words made her look a little sideways at the puzzle.

Also, it was difficult for her to decipher what the revealer clue was asking for. Still, she enjoyed, especially when I helped to explain the theme after she’d uncovered a couple. There was that AHA moment, and she was able to infer the VAN and TRUCK endings.

ALLUVIAL and CORDOVAN were two entries that were new for both of us.

Overall, I think the puzzle was able to spark interest in a new solver. And I definitely enjoyed the ride, no matter how hard to sit on my hands and not fill it in! 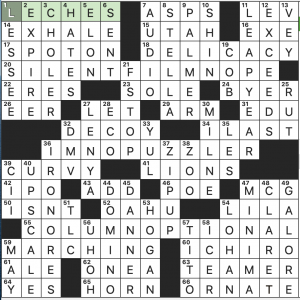 How many phrases can YOU think of that have the consecutive letters MNOP in them?

Yeah, I can’t think of any more either! But I am tired; didn’t sleep well this weekend but was out for 10 hours last night. I feel like I still haven’t woke up! Again, this evokes for me a great mental image of a great brainstorming session! 4.4 stars today. 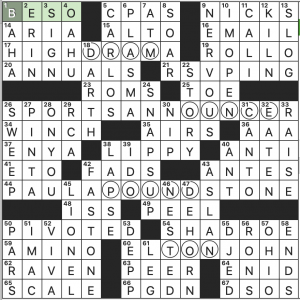 This is the first LAT Tuesday I have done in quite a while that has no revealer! It does have circles, though:

I told you it wasn’t complicated. All of these units of weight are hidden nicely in another word, although POUNDSTONE may be a little less hidden; I doubt there is another option for this though. On the positive side, there are in order from lightest to heaviest! Well done. 4.2 stars from me.