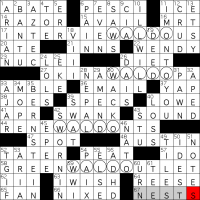 hello and welcome to episode #60 of matt gaffney’s weekly crossword contest, “I Spy”. i solved this one without the instructions, since matt said it was intended to be a week 1 difficulty level. what are the theme answers?

all four of these goofy phrases include the consecutive letters WALDO across a word break. in a nice touch, the letters are broken up four different ways in the four phrases (L-DOPA is pretty much the only way this could work!). the name WALDO and the title strongly suggest the picture book series where’s waldo, which must be the meta answer. indeed, the instructions ask for a well-known book series, so yeah, definitely easy enough for a week 1.

not too much else to say about the grid. i was a little surprised to see both VIII and III in the fill; although those are less objectionable than random large roman numerals like DCLI, i still think it’s one too many for a grid. (there’s also WWI, which is unobjectionable in and of itself but perhaps draws even more attention to the too-many-roman-numerals issue.) i enjoyed the medium/long downs, {Warning to a con artist} I’M ONTO YOU, {He wrote “Gee, Officer Krupke” with Sondheim} leonard BERNSTEIN (or is it berenstain?), and {Spite} ILL WILL. the other 7-letter down, SWORN IN, is less inherently fun, but i enjoyed the clue, {Ready to serve}, which looks like a clue commonly seen for shorter entries like ONE-A or DONE. nice use of a crossword trope as misdirection.

that’s all i’ve got this week. what’d you think of this one?