Today’s AVCX puzzle is a meta contest from Francis Heaney – we’ll have a review up once the window for submitting the answer has closed.

The title made me think we’d be working through a synonym-themed grid, but that’s not the case. In a surprise move, we have a stacked revealer starting at 59a: [With 65-Across, official who might order the vehicles that end the starred answers] SECRETARY / OF DEFENSE. The other theme answers end with a word that is also a vehicle used in war. 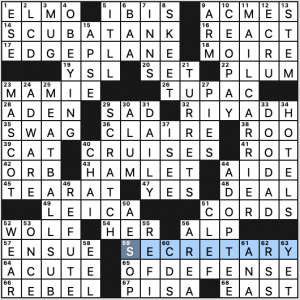 So that’s one for the Army, one for the Air Force, and two for the Navy, presumably because they have to carry the Marines around. I like how the three major services are represented. 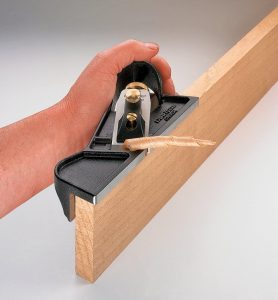 And how about that stacking of theme entries? Quite impressive if you ask me, at the cost of only a few small bits of crosswordese: ESE, LCD, CDS, RSS—all of which we’ve seen many times.

My only quibble would be with the title which doesn’t really have much to do with the theme; i.e. I wanted something in the grid to “mean” war. To my mind, “War Machine” would’ve been a good title, or possibly “Made to Order.”

Despite the theme answers taking up most of the marquee positions, there’s still some sparkly fill: ADOPTEE, RIYADH, HAMLET, SCRATCH, DOODAD, ADWARE. I wasn’t sure about CEO PAY [Fig. often cited as a measure of income inequality], but I think I’ve heard it as a phrase before. And I’m with Amy in pooh-poohing all those preposition-ended phrases like TEAR AT (though I know how useful they are as a constructor). Not much else set of the scowl-o-meter. 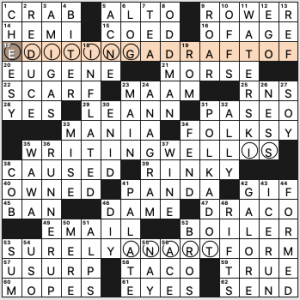 So at first I was bored by the clunky theme, and then I took note of the circled words. Ha! 17a. [Start of a long-winded musing from an author] clues EDITING A DRAFT OF / WRITING WELL IS / SURELY AN ART FORM. Terrible, right? Much crisper when edited down to the circled EDITING IS AN ART. Indeed!

Fave fill: FOLKSY, BOILER (just because I am so well acquainted with my building’s new boiler, which never wants to give us just the correct amount of heat), POLKA DOT, and WATER SKI.

THEME: Apple types turned over and hidden in theme answers 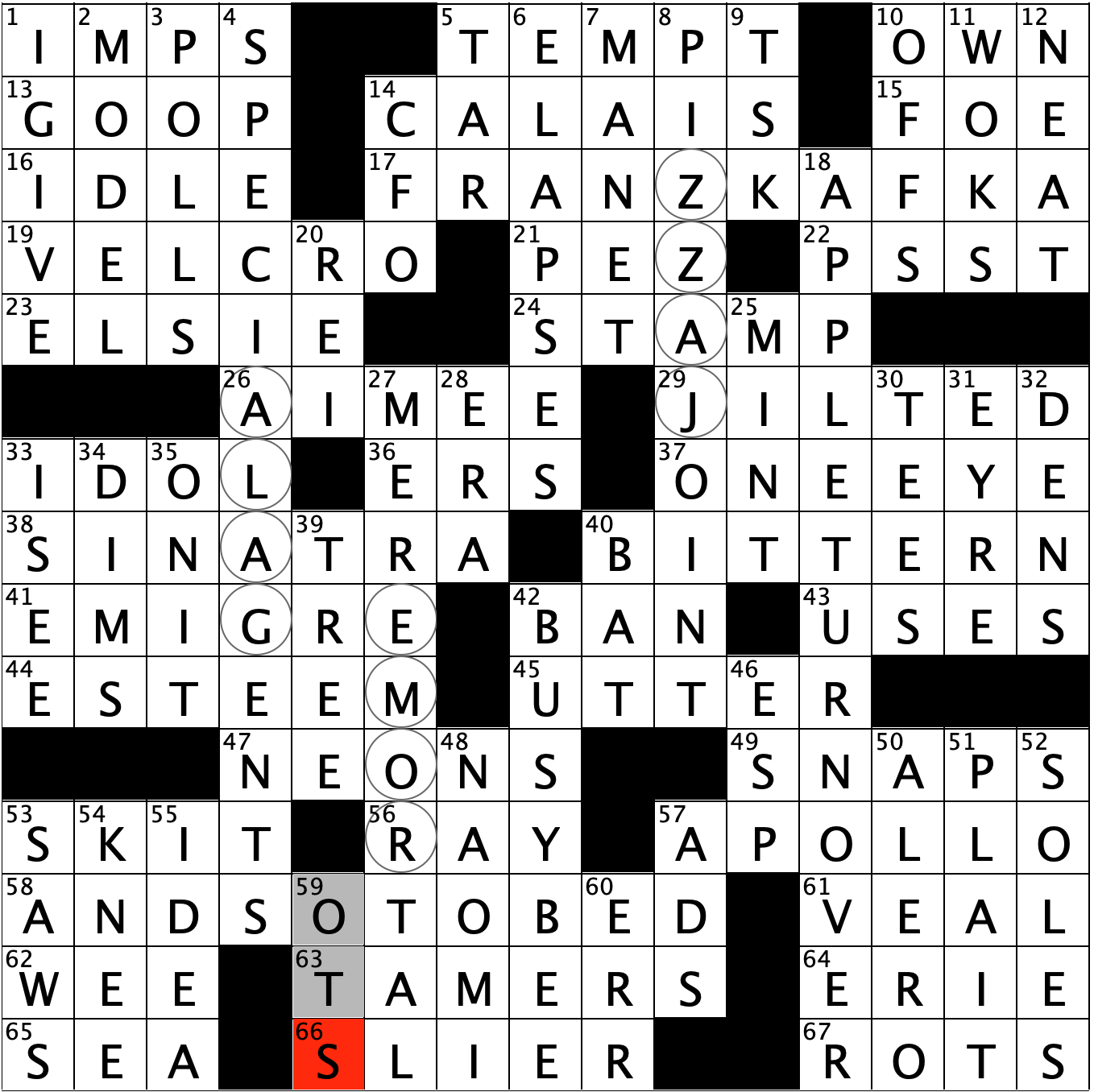 My expectations for a Zhouqin Burnikel puzzle are always high, and I am never disappointed. This puzzle was a real joy to solve. Great theme with a perfect revealer and so beautifully constructed. GALA was the apple I was most familiar with – but upon solving them, I knew of JAZZ and ROME so they all felt fair and the answers they’re hidden in are great.

As for the fill – so much to love. I love seeing APOLLO [Historic Harlem theater] clued for the theater over the god, and the long answers FRANZ KAFKA and AND SO TO BED are great. All of the mid and short length answers are also so enjoyable to come across and so smooth and clean.

Overall this puzzle is as its title says, Delicious!

My only complaint here is I understand many people don’t get the circles in Universal puzzles (unless this has changed?) which would be a big loss for this theme. 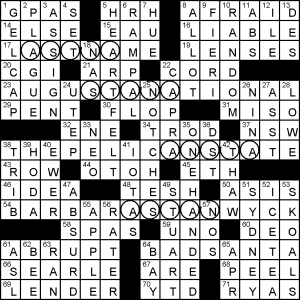 Apparently, tis the season to recall not very distinctive early 2000’s Christmas comedies. BADSANTA can be seen in cryptic crossword speak to mean “anagram SANTA”. However, SANTA only anagrams to SATAN, so instead the letter string is embedded in unrelated phrases. Boldly, three spanning entries have been chosen: AUGUSTANATIONAL and THEPELICANSTATE lend a Southern air, while BARBARASTANWYCK represents the Blue.

Tricky spots: RYAS are [Shaggy Scandinavian rugs] that were in fashion in the late 60’s and still are to some extent only in crossword-land. [Flutist Jean-Pierre] is RAMPAL, a not very guessable surname. Is [Comic-book store owner on “The Big Bang Theory”], STUART a major character? It wouldn’t have been my go-to STUART for sure!