Add-some-letters theme today with those letters being UM, as hinted at by the title. 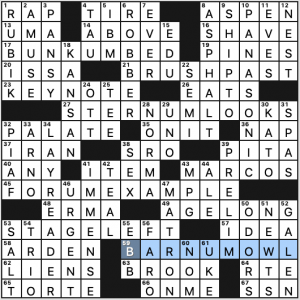 That works. Nothing LOL-funny, but solid enough, I think. I appreciate the consistent execution with the UMs always added to the end of the first word. The literal approach in the title is fine, but I’d be inclined to go a more humorous route and try to conjure up an image of a speaker who can’t say a thing without, um, hesitating.

Most of my solving trouble came from the unthemed sections of the NE and SW, especially the SW where STAGE LEFT [Exit spot, at times] was not coming to me (I wanted something-LANE) and I resisted LAY READER [Bishop’s underling] (I wanted LAY RECTOR). But the fill in those corners is nice (aside from SHIP TO) with ASPHALT, PANASONIC, IMMENSE, URGENT, and BRUSH PAST. Elsewhere, we have KEYNOTE, AGE-LONG, PALATE, MATRON, and the villainous Ferdinand MARCOS.

I’m inclined to think the grid runs a bit too heavy in the crosswordese department with OTT, SRO, PIAF, ARNO, ON IT, and ON ME. I don’t mind UMA and ISSA so much as they are both currently active entertainers, but you know they have been and will continue to be overly represented in crosswords vs. their peers. 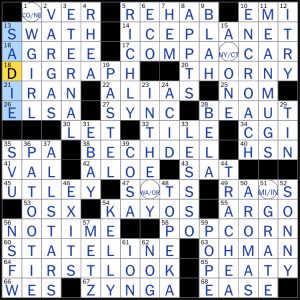 Today’s NYT is from Erik Agard and Andy Kravis, and it’s a nice one that took a second to catch on to, but was nicely executed.

For each circled square, both the across AND down clues running through the entry give two sets of clues.  Going across:

The connection between the letters that can fit in each of those square makes sense after the revealer at 60A:

Each special square features the abbreviations for two states that share a border – Colorado and Nebraska, New York and Connecticut, Washington and Oregon, and Michigan and Indiana.  Nicely done on the answer set here, fellas! 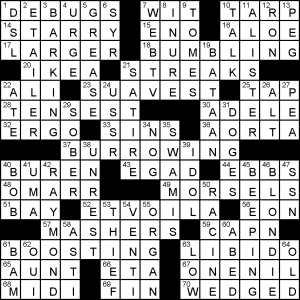 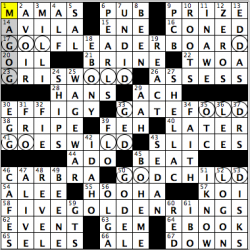 Good day, everybody! First off, apologies for missing the last two turns at-bat on here. Hope all is well with you and, for those who are living in places where the cold has ratcheted up, hope you’re staying warm!

Brendan is in the holiday spirit with today’s grid, with five theme entries containing circles on the perimeters and, eventually, all spelling out the word “gold.” To top off the theme, the final theme entry, FIVE GOLDEN RINGS, acts as the reveal (58A: [“12 Days of Christmas” gift, and hint to this puzzle’s theme]).

Went to school for many years in a Catholic school, but did not get to the point of learning about Gog and MAGOG, at least until right now (1D: [Gog’s partner in Revelations]). If one removed the writing poetry portion and added “or where freelance journalists write and file a number of their stories” to the clue for CAFES, that would describe me perfectly (46D: [Places to do crosswords, or maybe write poetry]). I definitely do not know all of the Jewish expressions, so seeing FEH instead of “meh” threw me for a loop even though it had to be correct given its crossings (39A: [Jewish grunt]). Outside of initially putting in “sends” for SHIPS, a pretty straightforward solve (24D: [Uses UPS]).

“Sports will make you smarter” moment of the day: LATER (40A: [“Ask me in a bit]) – Remember when one of sports broadcasting’s all-time great journalists hosted an award-winning late-night talk show? I sure do! From 1988 to 1994, NBC Sports’ Bob Costas hosted an incisive, no-frills, interview-format talk show called Later (known as Later with Bob Costas , a show that featured one-on-one interviews with some of the biggest stars in sports and entertainment. It was a departure from when I usually saw Costas back then, hosting sports shows, but the show rivals any of the best interview-format programs in recent television history. Later won a 1993 Primetime Emmy for Outstanding Informational Series, with Costas as host. Costas left the show in 1994 and people such as Greg Kinnear, Judd Nelson and Cynthia Garrett hosted the program before the series ended in 2001.