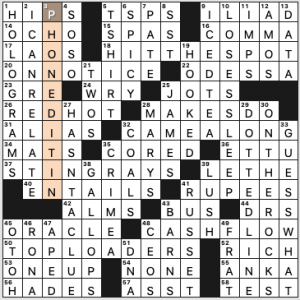 Yeah, so it turns out to be not a stye but a chalazion, which is much less crossword-conducive. My left eye is dominant, but right now it’s a bit blurry from the ointment. So I solved the puzzle without the timer, didn’t feel too hard. Not in the mood to blog much with my unfavored eye in charge. 3d PHONED IT IN is apt for me. (Not for the constructor. Robyn Weintraub takes great care in building her puzzles, particularly her themelesses!)

What I liked best: Familiar, smooth phrases like HIT THE SPOT, ON NOTICE, MAKES DO, “I CAN RELATE,” PHONED IT IN, HASN’T A CLUE, LOSES SLEEP, DOTTED LINE, ON THE ROCKS, and “GUESS WHAT?” These are all so much livelier than, say, most 10-letter nouns or foreign cities. 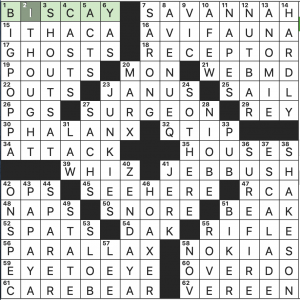 Christopher Adams has a puzzle site that I believe I have mentioned before on this blog. This puzzle evidently made the cut as marketable, and I can see why. This is a nice themeless with nothing too ugly in it, and a fair amount of interesting fill to boot. This is one of those themeless patterns that shouldn’t be too difficult to fill, as there are no entries longer than 8 letters. But there are 12 of those, and they from wide open stacks in the corners, so I don’t want to minimize the difficulty of grid-filling done here. This is a good 72-word puzzle that was fun to solve. 4.3 stars from me.

That is all! Time for a nap! 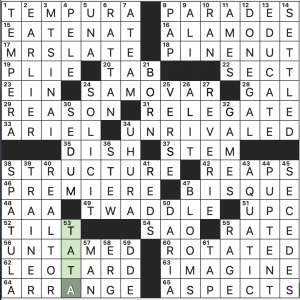 This will be my easiest blog post I have ever done. I didn’t realize it last week, but this Stumper and the one on the 21st were re-treads, and the intrepid Amy Reynaldo was already blogging full tilt in 2009. The following is her recap from October 31, 2009:

I had no idea which vowel belonged in the 54A/50D crossing. [Personal-finance guru Dolan] turns out to be DARIA, but for all I knew it was a less common DORIA or something. SAO is clued as [Neptune moon discovered in ’02] and I, for one, do not follow the news about small moons orbiting distant planets. There are certainly less esoteric ways of clueing SAO.

• The TEMPURA/TEMPERA crossing. Don’t care for TEMPURA’s clue, [Seafood serving], being reused for BISQUE. TEMPERA’s a [Type of paint].
• A LA MODE is clued as [Apple-pie order] but involves actual apple pie and not the idiom “in apple-pie order,” meaning “tidy.”
• MR. SLATE is [Fred Flintstone’s boss]. Took a zillion crossings for me to remember his name. What better to draw a blank on than SLATE?
• TWADDLE, or [Horsefeathers], is a great word.
• [“…the Flying Trapeze” guy] is LEOTARD.
• Who’s the best athlete? PELE is [IOC’s Athlete of the Century], while Muhammad ALI is [SI’s Athlete of the Century]. Did you see the Flip Wilson–as–Geraldine clip with Muhammad Ali that Rex posted at L.A. Crossword Confidential the other day? Funny stuff, and Ali was such a cutie in his younger days.

• EATEN AT is clued as [Annoyed]. “This puzzle has eaten at me”?
• I like SPATULA, but the clue, [Kitchen blender], feels off to me.

Neutral zone of clues I needed lots of crossings to get:

• [Toon teen in an ’89 film] is ARIEL, the Little Mermaid. Never saw it. (Neither have I!)
• [Five-petal flower] is SEDUM. There are others with five petals, I’m sure.
• [Quarters with buttons] are PUP TENTS. They have buttons? Google tells me the old military pup tents buttoned together…up to World War II. We need to know 1930s tent technology now?
• [Huckleberry’s father] is his PAP. Don’t be dissing him, now. We don’t want any pap smears here.

There you have it! That was easy, wasn’t it? Thoughts on a reprint of an older puzzle are welcome below!

I really like the way that the across answers run through the two down themers that are being mixed. Even though half of each theme answer (whatever follows the color) is completely arbitrary, this is a relatively tight grid keeping in mind that there is not much room to play around with theme answer placement.

The theme answers were all fine, but the fill took a hit in a few spots, and with the exception of NEAR BEER, there wasn’t much to keep it fresh. Still, it’s pretty standard, though I coulda done without A CARE.

Another late-posting puzzle, another quick re-cap.

The phrase, AULD LANG SYNE (111a, [Seasonal title made of two-letter resolutions of the long Across answers]), is broken up into bigrams and each pair of letters is added on to the ends to “resolve” well-known phrases. 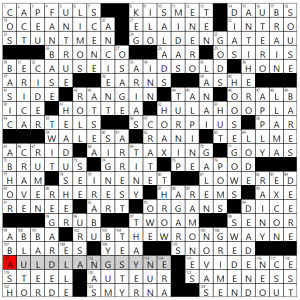 The breaking down of the revealer phrase into pairs of letters feels random, but I like most of the resulting new phrases.

An odd theme with a mix of high and low points. 3.5 stars.