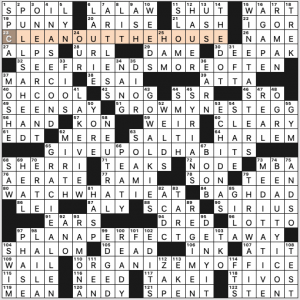 Various New Year’s resolutions are clued as if they’re specific to something within the phrase:

Fave fill: GO WALKIES, LAKE VIEW (which is also a neighborhood in Chicago—and of course, West Lakeview does not have views of Lake Michigan), GRACIE ALLEN, THROW A FIT, and ONE PERCENT clued as [Megarich group].

Another non-standard sized grid (18×24) two weeks in a row? What’s up with that? A lot, actually!

THEME: Eight entries in the grid turn upwards at their ends, and the portions that go up collectively spell a message. 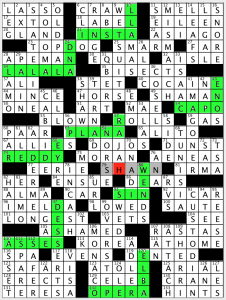 That makes the message, reading south to north, A BLESSED NEW YEAR ONE AND ALL. Rather Dickensian, no?

Although my time still fell in the “average” range for me, I found this one delightfully more difficult than normal all around. I grokked exactly 0% of the theme until I finished. I mean, I saw that letters were clearly missing from the ends of the starred clues, but I neglected to see that they turned upwards in the grid. Oddly enough, it took me a solid minute longer than last week’s meta to figure it all out at the end.

And that, my fellow solvers, is why it’s always important to keep the puzzle’s title in mind. Doh!

It also took me a moment or six to retroactively find the starred entries and interpret the instructions in the accompanying note: Certain letters in this puzzle, read from bottom to top, will spell my seven-word note. A tad cryptic, but with a touch of elbow grease, easy enough to suss out. Also, anyone catch the nudge at 133A? [“You should take turns solving this puzzle” and others] HINTS. “Take turns” in this case hinting that you should “take a turn” northward in this puzzle. Clever, but I completely missed it!

FAVE FILL: (I should say I liked most of the fill, particularly because of the difficulty provided by the clues, but there are a few winners).

I tripped on a few names here and there, but nothing that wasn’t fairly crossed.

And of course, it should be noted that the across theme answers are still acceptable fill before they turn upward. ASSES, CAPO, SIN, LA LA LA, OPERA, INSTA, PLANA and REDDY. Ok, maybe REDDY looks a bit weird, but it’s had its day in many a crossword clued as [Helen who sang “I Am Woman”].

Happy… errr… BLESSED… New Year, everybody! And of course, thanks for another fantastic year of puzzles, Evan.

P.S. For some reason, I found this bizarrely entertaining:

This puzzle takes one of the more annoying things about contemporary crosswords and makes an enjoyable theme out of it. Gary stuck E in front of standard phrases with wacky results. 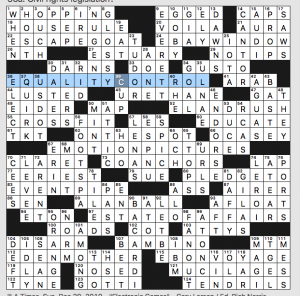 A solid, successful theme that was a lot more fun than finding ETAIL or EZINE or ECASH as random (bad) fill.

What I didn’t know before I did this puzzle: that BACARDI owns Dewar’s and Gray Goose.

THEME: Series of letters in theme answers can be unscrambled to spell the name of a vegetable.

I’m assuming that the in-print version of this puzzle does not feature circled letters- correct me if I’m wrong (I’d be delighted to be wrong… I could only find the 15x online in its print form). It probably asks the solver to count letters because Universal hasn’t embraced the idea circling letters in the grid (though they certainly publish an awful lot of theme types that require circles).

This isn’t the sort of theme I particularly enjoy, namely because the gimmick doesn’t aid in solving the puzzle and isn’t particularly interesting. It’s easy enough to figure out what’s going to happen before solving the puzzle (Circled Letters + “Mixed Vegetables” as a title = Pretty Obvs). So I essentially solved this as a themeless. Unfortunately, it doesn’t have the sparkly fill of a themeless, so I got bored pretty quick. CASH SQUEEZE was a new phrase for me, though I can totally relate to it! GROCERY CLERK doesn’t strike me as a stand-alone that we use in everyday vernacular.

The rest of the theme answers are fairly solid, BOARDWALK EMPIRE being my favorite (though anyone who’s familiar with the show is unlikely to need any crosses whatsoever).

I appreciate the construction and the work that went into finding symmetrical theme answers where the “mixed vegetable” bridges the two-word phrases. But in the end, I just slogged through it.