I think this was a personal best for me. It’s a very smooth Monday puzzle with a solid theme. 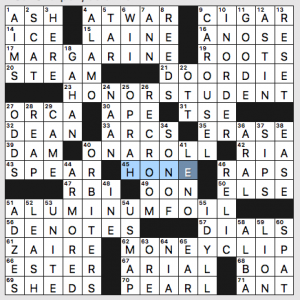 What I didn’t know before I did this puzzle: I knew Davy Crockett fought at the ALAMO but didn’t know he died there (or had forgotten). 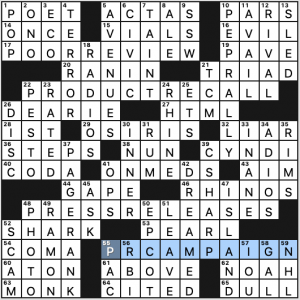 AES has become known for bringing us unusual or tricky themes. This one is a little more straightforward, as befitting a Monday slot, but it’s still a pretty constrictive theme—having to find enough phrases with a business slant that all begin with P and R. And tying it all together in one over-arcing story is in line with the revealer and makes for a nice touch. Cleverly done!

Oh, and notice the crossing themers in the NE and SW corners which is only made possible by the constructor offsetting the themers in the 5th and 11th rows from the edge by one square. It’s always nice when the crossword gods grant you a bit of serendipity, but sometimes the constructor has to make that extra effort to meet the gods halfway. Well-handled.

There’s so much theme material here that there simply isn’t room for any other niceties beyond AVENUES and DREAMED. But there’s nothing scowl-worthy in the fill, and the solver’s interest is kept with entries like DEARIE, and OSIRIS and CYNDI Lauper.

A very tight theme and construction deftly executed. It may seem very simple, but to me it looks like it required a fair amount of finesse to pull off smoothly. Four stars.

This tightly crafted puzzle is another installment in the New Yorker’s “Year in Review” crosswords, this one from Natan Last on “2019 in News and Politics.”

I just want to say up front that I *tried* to be the first person to put MUELLER REPORT into a puzzle by building an entire themeless around it the day the MUELLER REPORT was released, and several months later that puzzle was rejected from a not-to-be-named publication, so congrats on beating me to it, Natan *angry face emoji* (jk). 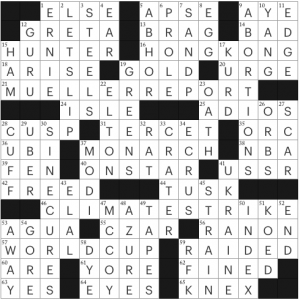 ANYWAYS, that aside, this is a comprehensive recap of the news in 2019! As a rabid consumer of news myself, I appreciate that the puzzle wasn’t straight politics, despite the utter impossibility of consuming news without it somehow eventually being connected back to politics.

That’s so much theme! I think what makes this puzzle so impressive is that it doesn’t sacrifice fill for content and instead found a way to build a really solid grid around a few key entries (MUELLER REPORT, CLIMATE STRIKE, HONG KONG, WORLD CUP, UKRAINE) and then clue as much of the fill as possible in relation to the news in 2019. Nothing feels shoehorned in, except maybe the Marianne Williamson angle on ORBS, but that’s actually hilarious and I’m glad it was included. I guess I could live without Epstein’s RAIDED private island.

Regardless, I loved this puzzle. Lots of stars from me.

I was having a good time… and then I hit the south. Ouch!

I finally gave up in that SW corner after struggling to spell YANG ZHOU. COCHISE vaguely rings a bell as a name. WIMSEY was unfamiliar to me. And because I refused to change 48A [“This guy!”] from HIM to I AM (thumbs pointed towards self), I never had a shot. I figured the answer to 49D [In repose] was IDLE or perhaps even ICED, though neither induced any sort of confidence. Lastly 52A [Major African flower] ZAMBEZI RIVER was unfamiliar to me (and yes, I initially fell for the “flower” trap thinking I was looking for some sort of foreign petunia or something, but the RIVER part fell in eventually). ZORK and K STREET was another brutal crossing.

Everything north of that river was just fine though! 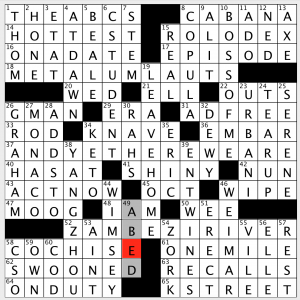 And of course, the aforementioned SW + ZORK.

A little too crunchy for me today.

Happy almost New Year! Let’s dive into today’s debut puzzle (hooray!) to see if it has any year-end words of wisdom for us. 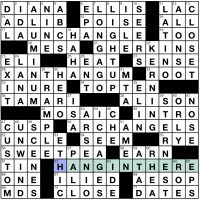 17A: LAUNCH ANGLE [Baseball batting statistic measured in degrees]
28A: XANTHAN GUM [Common food thickening agent]
50A: ARCHANGELS [High-ranking heavenly beings]
62A: HANG IN THERE [“Don’t give up yet!” … or a hint to the answers to starred clues]

Each of the theme entries literally has the word ‘hang’ in it, maybe as a lovely way to remind us to HANG IN THERE as we head into 2020! This theme was cute, if not a bit light on theme entries (only 42 theme squares), but I’d rather it that way than overpacked with grid fill that’s rough. I’m not much of a sports person so I’d never heard of LAUNCH ANGLE before, and I imagine that XANTHAN GUM might be tough for the non-cooks/scientists, but it all felt fair to me in the end. Bravo to Matthew for his first published puzzle! Here’s to many more lovely puzzles to come.

Other thoughts:
– Women in the puzzle today: Princess DIANA, ALISON Brie, LANA Del Rey, ELIN (sadly only clued through her abusive ex-husband), Pat Benatar, and ROE [___ v. Wade]. A nice (if all white) mix representing a few different eras of pop culture.
– There was also a nice food/cooking subtheme: GHERKINS, HEAT, XANTHAN GUM, ROOT, TAMARI, RYE, and DAL. My diet starts in January!
– This puzzle was a smooth, lovely solve – thanks for a strong puzzle-solving ending to 2019!