Title: “The Dark Side”
Prompt:The 2019 mega-meta is a famous rock song whose title describes what I did 12 times to my copy of this grid before I wrote the clues.
Answer: “Paint It Black” 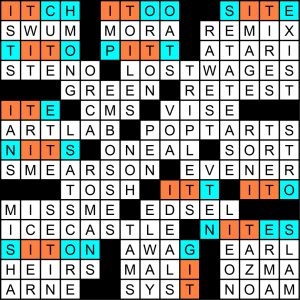 Knew something was up when nothing in the 4×4 northwest corner would fit. 1a. [Stuttered syllable at the beginning of a big Bowie hit] was probably CHCH from “Changes,” but how could 1d. [Bleecker and Bourbon, say: Abbr.] be anything but STS (short for “streets”)? That doesn’t work with a four-square space, and then it started happening again elsewhere — such as 9-A, which is four letters long but appears to be looking for a 3- (or maybe 2-) letter direction abbr. with [Dir. from St. Louis to Nashville]

I soon realized there were going to be some blank spaces in here, so I chipped away at the parts I could fill in fully, leaving alone the meant-to-be-blank squares when necessary. Some tricky short ones in there, like 46a. [Mr. ___] for – – T. I pity the fool who tried 46-A as their first clue in the grid.

What emerged was an archipelago of two-letter blank cells, eleven of which were horizontal and just one of which, the last one, was vertical. That was a bit odd and as far as I can tell not meta-related, so slight aesthetic ding (.05 or .1) for that.

Took me an embarrassingly long time to notice that each of those cells can take the letters I-T to form cluable entries on both the across and the down. Take the intersection of 22-d TRIPLES and 46-a that “Mr. ___” clue above, yielding _ _ T. Add the letters IT into the blanks and you get TRIPLES and ITT (as in Cousin), plus DEALS becomes IDEALS on the first down.

Look at the remaining letters in each entry, highlighted in blue in the grid above, and they spell: CH/OO/S-E/T-O/P-T/E/N-S/T/O/N-ES/S-ON/G, or “choose Top Ten Stones song.”

Could it be “19th Nervous Breakdown”? “Mother’s Little Helper”? “Sympathy for the Devil”?

No, the one that makes sense here is “Paint It Black,” since if Pete had painted those 24 squares black before cluing, then I would’ve had a much faster solving time.

That’s a very nice meta, and this was another great year of Muller Metas; a little easier than previous years, but I didn’t go 12-for-12 so I have no grounds for complaint there! Does Pete have another year in him? I certainly hope so — let’s remind him in comments how much we enjoy these things and see what happens. I’ll gladly blog ’em if he writes ’em.