Happy Eighth Night of Hanukkah, folks. There are enough candles on my menorah to set off the fire alarm (and that’s not a euphemism). This’ll be my last WSJ review of the decade, but not my last meta review, since I’m covering for Joon for the last MGWCC of the decade, which will be posted after the deadline at noon on New Year’s Eve. Yeah, I know technically the new decade doesn’t start until 2021 but whatever. Starting things off in Year Zero has a nice ring to it. 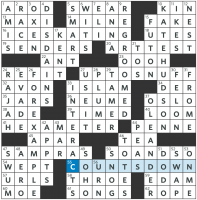 So. For this one, we’re looking for something associated with New Year’s Eve. For the last 15 years, I’ve celebrated New Year’s Eve with some friends who have kids the same age as mine. When they were littler we’d put them all to bed and then drink and play board games; as they got older we used to have a pretend countdown around 8pm and then put them to bed. And now most of them are old enough to stay up until midnight and play board games with us. Excuse me a moment while I muse upon the inexorable passing of time and listen to the most melancholy holiday song of ever, 1970s soft-rock legend Dan Fogelberg’s “Same Old Lang Syne.” (If you want to listen to the traditional “Auld Lang Syne,” how about a cover by a drunk Scottish punk band dressed in kilts? [Editor’s note {The editor is me because I am editing myself}: The band, the Real McKenzies, are Canadians from Vancouver who are credited with helping to start the second wave of the Celtic Punk movement.])

And so to the puzzle. Made quick work of the grid despite NEUME there in the center. No standout themers except one:

With that, I remembered that a handful (literally two handfuls, it turns out) of the clues had numbers in them, in a sort of odd (and even, it turns out) way. Here they are in “countdown”:

Let’s see — the first letters of those entries spell out CKISHISFTR. Well, of course! Everyone knows CKISHISFTR, that beloved New Year’s Eve tradition. Maybe try anagramming? I get … FISH TRICKS. Maybe that’s something associated with New Year’s Eve? Somewhere? At this point I even googled fish tricks new year’s eve just in case there was some tradition with which I was unfamiliar. Nope. What else could we do with a bunch of words and some associated numbers? (Is … that what the person who invented crossword puzzles said??) Turns out, the length of the entries sorta “count down” … what if I indexed the entries by their associated numbers? Namely, take the 10th letter of the COUNTS DOWN, the 9th letter of KATE HUDSON, etc.

And there we have it: NOISEMAKER, which is something associated with New Year’s Eve if you don’t have to worry about waking up the sleeping kids in the next room who thought that the countdown was a few hours ago.

Let’s make some noise and ring out this damned decade with those bards of old, Messrs. Horovitz, Yauch (of blessed memory), and Diamond: