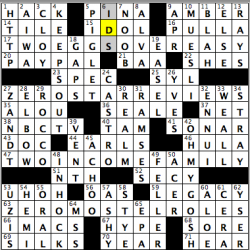 It’s New Year’s Eve, everyone! Here is hoping that you’re doing well and that you’re ready to get down and boogie on the dance floor with Barbara Walters and Hugh Downs as we get set to ring in 2020!!

Speaking of 2020, each of today’s theme entries starts with a number and, when put together in order, spells out the YEAR that we are just hours away from officially being in (70A: [Happy New ____! (the starts of four answers spell out the numbers on your party hat)]).

For the longest time, I held out from having an online money transfer account at places like PAYPAL, but finally gave in about a couple of years ago (20A: [Online purchase method]). Like many other things I held out on doing until much later, I now wish I had signed up for it sooner because of the convenience. We have some serious revolutionaries smack dab in the middle of the grid, with CASTRO (24D: [Cuba’s Fidel]) crossing SEALE, whose name I don’t remember ever seeing in a crossword that I’ve solved before (36A: [Bobby who co-founded the Black Panther Party]). I think I’ve heard of the ROCCO in question once or twice in passing, but his name didn’t ring a bell when coming across the clue and needed the crosses to get it (29D: [Celebrity chef and cookbook author DiSpirito]). Though it’s definitely not baseball season yet, we have a baseball reference in ALOU (35A: [Moises or Felipe of baseball]), but the next graph delves into some hardball more by talking about one of the game’s greatest hurlers…

“Sports will make you smarter” moment of the day: FELLER (49A: [Guy, informally]) – It is without a doubt that one of the greatest baseball players of all time was a Cleveland pitcher named Bob FELLER, who led the American League in wins six times and in strikeouts seven times in a career spanning 20 years (1936-1956) and interrupted when he served as a Chief Petty Officer on the USS Alabama during WWII. Amazingly enough, Feller skipped the minor leagues and made his debut with Cleveland at 17, at a time when feared hitters like Ted Williams and Joe DiMaggio were wreaking havoc on pitchers in the Junior Circuit. An eight-time All-Star known for his blazing fastball, Feller threw three no-hitters and an astounding 12 one-hitters during his career, one which was memorialized in the Baseball Hall of Fame in 1962. 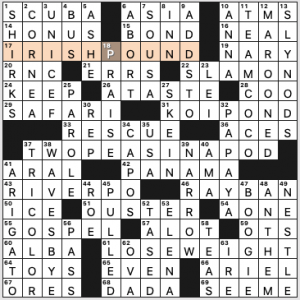 Really a quick solve. Monday’s was extra-fast, too.

Been a while since I did a Bechdel crossword test. Here we have HONUS Wagner, a random DADA, SOUSA, and Conan O’Brien in the TEAM COCO clue. Also Goya in the ALBA clue, fictional Crusoe in the MAROONED clue, fictional James BOND, up against Patricia NEAL, Duchess of ALBA (rather than contemporary actress/entrepreneur Jessica Alba), fictional Disney cartoons ARIEL (here’s a Dean Friedman video for Jenni) and ANNA (what, there was no actual human ANNA that would work here?), and Justice ELENA Kagan. –7, +5, that’s a minus 2. Bzzt. DADA could have been swimmer DARA Torres crossing a TASER to even things out.

Overall, let’s call this one 3.75 stars, not subtracting much for the IRE at touting the LOSE WEIGHT New Year’s resolution. 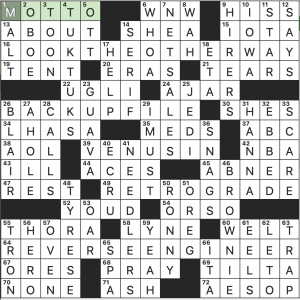 When I first saw this puzzle, I thought my computer has errored out and messed up its font!

How well can you read backwards? The clues read [Sneak a peek], [Manicurist’s tool?], [Serena’s sister] and [Conductor’s coworker?]. Very clever, if not for the initial shock value of thinking your file is corrupted or your computer has a virus! Nice way to end the Jonesin’ year! still in countdown mode to puzzle #1000; this is puzzle #969, so sometime this summer! 4.5 stars for this one. 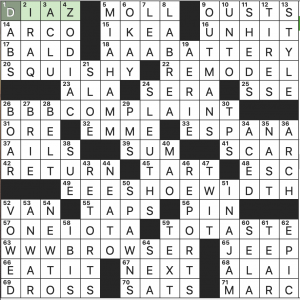 This was a fun puzzle, but I thought the theme was going somewhere other than where it did. First, here are the theme answers:

Everyone have a great holiday and a great rest of this week! 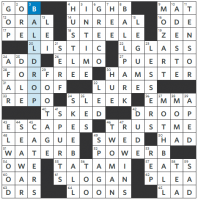 Each of the four theme entries drops at the word BALL in one of the downs and then turns back to finish in an across entry that is simply clued as [CLUED ELSEWHERE]. Wow! What a fantastic puzzle that is so smoothly executed – there were no dregs in this puzzle, which is tough to pull off in a grid this packed with theme! Maybe SEAWAR was my only small issue? I am incredibly jealous that I didn’t come up with / execute this puzzle – super kudos to the constructor.

Other random thoughts:
– I enjoyed the MAT / TATAMI pairing and felt the GOP / REP pairing was fair.
– [Lord’s lackey] for SERF is … quite generous to the lords.
– Is EMMA literally the only woman in this entire puzzle? So many dudes all over this puzzle and only EMMA for the women. If I had any major ding against this puzzle, that’d be it. Here’s hoping for more inclusion in 2020 – if you can’t fit women in the grid itself, don’t forget that you can always be much more inclusive in the cluing!

Nothing very New-Yearsy going on here, unless of course we’re looking to “jump start” 2020!

THEME: Phrases where the first word is a synonym for “jump.” 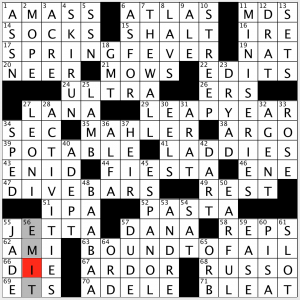 Sure! This works. Though SPRINGing, LEAPing, and BOUNDing seem like a different way of jumping than DIVing. And BOUND TO FAIL is an outlier grammatically (the others are noun phrases).

Fave fill included MINI-SERIES, SKI RUN, and EARFUL. I also really like the clues for ANDRE [Name hidden in “Italian dressing”] and DIE [A side of one looks like [: :]]. Clever!

DANA Point was new for me [Orange County’s ___ Point]. I live in Orange County, NY, where West Point is familiar. For a moment, I was excited that our county was getting crossword attention! Nope. It’s always California!

Enjoy your festivities! And your bottles of ROSÉ!