Hello F(r)iends and welcome to the last post of 2019. Joon is visiting with family, so it is I, Laura — and a few ringers — here to ring out the old year with Mr. Gaffney and all of you. This week our answer is a six-letter word. 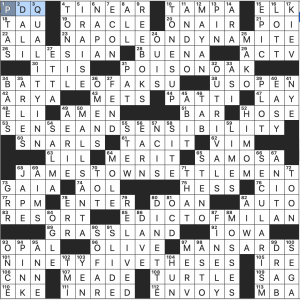 First observation: Each of the themers can be associated with a specific year in history:

Third observation: I’ve been staring at this long enough; it’s time to call for backup. I started a google doc and invited my group-solve fam to join me. Thus ensued much communal misery and gnashing of teeth. Well, from two of us — turned out, some folks went off on their own and solved the damn thing all by their lonesomes, likely so they could check that final “Solo Solve” button of the year with impunity. That left Jesse and I to flail frustratingly for a full afternoon. What rabbit holes did we tunnel?

Rabbit hole 1: The years point to the letters in their numbered squares.

OTEKTABLEQPEK = we’re probably on the wrong path. (No! It must be an OTEK TABLE QPEK! That’s where, uh, Klingons serve their traditional feasts of …. Never mind.)

Rabbit holes 4 – 12: Roman numerals? Geography? Famous people associated with the answers who were conspicuously left out of the clues? Addition? Subtraction? Uglification? Derision? (SPOILER: You see where this is going, right?)

This seemed promising — and it gave us six letters — but we just couldn’t … see anything there.

Final rabbit hole, after which I gave up to go out for dinner and drinks:

“What if the dates are only to order the things and not significant themselves? Why need a 20×20 grid? To fit all the themers? Other stuff? NE corner is terrible — could be better as ELL/LIES instead of ELK/KIEV” [verbatim quote from our notes]

The next morning, our friends had taken pity and left a few clues. I awoke bleary-eyed to drink some coffee and checked my messages to find that Jesse had had a flash of insight in the place where it happens: the shower.

“The grid is 20×20 and next year is 2020. Hm, TWENTY is a six-letter word, but that’s too obvious. Wait, VISION is also a six-letter word that often follows 20 20. And that would fit really well with the title ‘SEE YOU NEXT YEAR!’” [not a verbatim quote from our notes but an imaginative reconstruction of Jesse’s thoughts in the shower]

It turns out that if you map the letters onto the grid at those coordinates, and follow them in grid order (not clue order or chronological order as we had above), you get the answer:

Which is a six-letter word and our answer. And with some … 20/20 hindsight, it all seems very clear.

Excellent job, Matt, and thank you for another fine year of puzzles.