Happy New Year to all in crossword-dom! May your 2020 be bursting with clever themes, sparkly fill, and satisfying solve times.

Note there is no WSJ puzzle due to the holiday. 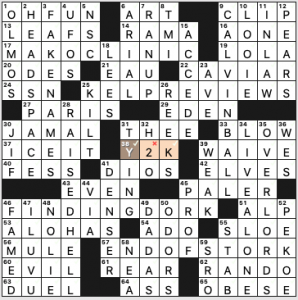 After I filled in the first theme entry and saw that phrases with a Y had that letter changed to a K, all I could think of for a theme revealer was KY JELLY. But no, it’s not that, it’s 38a. [Big scare of a couple of decades ago … or a phonetic hint to this puzzle’s theme], Y2K, as the Y is changed to (“2”) K. Remember the Y2K thing? If you’re under 27, I’m sure you don’t.

I didn’t need three NYT New Year’s–related themes in four days, but it’s not the constructors’ fault that others were scheduled so close together. At least this one isn’t about resolutions!

Wasn’t digging some of the iffier phrasal entries: “OH, FUN,” ICE IT, I LUV U. Did enjoy HEADSPACE, RAISED HELL, classic CALVINBALL, and unwanted OVERLORDS. Also appreciated 30a. [Late Saudi journalist Khashoggi], JAMAL, for helping to keep his name alive. There was a bullshit trial in Saudi Arabia recently, and of course those actually responsible for the murder weren’t charged.

Favorite newer word: 62a. [Unidentified person, in slang], RANDO. It’s absolutely a word that people are using! Dictionaries will catch up soon enough.

Four stars from me. Happy New Year to you!

THEME: Ringing in the new year with some 2020 grid art 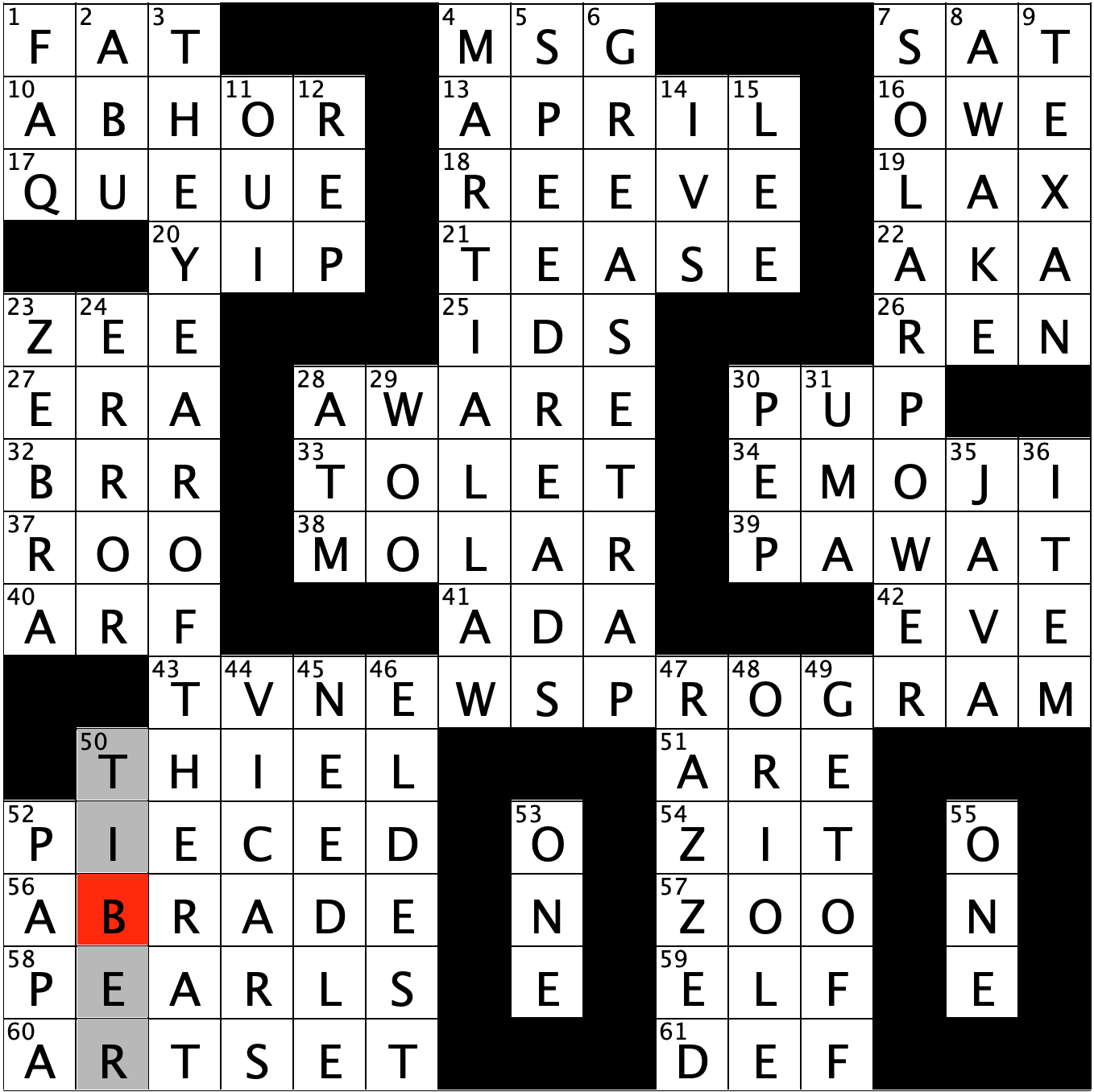 Happy New Year! Fantastic celebratory grid today to bring us into 2020. This solved a lot like a themeless with the grid art the main attraction of the theme, and the theme answers an added perk.

Loved a lot of the fill here too – long answers like SOLAR POWER, SPEED READS, and GREASE TRAP balanced out the broken up nature of the grid. All letters are also accounted for here – including an impressive 3 Zs.

Here’s to more puzzles in the new year! 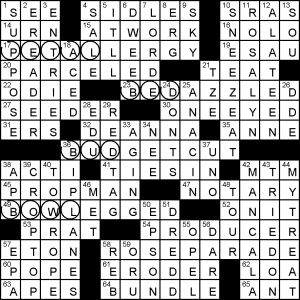 Today’s puzzle features an unusual wrinkle on an otherwise familiar theme. Today in greater Los Angeles is the ROSEPARADE and that is used to indicate that four other long across begin with letters that satisfy “ROSE ___”. I say letters, because the thematic is either longer than the first word or part of it. BEDAZZLED is merely the a one-word answer as well. The first three answers are general ROSE phrases, but the last is ROSE_BOWL, which is partly the setting of the ROSEPARADE. Bonus or duplication? You can decide.

Trickiest entries: Unconventionally spelt ROSALYN, [Calvin’s babysitter in “Calvin and Hobbes”] a secondary character; [Stallone title role], DREDD – since we all wanted RAMBO or ROCKY to fit; [Hoops stat.], REB, which I’m guessing is a shortening of “rebound”? 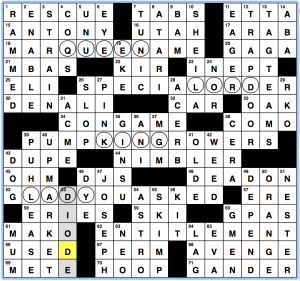 Happy New Year!  Let’s start the new year right by solving this week’s AVC puzzle, a guest puzzle from Enrique Henestroza Anguiano (who’s making an AVCX debut – congrats, Enrique!).  This got a 2.5/5 on the difficulty scale, which seems about right.

Two sets of titles (KING and QUEEN, LORD and LADY), placed in the circled squares.  This was a nice, easy start to the year – I look forward to what else the AVCX has in store.

SHEILA E sang the final version, but Prince wrote this one originally.