I don’t remember who pointed out that the Fireball has published exclusively male constructors for the past few years – except for the last puzzle of 2019, which was co-constructed by Andrea Carla Michaels. My apologies, Andrea, for forgetting that wonderful puzzle, and thanks to David Glaser for pointing it out in the comments. I suspect it was Erik who called this out, but I can’t find the comment/post/Tweet/whatever. Anyway, I went back through the Fireball reviews in our archives and found a Kelsey Blakely puzzle from June of 2016. I don’t know Kelsey. A Google search suggests she’s female-presenting. If we take that at face (!) value, it’s been 3.5 years since Peter has published a crossword solely by a woman. Since there are about 45 Fireball puzzles a year, that’s nearly 160 puzzles. I’m horrified by that number, and horrified that I didn’t notice until it was pointed out to me. Let’s see if that changes in 2020. I’m not holding my breath.

On to the puzzle. It took me a while to sort out what was going on. I knew there were rebus squares because 7d, [Nelson Mandela’s native language] has to be XHOSA, and there were only four letters. It turns (!) out that the rebus squares make the four theme entries read left-to-right with the first letters in the rebus squares and then right-to-left with the second letters. They do a “one-eighty,” hence the title. 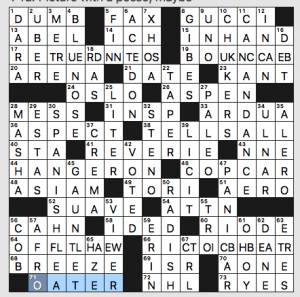 I really liked this theme. It was fun to solve and gave me an satisfying “aha” moment. There’s a lot of music in this puzzle – the constructor is a musician – and two of the music clues provide rebus squares for theme entries. I suspect that will create problems for some solvers. I knew that [Moulin Rouge performance] was CA{NC} AN DANCE} and was able to figure out that [Instrumental hit of 1966] was SPANISH {FL}EA by backfilling from OFF THE WALL.

What I didn’t know before I did this puzzle: that “seitsemän” means seven in FINNish, that the ASPEN is called the “asbestos tree” because it’s resistant to burning, and see above re: SPANISH FLEA. I’ve heard that song, though, and so have you.

{it’s the “Bachelor’s Theme” from “The Dating Game.” You’re welcome.}

The title led me to believe we would have yet another puzzle based on board games, but it’s the beginning of January, so the games in question aren’t board games, but Bowl Games. 19d is BOWLS OVER clued as [Leaves flabbergasted, and a hint to the circled letters]. This is our indication that we should be looking for the names of Bowl Games going upward in the circled squares. 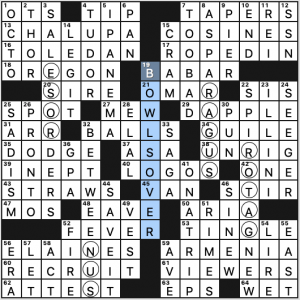 Too bad my team’s bowl game wasn’t included backwards in the grid. That would be Notre Dame in The Camping World Bowl. If you think that’s a silly name for a bowl game (it is), get a load of this list which includes The Popeyes Bahamas Bowl, The Duck Commander Independence Bowl, and The Bad Boy Mowers Gasparilla Bowl. C’mon, Shenk! Quit resting on your laurels and put some these in a grid!

Not a bad theme, though. And the rest of the grid is solid, as you’d expect, though not necessarily sparkly. I liked seeing CHALUPA, ARMENIA, PRONTO, and “SAVE IT!” 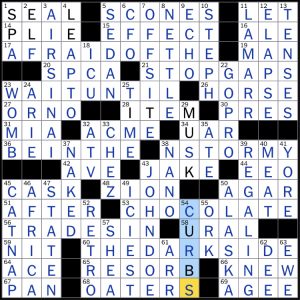 I had the weirdest sense of deja vu from this Thursday’s NYT, and a quick Google search couldn’t resolve why.  I feel like I’ve seen the exact same style of theme before, but can’t place where.

I’ve definitely seen this genre of theme (black square representing “black” or “dark” or “hole”, etc.) before, but the answer set here is pretty solid.  Each set of answers has a DARK square in between them – AFRAID OF THE [DARK] MAN, WAIT UNTIL [DARK] HORSE, BE IN THE [DARK] ‘N’ STORMY, and AFTER [DARK] CHOCOLATE

Less fond of: OR NO, JAKE clued as “A-O.K.” (is this common use?), RESORB (which constantly looked wrong to me)

THEME: Animals whose names suggest they are of another species

When I got to GUINEA PIG, I had the feeling that I’d seen this theme recently. Sure enough! A very similar idea was in the NYT on a Sunday exactly one month ago. However, I like this one better because it sticks with animals and avoids a mansplainy vibe.

The revealer feels like it’s missing something… like the word “altogether” or something at the end. DIFFERENT ANIMAL doesn’t strike me as a stand-alone with just those two words. I wish there were another 15 letter animal that could’ve been used in its place. The revealer is unnecessary as the title is doing its due diligence. 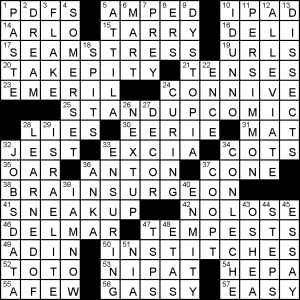 Today features a clever and unique, if somewhat strained theme idea. Three different occupations that are stitch-related. Only the STANDUPCOMEDIAN is directly related to INSTITCHES. Leaving garments or patients INSTITCHES sounds odd. Also why specifically a BRAINSURGEON. All of my sterilisations today, my bite wound and my toe amputation were all “left in stitches” yet I am no brain surgeon. Regardless, it’s a fun bit of word play to tie the theme together.

I liked the idea of those two big corners. I’m not sure we got the most out of them, with only PERSIMMON, ISRAELITE and perhaps JOBSDATA as interesting answers out of the stacks.

EXCIA is truly a cheap answer. No, the X does not mean the answer is any less contrived than any other EX[JOB] answer, though it still better than EX[TEAM], which is next level bullshit.

Interesting to note: [Singer between Melanie and Joan at Woodstock] is ARLO. I first had JIMI, another four letter first name, but of course he is famous for finishing the concert. 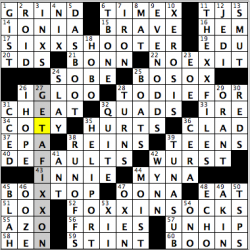 Happy New Year, everyone! I hope you are all doing well and rang in the 2020 in style! While I am not able to commit to a New Year’s resolution to provide a review of BEQ puzzles every single Thursday in 2020, I’ll definitely try my best to do just that. As of right now, we’re 1-for-1! (I had thought I had posted this much, much earlier, but, apparently, the Internet conked out as I published this and didn’t notice. Sorry, friends!)

Today’s puzzle was definitely X-rated, with phrases turned into puns by their clues and by the fact that an extra “X” is added right next to the one “x” contained in the original phrase to create the Roman numeral 20 inside of the entries.

Though the theme was straightforward, figuring out a couple of the origins where the puns came from might have been real tough, especially if you were never made aware of the English indie band The xx nor famed runner and author Jim Fixx. (I guess that would also be true if one was not up on Dr. Seuss book titles as well.) Knowing The X-Files helped me out tremendously because, for some reason, I was not aware that TJS was a legitimate abbreviation for Trader Joe’s (11D: [Grocery store chain whose employees wear Hawaiian shirts, for short]).  Did however realize that “Butler” in the clue to EDU was in reference to Butler University in Indianapolis (19A: [Butler’s address part?]). Don’t know why I initially entered in “Platoon” instead of DAS BOOT when reading the clue, but quickly remedied that (5D: [1981 movie set on a submarine]).  At the end of the day, this was definitely far from a BLAH puzzle which presented a little bit of a challenge (45D: [Like undelectable cake]).

“Sports will make you smarter” moment of the day: IGLOO (40A: [“Ask me in a bit]) – From 1967 until 2010, the Pittsburgh Penguins called the Pittsburgh Civic Arena (renamed Mellon Arena) home, nicknamed The IGLOO because of its domed shape as much as it was because the team that were the main tenants were nicknamed the Penguins. The arena saw the birth of a borderline NHL dynasty, when the Penguins won back-to-back Stanley Cups in 1991 and 1992. For you music fans, The Doors’ “Live in Pittsburgh 1970” album was recorded in The Igloo. Here is the arena, since demolished, in all its domed glory. 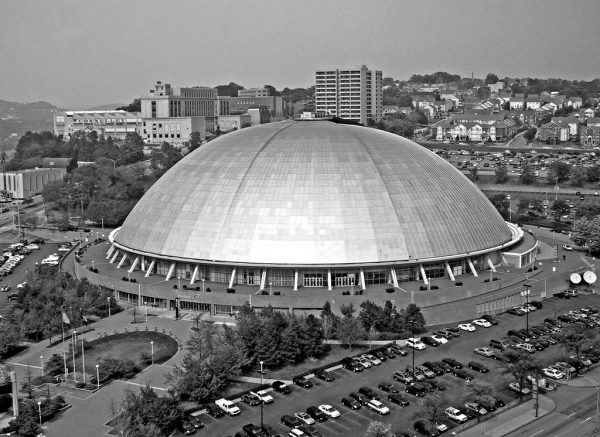