According to Deb Amlen’s Wordplay column, Tess and Kathy are mother and daughter, and this is their debut. I enjoyed this theme, which has a number of layers. I didn’t really care about the circles. The rest was fun.

We have five theme answers clued as months. For some reason the months are shouting at us. 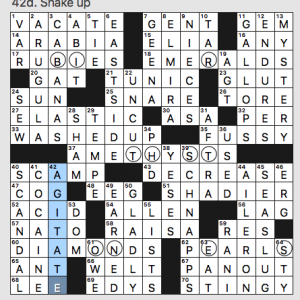 What I didn’t know before I did this puzzle: most of the birthstones. I was born in July, so I knew that one.

Nice work, Tess and Kathy! I look forward to seeing more from you, either separately or together.

THEME: Water drops have fallen off the sides of the grid as the start or end of themed answers 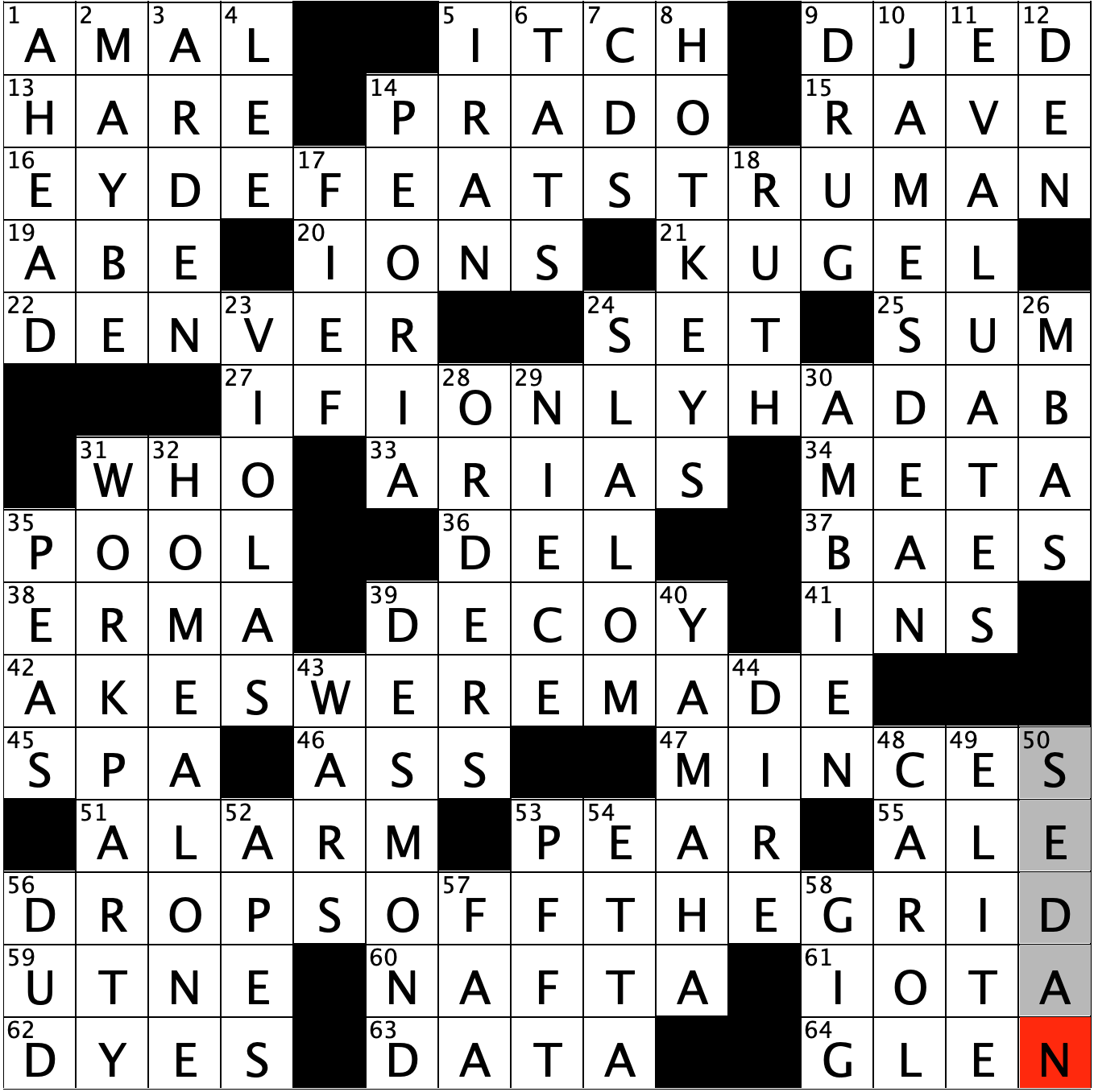 Once I figured out what was going on, I loved this puzzle. As a Wizard of Oz fanatic, IF I ONLY HAD A BRAIN was the first theme answer that I got, which helped a lot. Really perfect use of the phrase DROPS OFF THE GRID and solid choices for all of the theme answers made for a really enjoyable solve all around.

Interesting grid design also allowed for some enjoyable bonuses. HOME ALONE, WORK PARTY, and HOT KEYS were my favorites, but really every part of the puzzle had something that made it exciting to solve and interesting to work through.

The apt title is a good indication of today’s synonym theme. The first word in each entry is a synonym for “fast.” 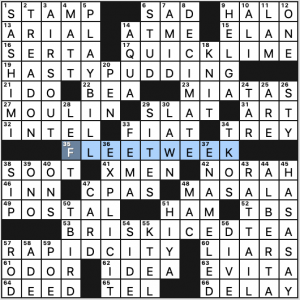 The rest of the grid is solidly filled though none too sparkly. Top hits for me: SASHIMI, RAT TAIL, PLAYBILL, EXPLICIT, and MASALA. Did you know that one of the favourite dishes in Britain (by most measures) is Chicken Tikka Masala? Although, as with many popular foods, there is some argument is to its origin.

Let’s see. What else? Not much except to say I’m impressed with those NW and SE corners with stacks of sevens and all clean crossings. Well done.

A fast and breezy start to the week. 3.8 stars.

This felt very hard, but my time was only slightly higher than average for a Monday New Yorker, so I’m not sure exactly how to rate the difficulty. I do know how to rate the quality of the puzzle though: so many stars! 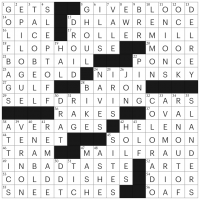 There’s some unusual segmentation happening around the middle, where the marquee 15-er is SELF-DRIVING CARS (“They’re beyond your control”). (Sidebar: Is this true? I thought most SELF-DRIVING CARS had, like, emergency controls that a passenger could employ if necessary? I have never ridden in a SELF-DRIVING CAR, and I think if they are *truly* beyond your control, then I may not be brave enough to try it anytime soon). Anyways, back to that segmentation! The black squares pretty neatly divide into wide-open corners in the NW, NE, SW, SE, with fewer connections across than you might normally expect. This allows for lots of medium-to-long entries stacked all over the place, including some impressive vertical 4-stacks of 8s in the NW and SE. The triple stacks in the other two corners are also excellent, with IN BAD TASTE/COLD DISHES/SNEETCHES taking the win for best stack. 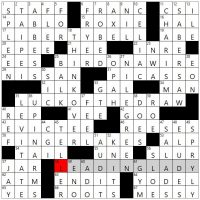 17A: LIBERTY BELL [American independence symbol with a storied crack]
25A: BIRD ON A WIRE [1990 Gibson/Hawn film]
35A: LUCK OF THE DRAW [Pure chance in poker and lotteries]
50A: FINGER LAKES [Group of narrow bodies of water in upstate New York]
58A: LEADING LADY [Female box office star, and what the starts of the answers to starred clues can have]

Nice! The first word of each theme entry can have the word “lady” in front of it: Lady Liberty, Ladybird, Lady Luck, and ladyfingers. You know that I’m always going on about featuring women in puzzles more regularly / prominently, so this was nice to see. (Now if only they’d pay a LEADING LADY as much as they do male box office stars…)

Other random thoughts:
– In addition to the theme, the grid includes women like [“Chicago” showgirl] ROXIE, ABBESS, and DOES. But that’s it. So, for as much as I appreciate the women-centric theme, I’d have loved to see actual women represented throughout the puzzle, if even in updated cluing for this same grid. As for men in the grid, we have PABLO / PICASSO, HAL, ABE Lincoln, MAN, REESES, Oscar Madison, NWA, bucks, JAY Leno, and Brian ENO.
– Loved seeing NWA and appreciated the “I’m going to work out” New Year’s resolution mini-theme (REP, GYM, SALADS). OPAH didn’t excite me, but the grid was otherwise smooth.
– I was really happy to see the gender-neutral cluing for END IT: [Break up with a partner]. Loved that bit of inclusivity!