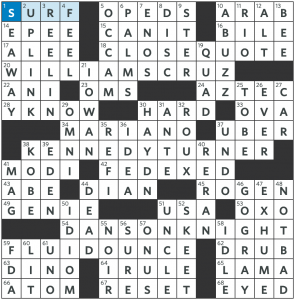 This week, what if I were to tell you that Matt is challenging us to find a series you can find on YouTube? There are a couple of noticeable themers:

First observation: These are the last names of six guys whose first name is Ted. Second observation: The clues are quotations, so the Ted guys are talking. Third observation: I solved the puzzle. The series you can find on YouTube is TED TALKS.

If you’re unfamiliar with TED Talks, they’re series that captures short lectures from the annual TED Conference; TED is an acronym for “Technology, Entertainment, and Design.” The conference has been going on for about 30 years and while it has had some cultural influence, the aesthetic of many of the lectures has become synonymous with a sort of tech-bro glibness. There are also separate TED conferences for women and for the youths. An offshoot of TED called TEDx, which is open to anyone who wants to use the TED name with the caveat that they have to prominently state that they are not affiliated with the official TED conference. Crossword Fiend’s own Jenni Levy, who is a palliative care physician, gave a talk on making end-of-life decisions for her local TEDx conference. David Kwong gave a TED talk a few years ago on the connection between crosswords and magic tricks. Maybe you know someone who has given a TED or TEDx talk.

The TED talk style has provoked many, many parodies, to the extent that the TED organization has an article on speaking tips for TED talks that you can learn from the parodies. The best parody IMHO is from John Oliver’s Last Week Tonight: