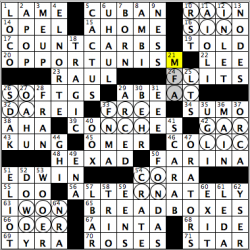 Welcome to the first Tuesday of 2020! Here is hoping you’re doing very well to begin the new decade!

Let’s break bread while talking about this puzzle, shall we? Today’s grid features seven areas of the puzzle where circles are stacked on top of each other, with the letters ending up spelling out a type of bread when read from the top row of the circles to the bottom row. The reveal, BREAD BOXES, lets us in on why the circles are stacked the way they are (65A: [Puzzle theme depicted by seven grid “containers”]).

The intersection of FNMA (33D: [Low-cost home loan org.]) and OMER has me twisted in knots for a bit before I ran the alphabet and, when thinking about the “M,” finally realizing that I had been the latter (omer) in a few grids in the past (45A: [Biblical grain measure]). Though very dated, seeing DOWDY was a nice sight, if only to remind me that that was indeed a word that was more common many moons ago (52D: [Not chic at all]). Speaking of entries to appreciate, the paralleling answers of OPPORTUNISM (20A: [Making the most of current circumstances]) and ALTERNATELY was a thing of beauty. This probably sounds real stupid, but I never ate FARINA, although it was in my house a few times when I was growing up, because I used to be creeped out by the smiling/grinning/whatever-look-that-is countenance of the boy that was on the front of the box (50A: [Oatmeal’s kin]). I guess the face on the Quaker Oats container wasn’t all that more appealing, but enough for me to prefer that much more! Ah, the things you never forget from childhood!

“Sports will make you smarter” moment of the day: CUBAN (5A [Popular cigar variety]) – We first met each other in 2001, when he was a guest presenter on a television game show I appeared on, and we remain friends to this day, even though he’s busy being one of the stars of Shark Tank. Mark CUBAN is the owner of the Dallas Mavericks NBA team, a title he has held since buying a majority stake in the team from Ross Perot Jr. back in 2000. Though much more mild mannered, Cuban used to be a very omnipresent and boisterous figure in the front row of most Mavericks games when he took over the team, and his outspoken nature helped him to incur fines levied by the NBA over the years to the tune of over $1.7 million. Cuban oversaw the 2011 Dallas Mavericks team that ended up winning its one NBA championship. Now after writing about him, it’s time to shoot him an email once more! Hope he responds quickly…well, I hope he responds, period! 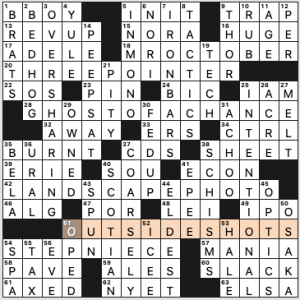 The theme took me a few moments to understand. The revealer is 51a. [What 20-, 28- and 42-Across are], OUTSIDE SHOTS. Here’s how it relates to those answers:

I did notice a couple dupes while solving: REV UP and FED UP, I AM and NOR I.

Some of the fill felt a little tough for any Tuesday newbies out there—URAL, SOU, the unnatural phrasing of PEEPS AT and IN MONO. 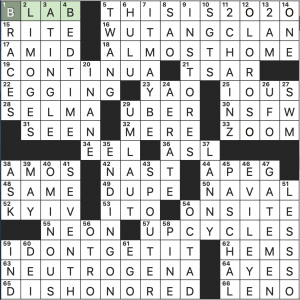 This is a themeless puzzle, but it has quite the timely answer at 5A:

In the grid, the zeroes actually work as the letter O, but the 2s are clearly clued, with rapper 2 CHAINZ getting some recognition in a puzzle! I’m not sure this is heard “a lot,” but so far I haven’t written 2019 as the date yet! (OK, maybe once!) Very nicely done, and also quite timely as mentioned. Only 30 away from 1,000! 4.5 stars today.

See you next week with another Jonesin! 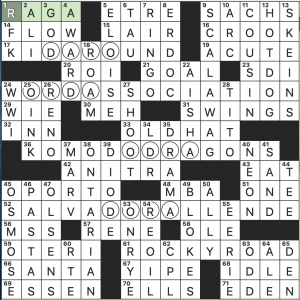 We have some circles in this Tuesday’s puzzle, with final theme answer as the revealer:

Cleanly done. Not too fancy, yet a little humor there at the end. Also, it makes me want some ice cream, although Rocky Road is not one of my favorite flavors. But it is too cold outside, and I am on a diet, so bring on more salads! And more puzzles, of course! 4.3 stars today.

THEME: Characters from the comic “Baby Blues” are hidden across answers.

I’m starting to appreciate this puzzle more now that I’m writing about it. During the initial solve I didn’t notice that Wanda (the mom in the comic) appears to be “chasing” the kids around the grid in a clockwise fashion. Now it makes sense as to why two of the names need to appear backwards. It also explains Darryl’s absence as only one parent needs to be chasing all the kids. I also noticed that it’s the 30th anniversary of the cartoon- which I hadn’t noticed before since I didn’t comprehend the whole clue- so that’s a nice touch.

However, this one really wasn’t for me. I have never read the comic being honored here and had no clue of any of its characters. I had to consult Wikipedia to figure out what was going on. Also, is it safe to assume the Across Lite version employed circled letters? I can’t access it, and I found reading the instructions on the regular web version very annoying. From experience of watching new solvers, I know that instructions such as (first letter + last 3 of 3-Down, backward) is a major turn off.

I simply do not understand why Universal runs so many circle dependent themes when they don’t have the futuristic technology needed to put circles in a crossword.