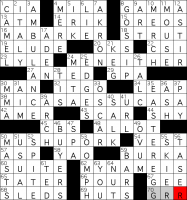 hello and welcome to episode #605 of matt gaffney’s weekly crossword contest, “Mystery Movie”. first of all, happy new year! secondly, thanks to laura for filling in for me here last week while i was on vacation. happy to be back in the saddle for the first mgwcc of 2020, which i attempted (unsuccessfully) to solve without the instructions. what are the theme answers? it looks like a standard vowel-progression theme, with a missing entry:

so it’s pretty clear that the MO entry is missing, and based on the title, i assumed it was going to be a movie title. unfortunately for me, that didn’t help me figure out the answer, because i couldn’t think of any movies with the word “mo” in the title. so i did peek at the instructions, which informed me that i was looking for a Spike Lee movie that should be in this grid, but isn’t. well, at least i had something to google, so i googled a list of spike lee titles and found mo’ better blues (1990). while it was not a totally unfamiliar title to me, i don’t think i could have pulled it without the instructions even if i’d spent days and days trying to think of it, as it’s a film i certainly haven’t seen and probably haven’t even thought or heard about in the last quarter-century or so.

with the instructions, of course, the meta is very easy—certainly easy enough for a week 1—although, like with miller’s crossing a little while back, i wish it had been a little mo’ famous. or perhaps it is, and it’s my own deficiency that i didn’t have that title in my head; i watch very few movies, and though i try to at least have some familiarity with the titles of culturally relevant films, 1990 is maybe a little too far back for me.