Fun theme in which phrases of the form “___ FOR ___” are re-imagined literally. 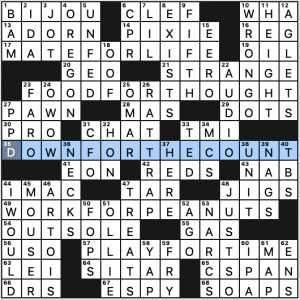 Like I said, a fun theme. I love a good re-purposed phrase, and this theme delivered the humor. Nicely done!

Clean and fun fill, too. I liked seeing RAT TRAP, “JUST SO,” STRANGE, PIXIE, and Boring, OREGON. Nice start at 1a with BIJOU as well, and the OOF and OW OW one-two.

Not keen on stale crosswordese AGLETS and EERO Saarinen, but at least they were gimmes, allowing me to brush right past them. 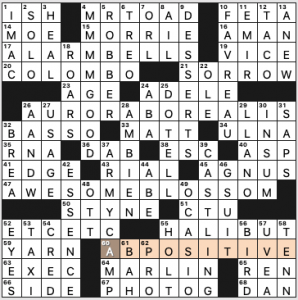 I must be missing an angle in the theme. The revealer is 60a. [What’s an uncommon blood type … or a hint to this puzzle’s theme], AB POSITIVE, and the three themers have A.B. initials. I don’t get where the POSITIVE comes into it, because only one of the six words in those themers is overtly a positive one:

So what am I failing to see here?

I’ll withhold a star rating since I think there’s a theme level I haven’t grasped. 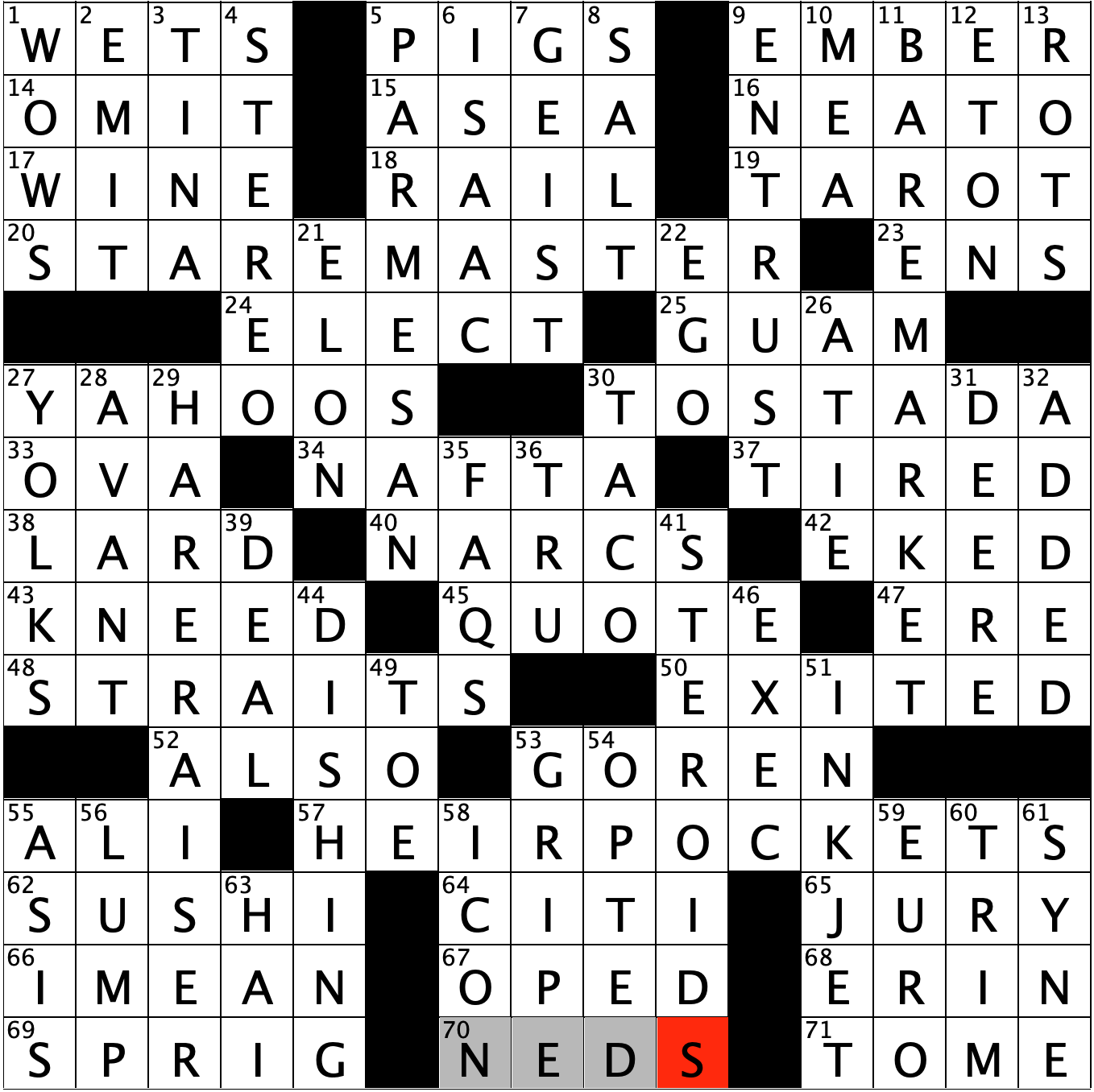 Quick write-up today. Clever theme answers here with each one enjoyable and a full set with all of the homophones rhyming. BARE MARKET was my favorite of the bunch with HARE RAISER a close second.

Some tricky parts for me towards the bottom of the puzzle, but overall smooth – any tricky answer was crossed fairly and the grid had a nice flow to it. 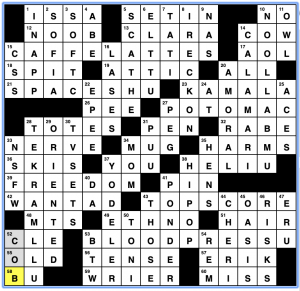 Happy Wednesday! Nate Cardin has this week’s AVCX puzzle – if you haven’t already picked up Queer Qrosswords 2 or followed his French bulldog Eero on Instagram, I suggest you fix that post-haste – both will brighten your day.

This week’s puzzle is a 4.5/5, but it was enough in my wheelhouse that it didn’t feel quite that difficult.  There’s some funny-business in the grid, though – multiple down entries were clued with “-“, which suggested something happening in the across entries that intersected with these:

Reading “YOU UP” phonetically as “U UP” and taking that as a direction to keep entering each of the affected answers up was the key to finishing this grid.

Since the grid specified Wham’s FREEDOM, here’s that instead of George Michael’s later “Freedom ’90”

I liked the construction here – this was a clever theme, and though I was initially confused by the inclusion of 2-letter entries (typically a no-go in a grid), the integration of this into the theme meant I didn’t mind their inclusion.  I also liked the consistent way of hinting at the “rise” across the theme clues.

Also nice in terms of fill inclusion: ISSA Rae, KAMALA Harris, WRIER (which I always want to spell with a Y), TATI Westbrook (who I recognized from being vaguely aware of her whole drama with fellow makeup Youtuber James Charles last year), and TONIs Morrison and Collette (the latter of which is fantastic in Knives Out). 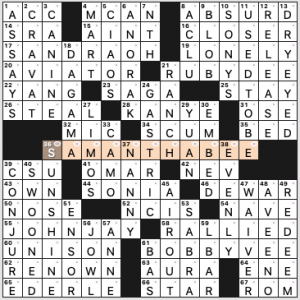 Gareth’s without electricity (it’s time for the “load-shedding” they do in South Africa), so I’m filling in on this one. Robin’s theme is famous people whose last names double as the English names of letters in the alphabet:

Straightforward and simple. It’s nice that 60% of the themers are women and 40% are people of color. Representation matters.

The grid’s got more open swaths than you see in most mid-week puzzles. That accommodates some cool stuff like CONJURE, SWOONED, and SUNSHINE, but there are also overly dry bits like OSE, CSU, L-BAR, SRA, and NAVE.