It’s great to see an offering from Tracy Gray in the WSJ, and it’s a pleasantly tricky one, no less. 53a is clued [Beachgoer’s protection, and a literal hint to four squares in this puzzle], and is answered by BLOCK. But really, the “block” (in other words, the black square) preceding that entry is a hidden rebus for the word SUN. We will find the same circumstance in three other squares in the grid. 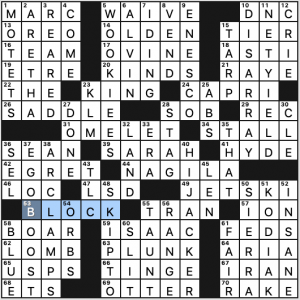 Of course, it took me a while to get a foothold since there seemed to be a whole lot wrong in that NW corner. When I left it alone and came upon CAPRI with its missing SUN that’s when I knew something was up.

It’s a nice touch that in each entry that is really two entries, the one after the SUN BLOCK is still a valid crossword entry. This helps disguise what’s going on and adds to the trickery.

I love this theme and its execution. It’s definitely one of those “why didn’t I think of that?” themes.

As you’d expect, the fill is strong with entries like WOOKIEES and HIJACKER (I guess enough time has passed). ENESCO feels like stale crosswordese, but EGO BOOST, JETSKI, and KODIAK are fun. 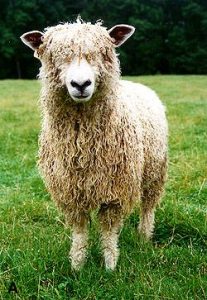 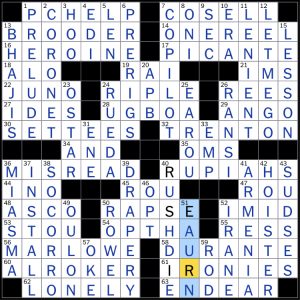 It’s another Alex Eaton-Salners Thursday NYT! It’s felt like he’s had a bunch lately – grids of a slightly trickier sort with a twist (like this one) seem to be his niche. This one has a LOT of theme stuff going on.

I kept running into errors while filling in the grid, since I kept using rebus squares to enter a bunch of Ts, but couldn’t figure out why the crossings looked so messy. Then I realized I had four big Ts staring at me in the grid. These take the place of the actual Ts in most (but not all) of the answers.

Here’s a big list of all the across entries making use of these T’s: A LOT, TRAIT, TIMS, JUNOT, TRIPLET, TREES, ID EST, TUGBOAT, TANGO, IN OT, TROUT, TROU, ASCOT, TRAPSET, TIMID, STOUT, TOP THAT, TRESS

Would no Ts in the grid other than the four big black square Ts have been a cool idea? Yes.

Would the fill needed to support that have been horrible? Also yes. I’ll take this a hundred times over even the notion of that hypothetical grid.

My one nit to pick here: The capital of Albania is TIRANA, not TIRANE!  I just got done watching Albania’s national music festival a few weeks ago.  It’s definitely TIRANA.  They mentioned TIRANA a bunch.

The grid starts off with some squares filled in. 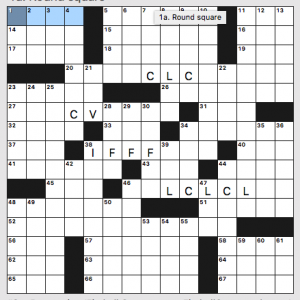 This is odd. I started to solve without no idea what I would do with those squares. I figured they were part of the theme answers. I tried using them as rebus squares. That made no sense. Finally I just replaced them with the correct letters. 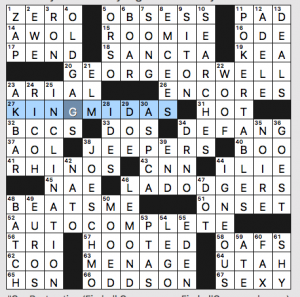 So the letters become makes of cars, which matches the title. And, sure enough, there’s a revealer: 52a, [Browser tool appropriate for the letters already in the grid] which is AUTO COMPLETE. This is the part that doesn’t make sense to me. The letters in the grid don’t complete the name of a car; they are changed into the name of a car. Wouldn’t that be AUTO CORRECT? I was so sure of that answer that I entered it into the grid and of course it didn’t work. So enlighten me. What am I missing? Is there some significance to the replaced strings of letters?

What I didn’t know before I did this puzzle: that Dionysus gave KING MIDAS his golden touch. 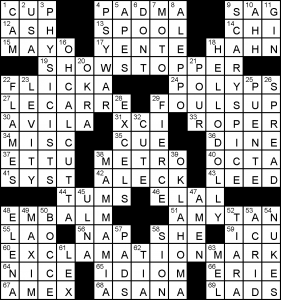 Thank you for our queer dean Amy for helping me out due to poor planning yesterday.

Today’s puzzle is extra tall, and features a very busy list theme with a two-part revealer, as well as left-right symmetry. The list is plays with an EXCLAMATIONMARK at the end, making that mark a SHOWSTOPPER. It’s a clever piece of word play, though it does make for a rather crowded theme. The four plays selected are OHCALCUTTA, MAMMAMIA, OKLAHOMA and HELLODOLLY. I wonder if anyone will ever make a SCARYSPICE! Broadway revue? It has more oomph than PHYSICISTS! at least.

The grid’s crowded nature has some rough-around-the-edges spots. PADMA crossing a tough MOTO clue may fox some. AVILA and SION are also handy names to keep in your crossword-solving back pocket. With all that, I’m surprised XCI wasn’t edited out of the grid. That’s one area where there is not that much going on, so a RRN seems a touch odd. 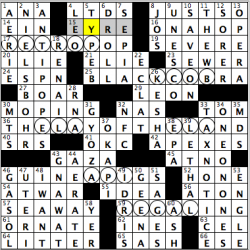 After doing that puzzle, one might need to have a beer or two to relax! Fortunately, BEQ is ready to serve you some cold ones for you to imbibe. There are five theme entries that all contain at least one grouping of circles and, when spelled out, are all types of beer…but spelled backwards!

The crossings definitely helped me out in solving GYOZA, as I was at a complete loss after inserting the “Z” in GAZA (43A: [Strip of the Mediterranean]) and trying to figure out the name of the specific delicacy (31D: [Japanese dumplings]). This might be a case of trying food that I officially first come across via solving a crossword. Outside of gyoza, no real hang-ups when solving today. Rare sighting to see the full name of NIELS BOHR in the grid, but that was a nice touch to add (2D: [Danish quantum theory physicist]). Major props for the clue to NAS, as I’ve listened to the song mentioned in the clue countless of times — the song came out before Nas became big as a solo artist — and always marveled at one of the must underrated hip hop groups of all time, Main Source (32A: [“Live at the Barbecue” rapper]).  I would leave you with the song embedded below, but I’m using a shared computer at the moment that won’t play YouTube clips nor let me access the embed code. It’s like that, y’all..(That last line is also the refrain/chorus in “Live at the Barbecue,” by the way.)

“Sports will make you smarter” moment of the day: ASH (60D: [Brick oven residue]) – No woman had a better 2019 in tennis than Australia’s Ashleigh “Ash” Barty, who won her first grand slam singles title at Roland Garros in the spring and then capped off her year by winning the championship at the WTA Tour Finals event in Shenzen, China. And to think, just six years ago, Ash quit the sport of tennis to become a professional cricketer. In 2014, after a stellar junior career which saw her win the girls’ singles title in 2011 and, while a professional, reach three grand slam finals events in doubles, she left the sport and became a cricket player in the top women’s cricket league in Australia. Barty came back to tennis in 2016 and has shot up the women’s rankings since, and her win at the French Open saw her lose only two sets in those seven matches.