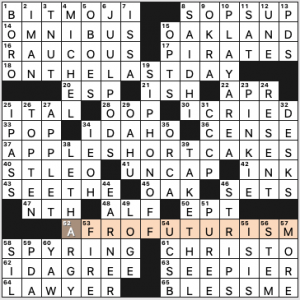 Hey, it’s Brendan in the NYT again! Feel like it’s been awhile. The “here comes BEQ, working on debuting splashy new fill” vibe features BITMOJI, AFROFUTURISM (a term I first learned from the always-erudite Erik Agard), JUUL PODS, and TAKE THE L (meaning “loss”—but Chicagoans often take the L without feeling like losers). They’re all good fill, though I deplore the whole “let’s get young people who think smoking is gross hooked on nicotine even worse” aspect of Juul and vaping.

Toughest zone for me was the southwest corner, where I tried WE AGREE for I’D AGREE; the SPY RING clue, [Term for a group of moles], was tough; the LAWYER clue, [One who goes through the motions?], was also hard; [Smack on the street, e.g., for short] suggested heroin rather than kissy PDA; and I could only think about Superman for [Meaning of an embossed “S,” maybe], rather than the SIL of  répondez s’il vous plaît on an embossed wedding invitation. Felt more like a Saturday puzzle, but the rest of the grid was more pliant.

Four stars from me. How’d it treat you?

What a funky grid! Before I even dug into this puzzle, I just paused and admired the cool design of the black squares, jutting out from the top and bottom in little backwards “y”s. And then I started the puzzle, and as usual, found that Natan and I are just perpetually on the same wavelength with regard to what makes a good entry or interesting clue. This puzzle was a pleasure to solve. 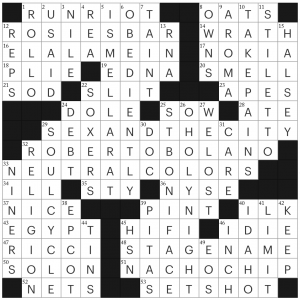 The staircase through the middle was crunchy and had a fun contrast to it, with ROBERTO BOLAÑO juxtaposed nicely with SEX AND THE CITY, and NEUTRAL COLORS rounding it out. I didn’t know ROBERTO BOLAÑO or his novel 2666, so I had to fill in much of his name from crosses, but they were all fair and I now have another book to add to my Goodreads list. The long downs crossing the staircase were also lovely, with I SMELL A RAT / OBEDIENTLY crossing through the west and ST BONIFACE / O HOLY NIGHT in the east. All solid, crunchy stuff.

Although his marquee entries are super solid, the highlight of this puzzle for me is the medium fill, like ROSIE’ S BAR, the “M*A*S*H watering hole,” and NACHO CHIP, perfectly clued as “Little dipper?”. The music clues also shine here, with NOKIA, a word that another constructor might have clued in terms of  a telecom company, instead clued as “New York-based rapper Princess ___”; STAGE NAME clued for Common (as opposed to one of countless other options); and HALSEY clued for the artist rather than the WWII admiral. So fun and fresh!

The last square to fall for me was the L of ROLLO/EL ALAMEIN; people disappointed by Admiral HALSEY‘s snub can rest easy knowing that at least one WWII tidbit made it into the puzzle! I’ve never read Nancy, and am absolutely out of my depth when it comes to military history, so this cross was tough but inferable.

Overall, many stars from me.

P.S. those interested in my quest to track media misrepresentations of crosswords, including in New Yorker comics, may enjoy the twitter account I created for this purpose: @Not_A_Crossword 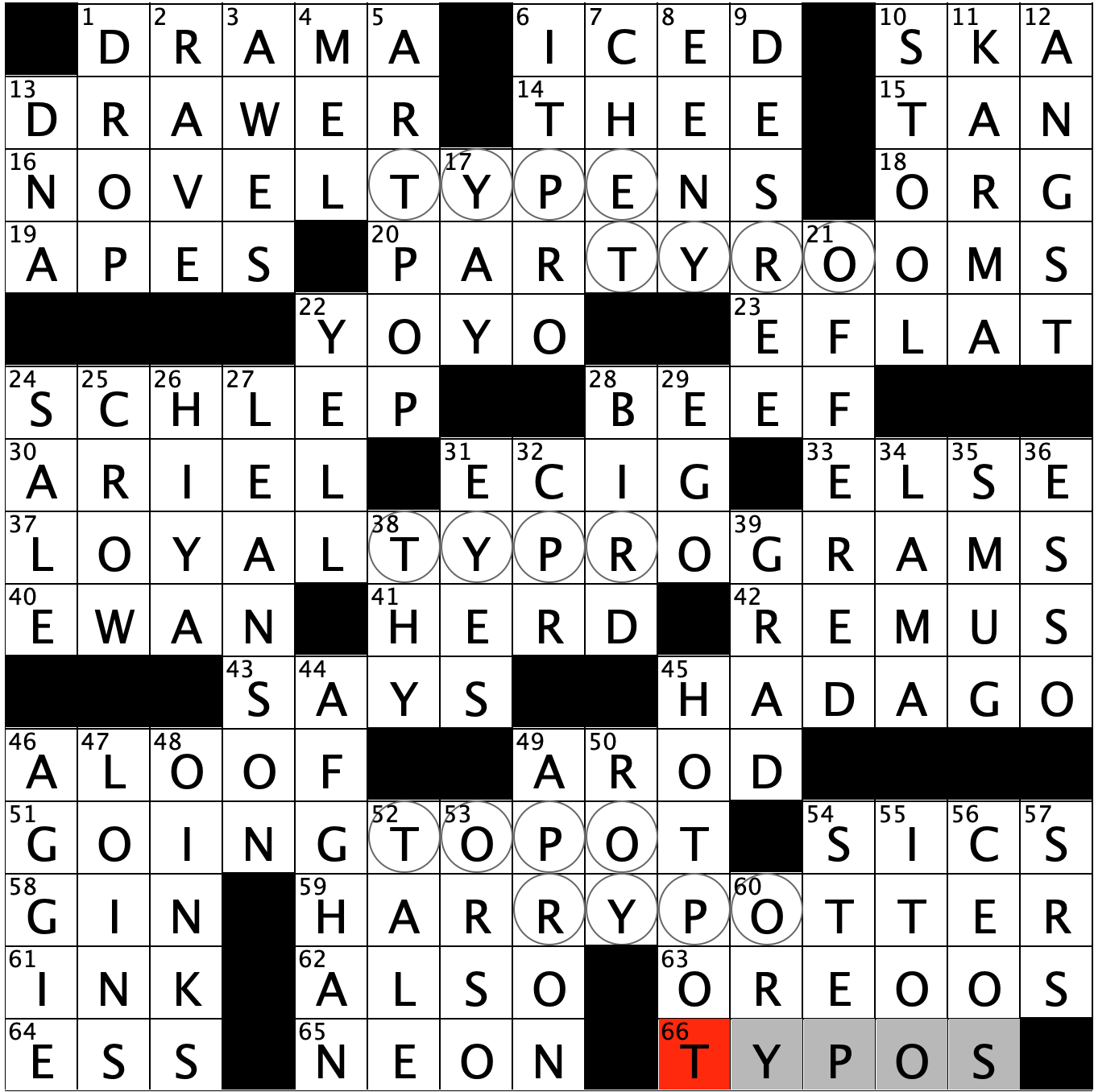 It has been a fantastic week for Universal puzzles that I get to review and today’s was no exception. I thoroughly enjoyed this solve and was even more impressed when it came to the bonus ERROR hidden in the TYPOS themselves. I love when there is a reason for theme answers beyond the revealer alone and this hit the mark so beautifully. The answers all stand on their own as legitimate entries, with my favorites as NOVELTY PENS and HARRY POTTER.

Getting a little nit-picky here, but I questioned my initial HOT POT entry because so many POTs in that corner – with HOT POT, HARRY POTTER and GOING TO POT all clustered like that felt a bit too repetitive, but the rest of the puzzle is really smooth – especially considering how much is accomplished with this theme, that I can accept it.

We have four theme entries with the same clue: [Joint venture?] 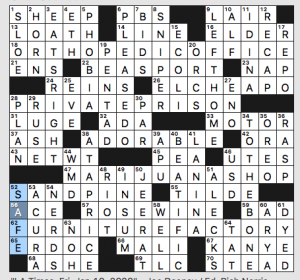 All solid and an overall entertaining theme.

What I didn’t know before I did this puzzle: that Timbuktu is in MALI. I think I mentioned this before. Clearly it didn’t stick. Geography, man. Not my strong suit. 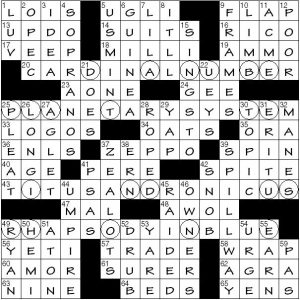 Through compounded incompetence (mostly mine) this belated write-up now comes to you.