If you’re here on a Saturday, you probably like more challenging crosswords, and that category includes metas. Season 9(!) of Pete Muller’s brainchild, Muller Monthly Music Meta, launches on Tuesday at the Washington Post. Give it a look! 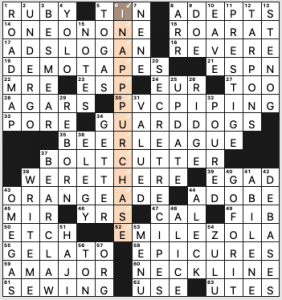 Look at that gaping chasm in the middle of the grid! Six 9s or 10s stagger-stepped through the diagram, with crossings ranging from 5 to 13 letters. That’s fancy constructin’ there. Note that the grid’s got an extra row to accommodate the pair of central 10s.

Did this play more like a Friday puzzle for you? It did for me. I plunged right into the midsection, guessed GUARD DOGS might work for [Dobermans and mastiffs, traditionally] and confirmed the first letter via attention-GETTER, and I was off to the races. Didn’t hit any trouble spots, so it felt Fridayish to me.

Two-word job descriptions are formed by taking the job title (second word) and anagramming it to form the first word. 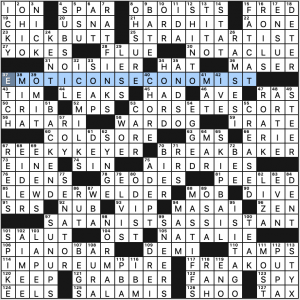 So…mostly good, but one that does not work at all. I mean at all. All the other job titles are absolutely valid; I’m even okay with a plain “assistant.” But “keyer” just does not work and should have been nixed, IMO.

In other news, I love the symmetrical pairing of KICK BUTT and FREAK OUT. How fun! RAT FINKS, PIANO BAR, “NOT A CLUE,” “OH SURE,” SKIP BAIL, SENATOR, MASTIFFS, SHINTO, HARD HIT, and COLD SORE are other highlights.

On the other hand, “IS IT A GO?” [“Are we all set?”] feels made-up. Other eyebrow-raisers include MASER [Atomic clock part] which apparently stands for Microwave Amplification by Stimulated Emission of Radiation, WAR DOG [The 102nd Infantry’s Sergeant Stubby, e.g.], SYNGE [“The Playboy of the Western World” dramatist], and PBA [Cop-supporting org.]. Regarding this last one, initial googling leads to the Professional Bowlers Association and the Philippine Basketball Association, and then PseudoBulbar Affect which is “a condition that causes uncontrollable crying and/or laughing that happens suddenly and frequently.” I had to google “PBA” and “cops” to learn it’s the Patrolmen’s Benevolent Association. Hardly common knowledge.

As for WAR DOG, I’m inclined to be more lenient toward it since I just finished playing the wonderful award-winning video game Valiant Hearts: The Great War which was not only fun, but filled with emotion and plenty of factual information about WWI. One aspect of it was that it highlighted the work done by dogs in the war as helpers for soldiers and medics. I highly recommend the game.

A lot of good stuff here but some really detracting questionable stuff as well. 3.3 stars. 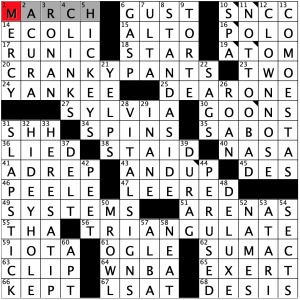 I believe I have seen this byline once or twice before. Erik and Wyna, how many times HAVE I seen this byline? I solved this puzzle in Across Lite instead of Black Ink, which shows my stupid mistakes I made in the NE corner of this grid. Still finished in around 6 minutes, so it wasn’t too hard. Maybe I rushed too much. Still a fun puzzle. I am getting waaaay behind on my USA Today puzzle solving now. I didn’t do them for so long, but now I HAVE to! 4.5 stars for this fine themeless collaboration.

Lot’s to talk about:

That is all! Back on Tuesday with another LAT puzzle write-up. 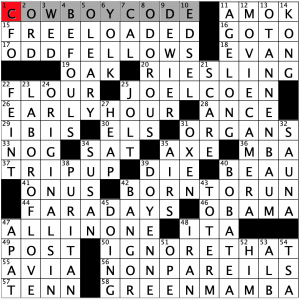 This one played like a true Stumper. Well over 20 minutes for me, and there may or may not have been some Googling involved! I did re-download Across Lite to see if it works, and it does seem to work with macOS Catalina now. I like Black Ink better for solving, but Across Lite makes a better web image. Whatever they did, they fixed the timer issue! It now stops when you’re finished!! Now if only you could change fonts like on the Windows version …

Anyway, I digress. This puzzle was flat-out hard. Several obscure terms, at least to me. All of you people that love uber-hard puzzles, you should be ecstatic over this one. 4.6 stars.

Have a fantastic weekend!