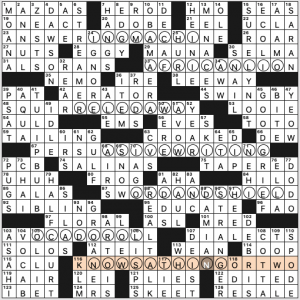 The theme entries are seven unrelated phrases that happen to include a letter string that can be anagrammed to a state name:

I’m generally a fan of geography and anagram themes, but this one didn’t quite deliver the goods. And I’m pretty sure that there are software methods of finding phrases or words that include an assortment of letters, so it’s not likely that the constructors toiled with scratch paper trying to devise a workable list of themers.

Make that four things, as I’m told dinner is ready. 3.5 stars—solid fill and cluing, wished for more fun in the theme.

Guess I’m obligated to say right off the bat that I’ve never seen Star Wars. It’s not like I’m trying to avoid it… someday I’ll get to it! However, I’ve done enough crosswords where I’m fairly comfortable with the main characters and settings, so even with my limited knowledge I did ok here.

THEME: The characters C3PO and R2D2 are both represented in common words/phrases. 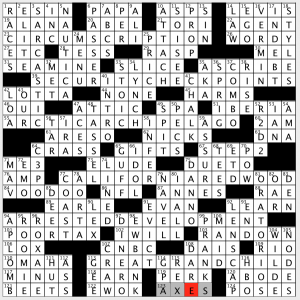 Jam packed weekend, so I gotta be quick. This is sure to delight the Star Wars fans among us, but it really isn’t dependent on knowing much about the franchise at all beyond the very basics that appear in crosswords regularly, so kudos to that!

My favorite answer was ARRESTED DEVELOPMENT, not only because of the snappiness of the answer, but I like that the Rs and the Ds are right next to one another. Really sells R2D2 visually.

And of course, lots of other bonus Star Wars stuff sprinkled throughout. Part of me wonders why Evan didn’t hold off to publish this in May. May 4th is Star Wars Day, right? It’s on a Monday this year, which seems close enough to Sunday to get away with it, but perhaps that’s a tad too inelegant to publish on May 3rd?

The only other thing is I feel like I’ve definitely seen this idea before. Maybe not with both characters at the same time, but at least one of them (probably R2D2). Not that it matters. It’s well done here and themes are bound to be reminiscent of one another. That’s just the nature of it.

I assume the title of the puzzle is a play on words from a movie quote? That would make sense…

P.S. Really liked the clue for WORDY [Like this clue, which is unnecessarily verbose and could be way more succinct than it is]. Hahaha!

All the theme answers are in the downs and they have “up” added at the beginning – “above” the base phrase. It was fun to solve. 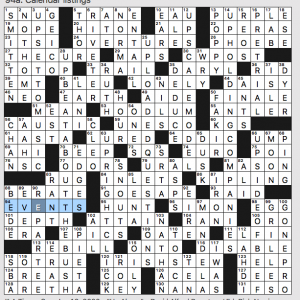 All the base phrases are solid and all the altered answers are amusing. A fun Sunday theme!

What I didn’t know before I did this puzzle: that the TRANE company is based in Dublin, Ireland, and that ARETHA Franklin won a Grammy Lifetime Achievement award in 1994.