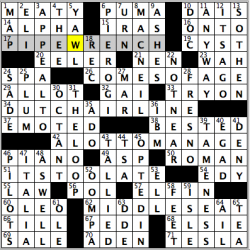 Today’s grid, brought to us by the long-time CrosSynergy contributor, Mr. Alan Arbesfeld, hits on one of my nightmares when this 6-foot-4 crossword blogger books a flight: being assigned the middle seat! There are five theme entries that all contain a “hidden” seat, with letters embedded in the middle of each answer spelling out a type of seat. The sixth theme entry, MIDDLE SEAT, acts as the reveal (62A: [Cramped spot for a plane passenger…or a hint to something hidden in 17-, 26-, 34-, 42- and 51-Across]).

I liked that none of the theme entries seemed forced in executing the theme, which never hurts when trying to appreciate the grid as a whole. Yes, there’s ALLOT in the grid, which looks almost a carbon copy to the beginning of  “A LOT TO MANAGE,” but that was not anything that stuck in my craw (29A: [Apportion]). Was there a meta that was a nod to the Windy City in the grid? Sure seemed like it, not only with THE LOOP (31D: [Business district in downtown Chicago]) and ELL (53D: [Building wing]), but with a delicacy that, as far as I remember, is a Chicago staple, the PIEROGI (6D: [Polish dumpling]). Now I feel bad that Amy is not in this pace talk more about more of the awesomeness contained in the City of the Big Shoulders.

Was definitely a dated feel with some of the entries, with answers such as EGAD (40D: [“Omigosh!”]), ELSIE (68A: [Cow in classic borden ads]) and one-half of The MACNEIL/Lehrer Report (8D: [Newsman Robert, former PBS partner of Jim Lehrer]). Almost any highlight for me in observing grid entries is the inclusion of African geography and/or African excellence, and that definitely is in this grid with the inclusion of Helen Folasade Adu, a.k.a. SADE (24D: [One-named hitmaker born in Nigeria]). Favorite Sade song? Definitely “Smooth Operator.” What’s yours?!?

For those who are sports averse, here is hoping, for your sake, that current Philadelphia Phillies pitcher and 2014 first-round draft pick Zach ELFIN does not become a superstar in the Majors, therefore justifying his name in grids as an alternative to the clue presented in today’s offering (57A: [Small, like Santa’s helpers]). Elfin did lead the National League in complete games in 2019, so…

“Sports will make you smarter” moment of the day: PILOTS (46D: [Their prospects are up in the air]) – In 1969, Major League Baseball expanded by four teams, but one of those teams lasted all of one season in the city where it originated. The modern-day Milwaukee Brewers were born as the Seattle PILOTS in 1969, as Seattle was given an expansion team because, in part, of baseball’s popularity, via Minor League Baseball, in the city. However, due to financial troubles and worsening conditions at Sick’s Stadium, the Pilots owner agreed to sell the team at the end of the 1969 season to a Milwaukee-based car salesman — future Major League Baseball commissioner Bud Selig. After Selig’s purchase of the team, he moved the franchise in 1970 to Milwaukee, where the team was rebranded as the “Brewers.” Seven years later, the city of Seattle was awarded another expansion team, the Mariners, who now hold the distinction of playing in one of the best ballparks in the bigs (T-Mobile Park, neé Safeco Field) and the distinction of being the only active MLB franchise to have never participated in the World Series. One day, Mariners fans! One day!

Here is hoping you did not mind my take on today’s grid, given the normal incisiveness contained in this space on Mondays regularly! Thank you so much for your time, and have a great rest of your day!

You know, this is a fire-related theme, and of course, all I can think of with is what’s going on in Australia. I realize this puzzle was created some time ago, but I’m thinking it might have been a better idea to hold off on running this puzzle until a quieter time. Of course, with the way our climate is changing, it’s always fire season somewhere. This USA Today article lists some places you might consider donating to in order to help those who are still battling the devastating blazes down there.

So, trying to separate that in our minds from the puzzle, SMOKEY BEAR is our revealer at 56a clued as [Character who’s wary of the starts to this puzzle’s theme answers]. 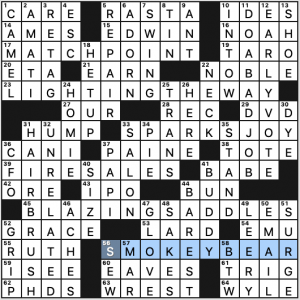 Again, trying to separate the puzzle from world events and think of, say, a festive bonfire, I like the progression here from match to blazing. It’s impressive that Evan was able to keep that progression while still maintaining symmetry.

The rest of the grid is solid though maybe not especially shiny. DO A BAD JOB is a thing I guess? I hear more about “early voting” than a singular EARLY VOTE. UNRELATED doesn’t particularly spark joy, and so that just leaves HAIR BRUSH as our most interesting piece of non-theme fill. Of course, now I’m thinking about brush fires all over again.

I could do without HET UP, especially on a Monday, and NOAH / WYLE might be difficult for anyone who was not a fan of ER or Falling Skies. We watched ER pretty regularly, at least early on, so this wasn’t too hard. I still remember his part in that  shocking Season 6 finale!

In the end, this is still overpowered by the Australian fires, even though the message here is one of prevention. I would have waited a while before running it. 3.5 stars for the puzzle. 2 stars for the timing.

Seriously, do consider donating to help. Here are even more ways to do so.

This was a pre-coffee solve for me today, so my bleary brain struggled in a few places it probably (hopefully?) otherwise wouldn’t have, but I still thought this was an overall solid themeless. Two central 15s, four vertical 10s, and two triple-stacks of 8s make this grid feel very open and lovely. My only gripes are with the fill holding all of that together, which I’ll get to below (but spoiler: MDSE???) 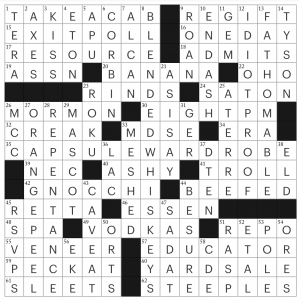 First, my own missteps that slowed me down:

Fill I could live without:

Fill aside, the long entries are great, and I appreciate the neat structure of the grid, but I’m not sure I can see past MDSE and ORTS. Maybe I’ll reconsider after I’ve had coffee? Several stars from me for the long entries and some clever cluing. 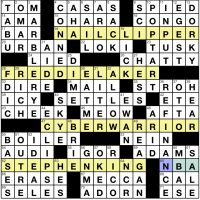 The end of each theme entry is the singular of an NBA team. A straightforward theme, though I’m curious to see how recognizable FREDDIE LAKER is to solvers. According to Wikipedia, his airline went bankrupt before I was born, so he’s new to me!

Other random thoughts:
– The bottom of the grid was tough for me, including the section with GNMA and NCR and the side with STROH and AFTA.
– The women in the grid? CHATTY Cathy, Scarlett OHARA, Monica SELES, and Alice in Wonderland. Some, but not much.
– Loved seeing POP TART in the grid! I don’t know that I’ve seen that before, and it felt like a vibrant pop.