Anyhoo, we have work to do. We’re treated to a Berry good grid that’s asking for a six-letter word. Fortunately for me, there are six long Across answers which suggests each entry will supply one letter to our answer. But how, exactly?

The grid was a fast solve. Probably my fastest for a Friday contest puzzle. Super smooth. But I finished without a clue as to the meta. So I made a list of those long Across answers and their clues, just in case those should come into play. 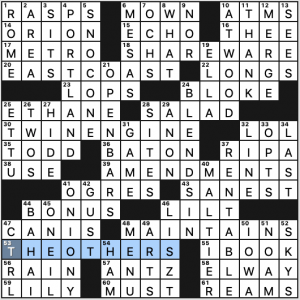 The answer may have jumped out you immediately. If so, bully for you. I wasn’t so lucky. My first thought is always to look at spanning words, so I noticed TWINE (and WINE) as well as THEO, but the other entries didn’t play nicely. So I looked at the title. Hmm. “Third time.” The number 27 (in 39a) is a multiple of three. The third letters of each entry spell out ASIEIE, which is nearly the sound I make when I can’t solve a meta.

Then I noticed THE OTHERS is essentially the third item in the list “this, that, and the other.” Aha! What else could I find? “East” is third in the list of “North, South, East, and West.” “Twin” is maybe third in “King, Queen, Twin.” But that’s kinda iffy, and, hell, what am I going to do with AMENDMENTS and MAINTAINS. Clearly this was the wrong track.

But I was stuck on “this, that, and the other” and couldn’t get it out of my head. So I let it sit for a few hours.

Upon my return, I stared at the entries, and it wasn’t long before I noticed that EAST and COAST end in the same three letters. And hey, same with SHARE and WARE. TWIN and ENGINE don’t have that feature, but there is a pair of INEs in there. A real Aha! this time since the last three entries have pairs of MEN, AIN, and THE in them respectively. Since we have two sets in each entry, that suggests there’s a third one out there in the grid, probably as part of a four-letter word, and that fourth letter is going to be the letter we need for the meta. Am I right? Yup, I’m right. Here then are the needed entries in order of how the theme entries appear in the grid: 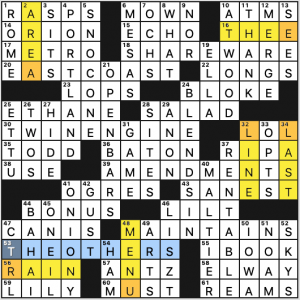 And so our answer is ALLURE. “ALLURE?” I asked. “How does that relate to the title?” But of course it does. As with almost every other Patrick Berry puzzle, there are layers, and then layers on layers. ALLURE can be a synonym for “charm” (see the puzzle’s title).

Holy cow this was beautiful. So smooth was the grid that there’s not even a whiff of anything theme-related anywhere else but the theme entries. Having six extra four-letter words means a lot of extra constraints on the grid, but you wouldn’t know it by looking at it. You would think the east, where LINE and LAST cross AMENDMENTS would be rough. Same with the south and southwest, which are crammed full with theme material. The worst we get is BAHAI, ONEIL, and CTRL. Nothing we’ve never seen before.

Just think of what you would have to do to build this. You’d need theme entries that contain a pair of three-letter strings, and of course, they have to be of symmetrical lengths in the grid. Having one rhyming entry (SHAREWARE) is fine, but having any more than that might give things away, so no more than one, okay? No WINE AND DINE, for example. Oh and did I mention the three-letter strings have to give rise to four-letter words whose fourth letter contributes to the meta answer? Well, they do. And the the main theme entries have to be in a set order; no fiddling around with the order just because they give you dodgy fill. And then you have to populate the grid with those extra four-letter words in such a way that they don’t cause too many compromises. And last but not least, you have to fill the rest of the grid with sparkly stuff like Margaret ATWOOD, ONIONY, OPEN BARS, BLENDS IN, PORTLAND and SNO-CONE. And just for kicks, see if you can make the whole thing solvable in under 5 minutes.

Yeah. Do all that, and you should be good.

This is why Patrick Berry is considered one of, if not the, very best at this game. And lucky us, we get to go along for the ride.