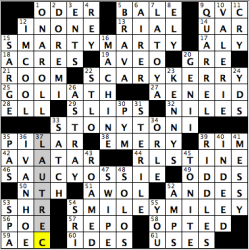 Good day, everybody! Hope you’re all doing well to start your Tuesday!

Today’s grid is a bit of rhyme time with a little bit of a twist. Each of the themes are puns that involve the first names of celebrities, as adjectives that start with an “s” appear right before them. To boot, when removing the “s” from the first word, the remaining letters, when pronounced out, also sound very similar to that of the celebrity’s first name.

There were a couple of real tricky spots in the grid, especially if one was not familiar with LAUTREC (37D: [“At the Moulin Rouge” painter Toulouse-___]). Add to that entry a couple of the crossings, AEC (59A: [HST-era nuclear agency]) and SHR, and that area becomes a possible bear trap (53A: [Wall St. trading unit]).  Then there’s the plural word of GENII, which is pretty weird to look at (20D: [Mythical wish granters]). But I’M COOL with some of those entries as long as many others make up for those tricky spots (12D: [Snowman’s “It’s all good”]). (Unless there’s slang for “snowman” that I don’t know about, I’m guessing we’re talking about the winter weather creation.) Like seeing a couple of noteworthy women in the grid as entries, including VALERIE (10D: [“Hot in Cleveland” actress Bertinelli]). And, in case one did not know, SATCH, as it pertains to its clue, is short for Satchel, a baseball legend whose quotes are just as noteworthy as those who believe Yogi Berra as being the king of funny quips in baseball (33D: [Pitcher Paige, for short]). Paige, who played professional baseball well into his 50s, was quoted as saying, “Age is a question of mind over matter. If you don’t mind, it doesn’t matter.” There are other real funny lines credited to him, and you should look them up if you have a chance.

“Sports will make you smarter” moment of the day: EMERY (38A [___ board (manicurist’s tool]) – A melancholy entry here, as we remember the life of former National Hockey League goaltender Ray Emery, best known for his time with the Ottawa Senators and Chicago Blackhawks. In the 2012-13 season, Emery won a Stanley Cup with the Blackhawks as he started that season with 12 consecutive wins in goal, an NHL record to begin a season. Emery also was the starting goaltender for the Ottawa Senators during their run to the Stanley Cup Final in 2007. On July 15, 2018, Emery drowned after jumping off of a boat on an outing while swimming with friends. Emery was 35. 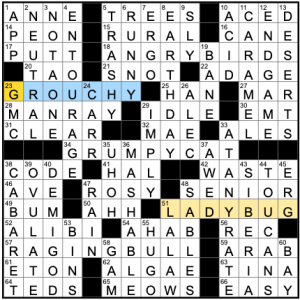 Hey, hey! It’s Team Fiend’s own Jim P with a theme that speaks to me since this evening has been migraine-annoying:

Really tight theme: each themer is a synonym for mad/disgruntled + a kind of animal. Mad dogs and wet hens are here in spirit.

Fave fill: ENTOURAGE, OVULATE, EARTH DAY, MASHABLE (not that I understand what the site’s unifying identity is), CARAMEL.

I talked with a Time reporter today about representation and inclusion in crosswords, so I’m in the mood to tally up today’s Bechdel score. In the “everyone but straight white men” zone, we have actress ANNE Hathaway, astronaut MAE Jemison, writer/comedian/actress TINA Fey, singer Vicki CARR, Liza Minnelli in the CABARET clue, and Susan Dey in the L.A. LAW clue, up against fictional HAN Solo, artist MAN RAY, fictional AHAB, fictional TED’S (You know there’s another Bill & Ted movie coming out this year, right? Starring the same two guys, now in their 50s. Also reprising his role as the Grim Reaper: William Sadler. Really psyched to see what Death is doing in the new story), and designer HUGO Boss. 6 – 5 = 1, a positive score. Yay! 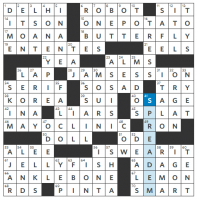 18A: BUTTERFLY [Caterpillar, after metamorphosis]
28A: JAM SESSION [Musicians’ improvisational get-together]
46A: MAYO CLINIC [Noted Minnesota hospital]
61A: JELLYFISH [Tentacled sea creature]
4D: HONEY PIE [Sweetie]
41D: SPREAD EM [Cop’s order before frisking, and what to do with the starts of the starred answers]

Today’s “Smear Campaign” is focused on smearing some tasty bread spreadables: butter, jam, mayo, jelly, and honey. Just don’t put them all on the same sandwich, please! A nice little theme, though I did wince a tiny bit at how the revealer evoked, for me, NYC’s famous failed (and racially targeting) stop and frisk program.

Other thoughts:
– We have a nice, more modern array of women in the grid today: [Polynesian Disney princess] MOANA, Hermione, [“Bleeding Love” singer ___ Lewis] LEONA, Nikita (a great example of how to include women in an otherwise general clue!), Edie FALCO, and Nancy ODELL.
– I had no clue that there is now a show called FBI. I can’t just default to plunking in CSI anytime I see CBS show with three letters anymore!
– I appreciated the clue [Ain’t correct] for ISNT as well as the DELHI clue [Indian city to visit for a nosh?]. 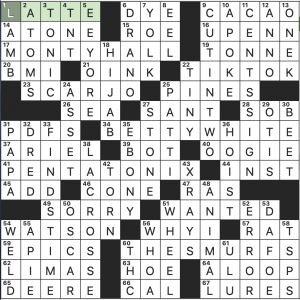 It looks like we have a series of puzzles in store for us. Not a bad idea when you have to crank out puzzles every week. With Matt’s grasp of trivia, something along these lines will surely be entertaining. The flavortext for the puzzle says “fun stuff from 2010 & 2011”, so I would think we have possibly five puzzles like this. Here are the theme entries from the first two years of the past decade:

Lots of trivia here, including some facts I didn’t know. 60A especially is a great piece of trivia. This list on Wikipedia shows the entire list, and sure enough they are almost all sequels! Some would argue most of what Hollywood produces anymore are retreads, but I guess if it ain’t broke … you get the idea. Nice to have six theme answers stuffed into this grid! Looking forward to the rest of these puzzles. 4.6 for this one.

More fun facts from this puzzle: 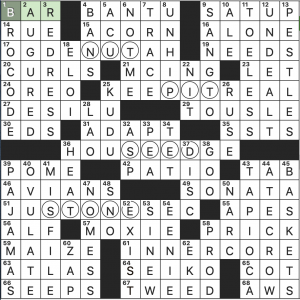 This puzzle is making me hungry … I think most of these references are food related:

I guess you could say these are all food related, right? Pits are in cherries, stones are in peaches, and of course seeds and nuts are edible in their own right. Time for a snack! Nice puzzle, Roland! 4.3 stars.

Love to see Evan’s name in the byline… it pretty much guarantees a well-crafted puzzle, painstakingly filled.

THEME: The word DATA is jumbled in theme answers.

Not that this is Evan’s fault in any way. The puzzle here is fine and the fill strong (BILL HADER for the win!). Sure the theme type is familiar, but as long as the revealer is strong and snappy (which it is here), it’s perfectly valid fare.

TOSTADA stands apart as an outlier for sure. The other answers are all two-word phrases with the “corrupted” DATA bridging the words. TOSTADA is just like… TADA! Here I am!

P.S. Is the term “Ticket scalper” 12D offensive? I avoid the term because I don’t like the imagery that comes with the word “scalper”… but I’m unsure if I’m alone there or if others consider it distasteful for different reasons.