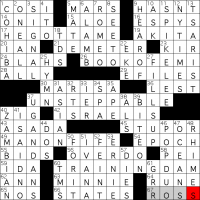 hello and welcome to episode #606 of matt gaffney’s weekly crossword contest, “Mo’ Better Clues”. riffing on the answer to last week’s meta, matt challenges us to name a Denzel Washington movie. what are the theme answers? like the puzzle title itself, each is a one-letter change from an actual denzel movie title:

taking the original letters that were changed in the titles spells out GLORY, which is also a denzel washington movie and the answer to the meta. curiously, it’s the only one of the six actual denzel movies referenced in the puzzle (seven, if you include the title) that i’ve actually seen. i’m not much of a movie watcher, but this one was shown in my 11th-grade u.s. history class. it’s also based on the robert gould shaw memorial, a landmark in boston common i’ve seen many times.

this meta felt easy enough to be a week 1 rather than a week 2, but i thought it was great fun. it’s a very playful theme, and i smiled several times as i imagined what these alternate movies might be about.

that’s all i’ve got this week. hope to see many of you this weekend at mystery hunt!